Love These New Sixers-Themed Nikes? Sorry, You Can’t Have Them.

There are only 10 pairs, and they’re reserved for Philly celebs. As if we needed any more proof that sports are becoming the domain of the über-rich and elite. 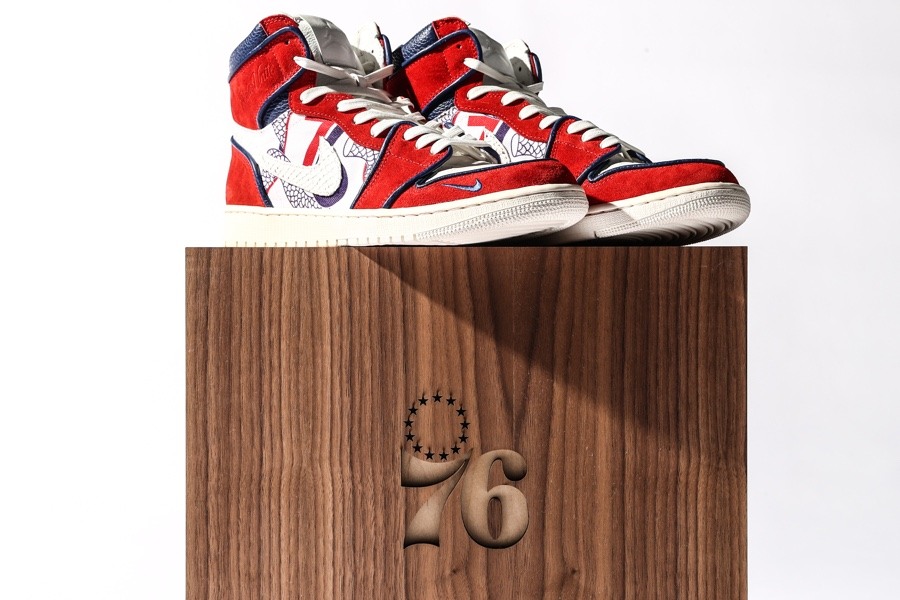 You may have heard: The Philadelphia 76ers are an exciting basketball team. The “Process,” that years-long period of self-imposed bottom-feeding in order to return stronger than ever to the pinnacle of the NBA, is finally paying off. The team began its playoff campaign on Saturday, it has genuine stars in Joel Embiid, Ben Simmons, and Jimmy Butler, and maybe most important of all, it now has a growing cabal of celebrity supporters.

Big-time celebrities have been known to indulge in big-time status symbols, and the Sixers have made a concerted effort to cater to this new class of fans. Most recently, the team collaborated with local shoe store UBIQ to produce 10 limited-edition pairs of Sixers-themed Air Jordan shoes. Unfortunately, you can’t have them, because these are invite-only sneakers, intended for prominent Philly celebrities. (Some of the recipients include Carson Wentz, Rhys Hoskins, and Kevin Hart)

You can’t exactly fault the Sixers for trying to appeal to their richest and most visible fans. But as ticket prices across all major sports leagues continue to rise, relegating lifelong supporters to their couches, it’s hard not to see something sinister reflected in this special celebrity sneaker ploy.

It’s counterintuitive, but popularity in American sports can actually be a very dangerous thing for the average fan. According to the laws of economics, when the demand for a product increases, so too does the price. But here’s the thing about demand: It’s different for everybody. So maybe you value a ticket, for middling seats, to a 76ers basketball game at $50. Well, if the team suddenly becomes the New Hot Thing, and bunch of rich dudes decide they want those middling seats, they’re going to be willing to pay more. Next thing you know, those prices spike to $200 — which was the average cost of a Sixers ticket on the resale market this year — and you’re out of luck.

Sports are supposedly the great unifier in society, bringing people from all walks of life together. But more and more they’re becoming just another playground for the elite. The average ticket to a Golden State Warriors basketball game in Oakland this season cost more than $450 on the secondary market. The price of admission for NFL games is up almost 25 percent since 2012. And the cost for big-ticket items like the Super Bowl routinely reaches $3,000 on the low end. You might say, Well yeah, those are the biggest games, so of course they’re expensive. But should wealthy people really have a monopoly on everything but the mid-week baseball day game?

Other countries with popular sports leagues have decided the answer to that question is no. In the English Premier League, where tickets are regulated, average price this season was about $40. Meanwhile, only three percent of all tickets sold cost more than $75. Of course, English soccer clubs could theoretically charge more for their tickets, but the league has made a concerted effort to maintain that idealistic sporting ethos of equality, instead of letting go of the reins and allowing the market to gallop up all the way up to the stratosphere. Not to mention, in England, the secondary market — often the source of the most egregious price-gouging — is literally illegal when it comes to selling soccer tickets.

But this is America, where any efforts to control prices are met with cries of “Socialism!” So franchises continue raising prices, erecting a gilded gate around their seats. And increasingly, only the elite have the key. For this new generation of high-paying sports fans, the reason for attending a game becomes as much about proving you could afford to be there as it is the actual joy of witnessing the competition.

These custom Sixers shoes are just another status symbol — one the team readily admits is aimed at a small group of elite sneaker fans. “We sought to engage in the powerful and influential following they possess and capitalized on the appeal of limited-edition sneakers,” says Sixers VP of business development Desron Dorset. The “appeal,” by the way, is that you can’t have them.

Well, that’s not entirely true — the team is currently giving away two pairs of the sneakers online, in at least a perfunctory attempt at inclusion. But even that feels insulting, like being fed leftover scraps.

See, to be given these shoes defeats their entire purpose. Anyone wearing them will know they are an imposter in kicks that were not really meant for them. Because what these shoes are really about is status. And that is something no amount of good fortune in a raffle can buy.