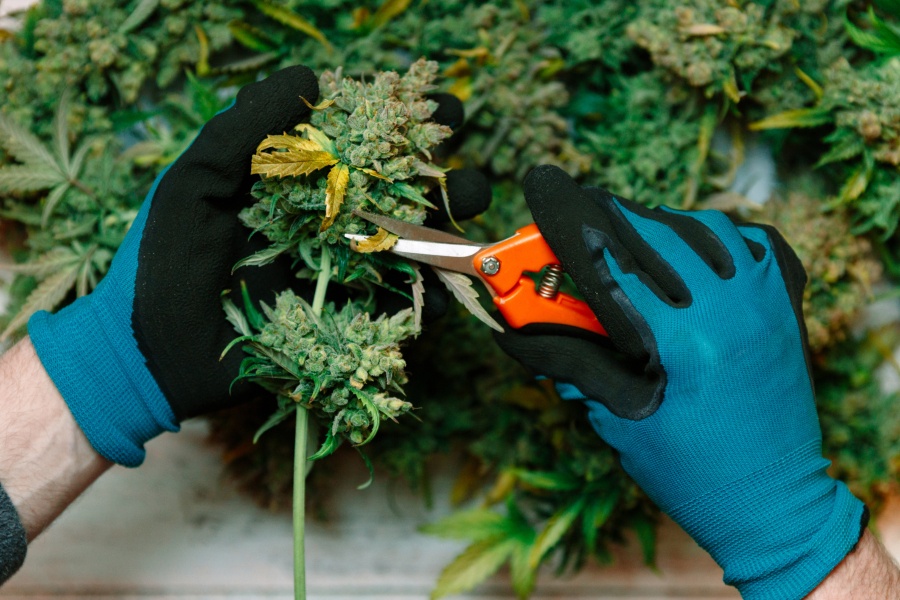 The green stuff. | Photo by VictoriaBee via Getty Images

This post has been updated to correct the current status of marijuana legalization in Pennsylvania’s neighboring states.

Pennsylvania is slowly boarding the recreational marijuana train. In recent months, Gov. Tom Wolf has said he’s open to it. Lt. Gov. John Fetterman said he wants to visit every county to talk about it. And soon the state will have a fresh opportunity to legalize it.

Just in time for spring, state Senators Daylin Leach and Sharif Street say they plan to introduce a bill that would legalize recreational cannabis for adult use in Pennsylvania. The legislation would be structured around cashing in on the industry’s economic benefits and combatting criminal justice system effects that have been shown to disproportionately harm low-income residents and people of color.

“An end to the prohibition of cannabis is overdue,” Street said in a statement. “It is time for us to join the emerging cannabis economy with the legalization of the adult use of cannabis in [Pennsylvania], which should not be a crime when responsibly used by adults nor mandate medical oversight.”

Of course, it’s worth stating right off the bat that any effort to legalize recreational marijuana faces an uphill battle in Pennsylvania’s currently GOP-dominated state legislature. (I mean, our Democratic governor just started warming up to the idea.)

Still, if far off, a future in which Pennsylvanians can legally enjoy a little recreational weed feels somewhat inevitable. Ten states and Washington, D.C., have now legalized marijuana for adult use, and 33 states have green-lighted medical cannabis (including Pennsylvania). Among our neighbors, New York is seriously considering legalization, Delaware nearly passed a law in 2018 and is expected to try again this year, and New Jersey is expected to vote on it as early as next week. According to a September 2017 Franklin & Marshall college poll, nearly 60 percent of state residents support legalizing marijuana. Oh, and Pennsylvania auditor general Eugene DePasquale has said that legalizing, regulating, and taxing the herb could generate $581 million per year in state revenue.

It's official. After months of work, Senator Street and I have dropped our Adult-Use Cannabis co-sponsorship memo. If you'd like to see what's in it, you can look here. Now, we need everyone's help getting it passed! #CannabisCommunity #CannabisNews https://t.co/D5m5uJjGFK

Leach and Street said they’ve met with hundreds of residents over the past year a half (as well as with advocates and stakeholders) to gather feedback on recreational marijuana. Last year, Street hosted a two-day conference at Temple University Medical School that focused on fostering minority participation in the cannabis industry. More than 700 people participated, including event speakers Mayor Jim Kenney and U.S. Sen. and now-presidential candidate Cory Booker.

If passed, Leach and Street’s bill would establish a tiered system of licenses for growers, with lower barriers of entry that would allow “those with more limited resources” or lower income to enter the cannabis industry as entrepreneurs, the duo said. In addition, it would provide for automatic expungement of past criminal convictions of cannabis-related offenses, including possession and delivery of less than an ounce. The bill would also allow for the commutation of sentences resulting from those convictions.

According to the American Civil Liberties Union, members of minority communities in the U.S. are arrested for cannabis-related offenses at four times the rate of white residents, despite similar use rates. The senators said that in Pennsylvania, cannabis-related charges result in more than 25,000 Pennsylvanians, disproportionately people of color, entering the criminal justice system.

“Cannabis prohibition was built on lies and racism and has resulted in literally hundreds of thousands of Pennsylvanians suffering criminal convictions merely because they chose a plant instead of an alcoholic beverage,” Patrick Nightingale, executive director of Pittsburgh chapter of the National Organization for the Reform of Marijuana Laws, said in a statement announcing Leach and Street’s bill.

An end to the prohibition of cannabis in PA is overdue, the economic imperatives equal the moral mandate to correct damage that disparate enforcement of Marijuana laws has done throughout numerous communities.
Visit https://t.co/vYCHYGmIXK #legalizepa #letsgrowpa #CannabisNews pic.twitter.com/ClzHBen5Ou

In addition to its potential criminal justice impact, the legislation would funnel tax revenue toward public education, allowing individual school districts to choose what portion of revenue to dedicate to property tax relief. It would also permit the consumption of cannabis for anyone over the age of 21, and it would allow individuals to grow up to six plants for personal consumption. (Residents will not be permitted to sell plants, though, and consuming cannabis in public would be prohibited.)

In 2016, Leach (who has faced calls to resign amid sexual harassment accusations, which he denies), cosponsored the Senate bill that Gov. Wolf later signed to legalize medical marijuana in Pennsylvania.

Legalizing recreational cannabis use “will be a tough battle,” Leach said, “but so was passing medical marijuana. We did that, and we will do this.”