Protesters criticizing the longtime councilwoman’s use of councilmanic prerogative on Tuesday night claim that they were “terrorized” for trying to hold her accountable. 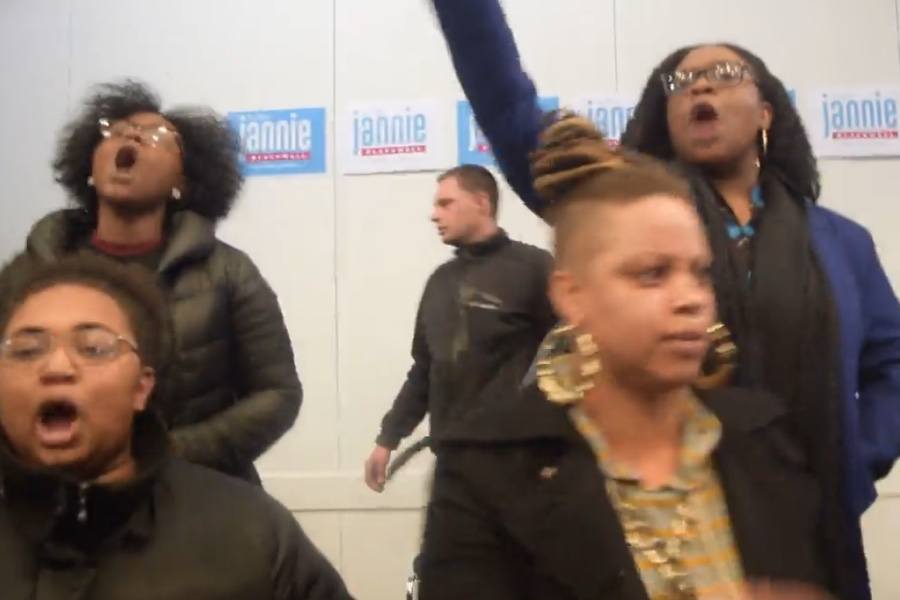 Screenshot of protesters from footage taken at a campaign event for City Councilwoman Jannie Blackwell.

A reelection kickoff event on Tuesday night for veteran City Councilwoman Jannie Blackwell was marred by a series of violent threats and an alleged attack against a group of progressive activists — caught on video — by supporters of Blackwell’s campaign.

Approximately an hour into the gathering, hosted at the Enterprise Center in West Philly and attended by such notable political leaders as state senators Vincent Hughes and Anthony Williams, and former U.S. Rep. Bob Brady, 12 activists from the Black and Brown Workers Cooperative and Philly for REAL Justice disrupted the event to highlight concerns surrounding Blackwell’s use of councilmanic prerogative.

Recent tensions between the activist groups and Blackwell, who has represented the 3rd Council District for more than 25 years and is currently being challenged by former Fairmount Park Conservatory executive director Jamie Gauthier, stem from a disruption of a community meeting Blackwell held on January 29th. At that event, regarding the redevelopment of 4601 Market Street, BBWC co-founder Shani Akilah confronted the councilwoman and other panelists on gentrification issues in West Philly. A clip of Akilah’s speech has been viewed more than 300,000 times on Facebook.

As they entered the building on Tuesday evening, the activists say, they faced immediate suspicion and surveillance from a number of people wearing Blackwell campaign buttons who appeared to be helping to manage the event.

Philadelphia magazine obtained the following videos, which were filmed by two protesters and contain profanity and threatening language. Neither Blackwell nor her campaign staff members responded to requests for comment on the incidents depicted in the footage.

As the first video begins, Blackwell has already left the stage, and activists are engaging with other attendees and attempting to chant over amplified music in the room. The first threat comes at the 7:50 mark, when a man guarding the stage appears to tell one of the protesters: “Watch your back or you’re gonna get arrested. I’m not playing. I will shoot you, no problem. I will shoot.”

As the protesters begin to leave the stage area at the 10:35 mark of the clip, a scuffle breaks out and the scene turns chaotic. Aurica Hurst, a member of Philly for REAL Justice and an organizer for One Pennsylvania, says this portion depicts her attack by a group of event attendees.

“They terrorized us,” Hurst said. “I was punched in the face and fought for my life as women from the crowd pulled my hair and attacked me. My comrades had to help pull me out of the shuffle. All of this because we were practicing our First Amendment right to protest.”

The following clip, which shows the altercation from a different angle starting around 10:47, continues as the activists are escorted out of the Enterprise Center and into the parking lot. At the 12:00 mark, two Blackwell supporters can be heard in a verbal altercation with some of the activists over their commitment to the community.

Things escalate even more when Michael Youngblood, a former Blackwell aide who was convicted of 34 counts of extortion, bank fraud, tax evasion, and failure to file tax returns in 1999, began to direct rape threats at the activists.

In the following clip, Youngblood is seen pointing at the activists at the :06 mark and saying twice what sounds like “You wanna get raped?” He then approaches the camera and at the :11 mark appears to say “I’ll get you fucked in the ass. You want to get fucked in the ass?” Youngblood could not be reached for comment for this story.

“It was shocking,” said activist Nolwazi Monique, who protested at the event. “In one breath, the men cataloged all the so-called good they’ve done for the community. In the next, they’re threatening to rape us.”

None of the activists were arrested, and police said no report was taken on the incident after they were called to the event.