Backyard Chickens May Soon Be Legal in Philadelphia

“I’m so excited!” says Maureen Breen, leader of the backyard chicken movement in the city. 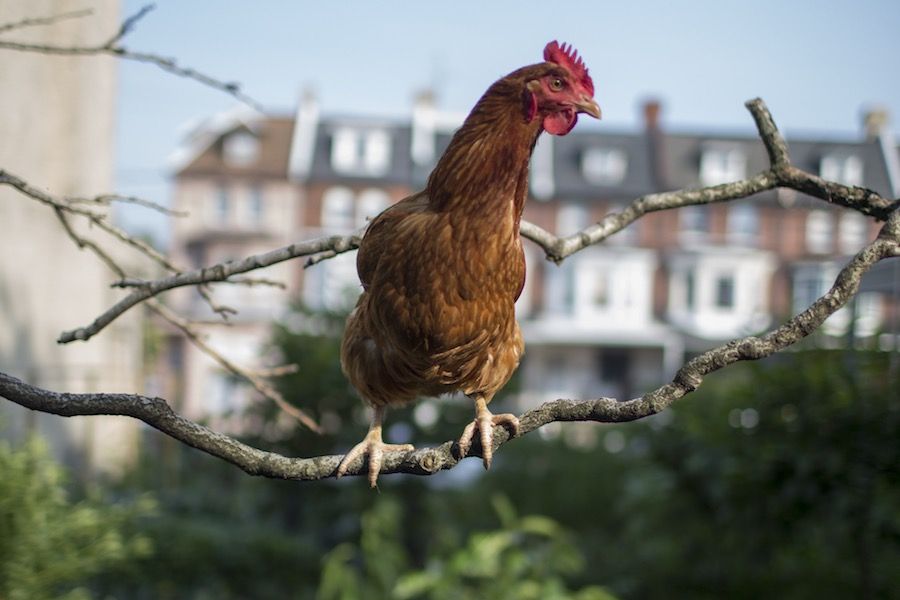 A chicken in West Philadelphia. (Photo by Neal Santos)

A bill has been introduced in City Council that would legalize backyard chickens in Philadelphia. Oh, they don’t really have to be in your backyard, per se. That’s just what people who own chickens in urban areas tend to call them, so we’ll just go along with that.

The city prohibits residents from keeping farm animals on their property, and the law currently defines farm animals as follows: “Any chicken, goose, duck, turkey, goat, sheep, pig, cow, or other farm animal, provided such other farm animal presents a public nuisance due to smell and/or noise. Does not include a cat, dog, or horse.”

“Wait, they won’t let you have chickens but a horse is allowed?” asked my daughter incredulously upon reading the city code.

But Henon’s bill would change the definition of farm animal to be: “Any rooster, goose, duck, turkey, goat, sheep, pig, cow, or other farm animal, provided such other farm animal presents a public nuisance due to smell and/or noise. Does not include a cat, dog, hen, or horse.”

In other words, should the bill pass, you would be able to keep hens at your house — you just wouldn’t be allowed to have roosters, thanks to their penchant for cock-a-doodle-doo-ing at 4 a.m. and, well, their relative worthlessness. (Hens don’t need roosters around to lay eggs, in case you forgot your animal husbandry 101.)

“I’m so excited,” says Maureen Breen, a Fox Chase resident and Drexel professor who has found herself the unofficial leader of Philadelphia’s backyard chicken movement. Her Facebook group is Philadelphia Backyard Chickens, and she’s currently circulating a Change.org petition to support the backyard chicken bill.

Breen and her renegade chicken-owning pals have been lobbying City Council for years to change the law, but she says she had no idea that the bill was going to be introduced.

“This came as a complete surprise to me,” Breen explains, adding that Henon has been “really supportive” of the idea. In 2017, Henon and Breen helped a Northeast Philadelphia woman named Stephanie Morrell-Wishahi get a zoning variance that allowed her to keep chickens on her property after she was fined by the city for having them there illegally. At the time, Morrell-Wishahi was one of only two Philadelphians to receive a variance.

“I think she’s a prime example of why people want to have backyard chickens and what they can produce, and why not just having a smart pet but a productive and a food-sustainable pet is important,” Henon said of Morrell-Wishahi in the Metro in 2017. (Henon did not respond to requests for comment on this story.)

So if you’re getting excited about the prospects of owning backyard chickens in Philadelphia, you may be wondering what’s involved.

Well, first, you need to build a coop and one that can keep intruders out. A neighbor of mine in West Philadelphia had her entire illegal chicken population wiped out by a fox. Breen says that most people spend around $500 to build a proper chicken habitat, though she points out that you can buy one for $100,000 at Neiman Marcus. The chickens can stay outside year round, and Breen notes that it’s actually summer that’s hardest on them, not winter.

“They have natural heating with their feathers,” she says. “But in the summer, you want to make sure they can get out of the sun and find some shade.”

A half dozen chicks will cost you about $30, and then you’ll spend another $50 or so raising them into egg-laying entities. Breen says you should expect 150 eggs out of most hens annually, while some breeds will produce 250 in a year.

When it comes to feeding your backyard chickens, Breen emphasizes that you don’t need some special feed. Breen says that backyard chickens are very happy with plate scrapings and food that you might otherwise throw away: the bottom of a lettuce head, stale cereal, shrimp shells, egg shells, and garden tomatoes that the squirrels have gnawed on, just to name a few examples.

But Breen cautions that you shouldn’t just go out and buy some chicks without seriously thinking about it, and she teaches a chicken-keeping class in Glenside that she hopes will screen out people who just want to latch onto the newest hip urban living trend.

“You need to realize that it’s a living animal that you are bringing into your backyard,” she says. “It’s like taking on the responsibility of a dog or a cat. I had one woman come to my class and she walked away saying ‘I just can’t handle this,’ and I was so proud.”

As for the roosters, Breen says you shouldn’t feel bad for them.

“You definitely don’t need a rooster!” she insists. “They are noisy and you don’t need them.”

Philadelphia photographer and backyard chicken enthusiast Neal Santos said he had a rooster among his flock until a neighbor complained about the noise.

“So we just made some soup out of him,” he remembers. “And then everything was fine.”