Scenes From the Campaign Trail: That Time Jewell Williams Held a Ladies Night

The controversial sheriff wasn’t exactly pleased to see a reporter at his event in North Philly minutes after news broke that the city had settled a sexual harassment case against him. 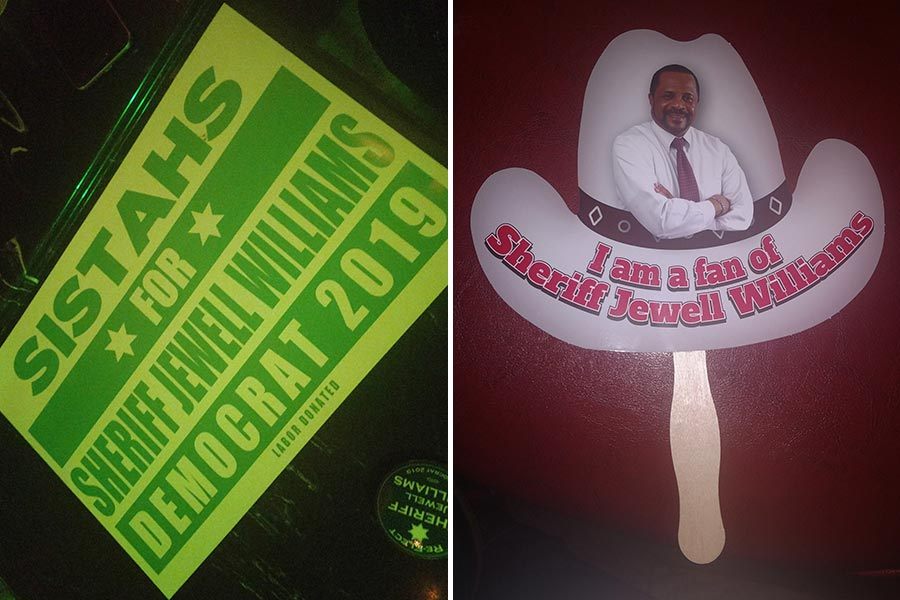 “Jewell’s been having a bad day.”

I had just arrived at Champagne Cafe, a lounge on East Chelten Avenue in North Philly, around 7:40 on Wednesday evening. Word had gotten around that embattled Philadelphia sheriff Jewell Williams would be appearing at a popular “Ladies Night” hosted at the spot to kick off his re-election campaign among a sea of supporters — “Sistahs for Sheriff Jewell Williams.” 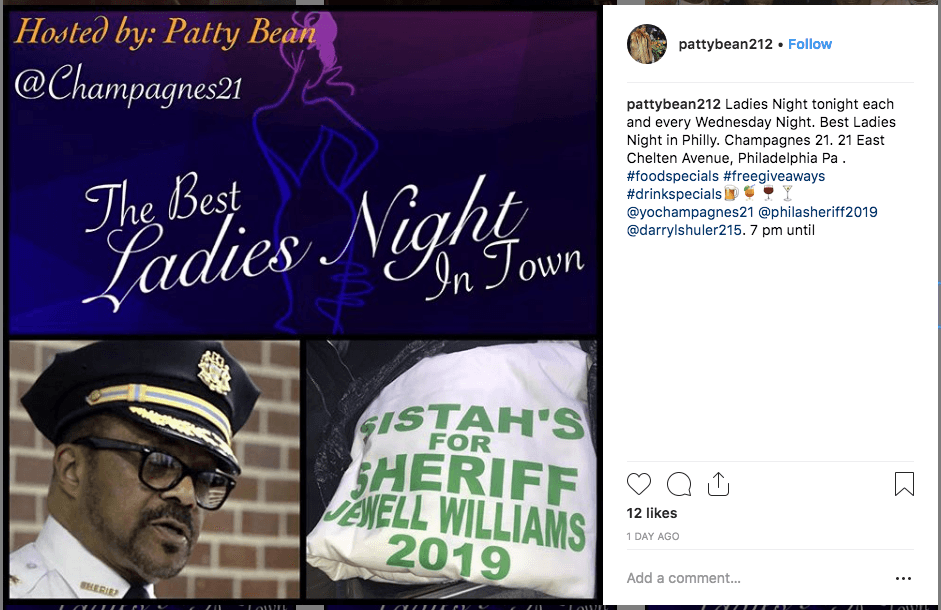 This I could not miss.

About 20 minutes before I walked in the door, the Philadelphia Inquirer reported that city officials had agreed to pay a $127,500 settlement to a former Sheriff’s Office employee who had sued Williams for allegedly sexually harassing her.

This is the second time taxpayer dollars have been used to resolve a sexual harassment case involving Williams; in 2012, the Democratic Caucus of the state House of Representatives paid a former legislative aide $30,000 after she accused Williams of misconduct while he was a state representative. Williams, whom Mayor Jim Kenney has twice called on to step down, is still facing another federal lawsuit filed by another former Sheriff’s Office employee alleging that he sexually harassed her on the job. (Williams has repeatedly denied all of these claims, and his lawyer said he was not involved in the city’s decision to settle.)

Naturally I asked one of Williams’s campaign workers if the candidate would be available for comment, and that’s when I heard about the “bad day.” “The media’s been asking him questions about a lot of lies,” the worker said, “and there’s a gag order he must follow.”

I made my way to a private reception room littered with white-and-green campaign materials in the process of being set up by a group of nearly two dozen black women wearing white “Sistah’s for Sheriff Jewell Williams 2019” T-shirts. Rounding out the party atmosphere were green and white balloons, signs, and a cake with his name. 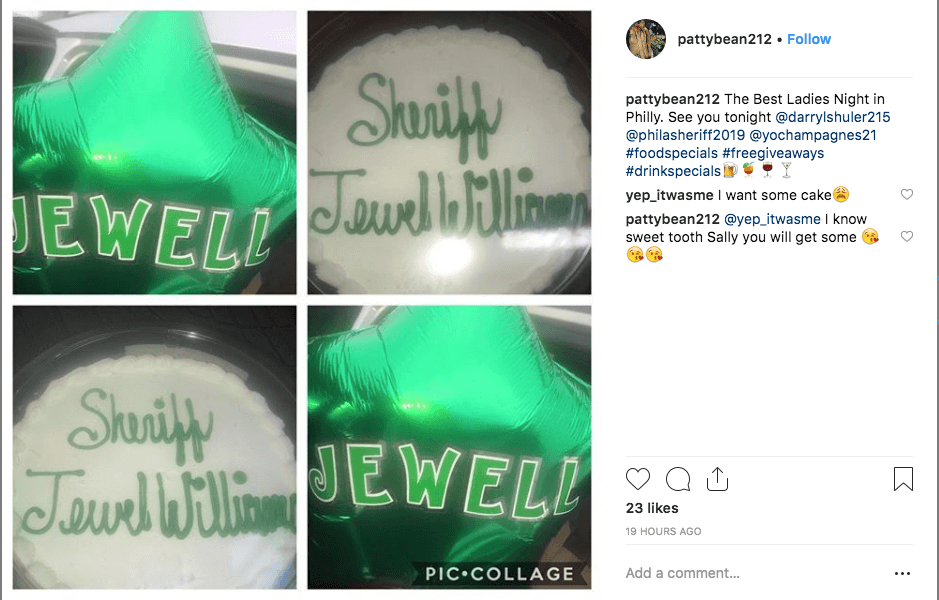 Soon Williams himself entered. He zeroed in on me among the small crowd of women and gave me a glare so strong I nearly rocked back. Was it perhaps the op-ed I wrote last week suggesting that Martin Luther King, Jr., would have rolled in his grave to find out that Williams was receiving a “Drum Major” award in his honor? Or could it have been that three elected officials recently told me that they wouldn’t be endorsing him after a now-deleted Instagram photo of them having lunch together had suggested otherwise?

Either way, Williams wasn’t having any of it.

“He got the wrong one,” Williams angrily said to a campaign supporter who was pointing at me. “I’m not the one to play with.”

Whispers began to float around the room.

“Why are you here?” a Williams supporter interrogated me.

“I’m a journalist covering his re-election campaign,” I answered.

“Well, don’t believe the fake news they are saying about him. He’s a good man, I’ve known him for years.”

Many of the women in the room echoed the sentiment, with some of them going so far as to suggest that the allegations were a “witch-hunt to take a good black man down.”

“Just like Bill Cosby, they are trying to come after Jewell,” one told me as we stood near the bar. “I say no.”

“But Cosby was found guilty. Are you suggesting …”

It was soon time for the group picture — the one where all the women wearing their campaign-ready T-shirts circle around Williams and smile. As his team arranged the scene, I prepared to take a shot myself. Williams stopped everything and yelled at me.

“Don’t take my picture!” he exclaimed. “You don’t have my permission! I will have you kicked out.”

Before I could say anything, two tall men approached me and asked if there was a “problem.” I reiterated that I was a journalist practicing my First Amendment rights. They backed off.

The group photo got taken, though not by me, and it became abundantly clear that my time at the event would soon be coming to an end. 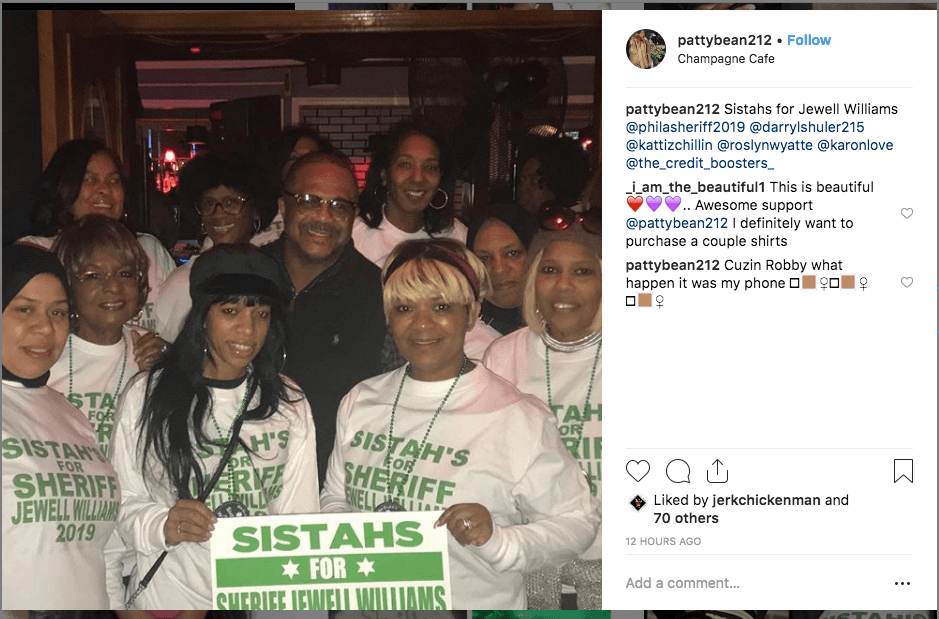 “Someone on Jewell’s team asked me to throw something for him tonight, so I did,” Patty Bean, the host of the event, told me. “I don’t even live in the city, so I couldn’t even vote for him if I wanted to. … I don’t really need the publicity — my ladies nights are always a hit.”

As I tried to get more explanations why any of the women at this event would support a man plagued by multiple sexual harassment allegations, Williams tried to keep them from speaking with me. As a woman would consent to talk to me, he would either whistle or signal her to approach him. He would then whisper a few words in her ear and she would subsequently avoid me altogether. One said flat out: “Jewell told me not to talk to you.” 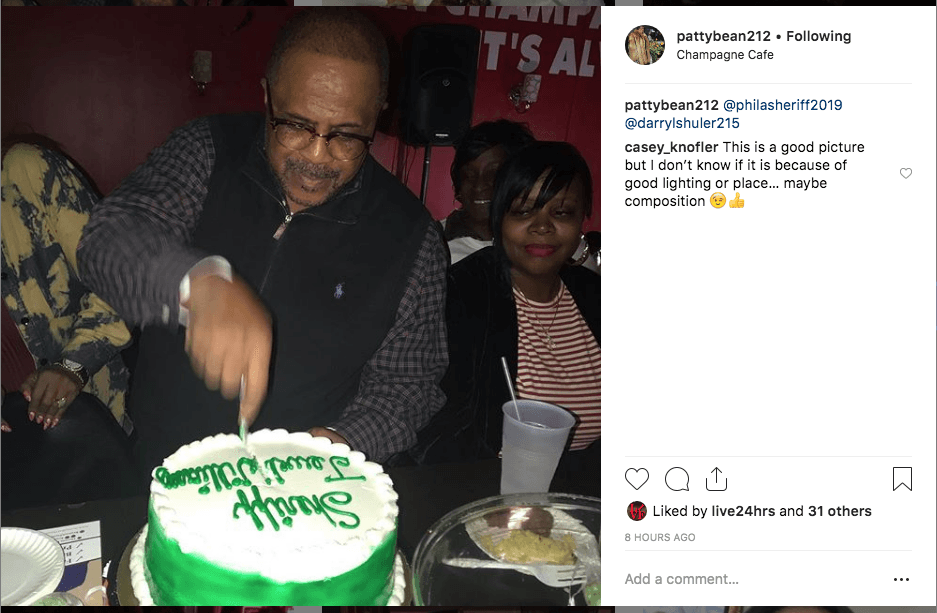 Some began to hide campaign materials from me — and then another candidate appeared.

Former assistant DA Teresa Brunson, who is currently running for judge, said she only came to “mix and mingle” at the event.

“Are you endorsing Jewell?” I inquired.

“I am not endorsing anyone but myself,” she told me, after a pause. “Yes, only myself.”

Once he saw us talking, Williams summoned Brunson, who then, smiling and holding one of the T-shirts, took a photo with him.

While they were occupied I snapped a furtive shot of a campaign sign — and irreversibly hastened my exit. 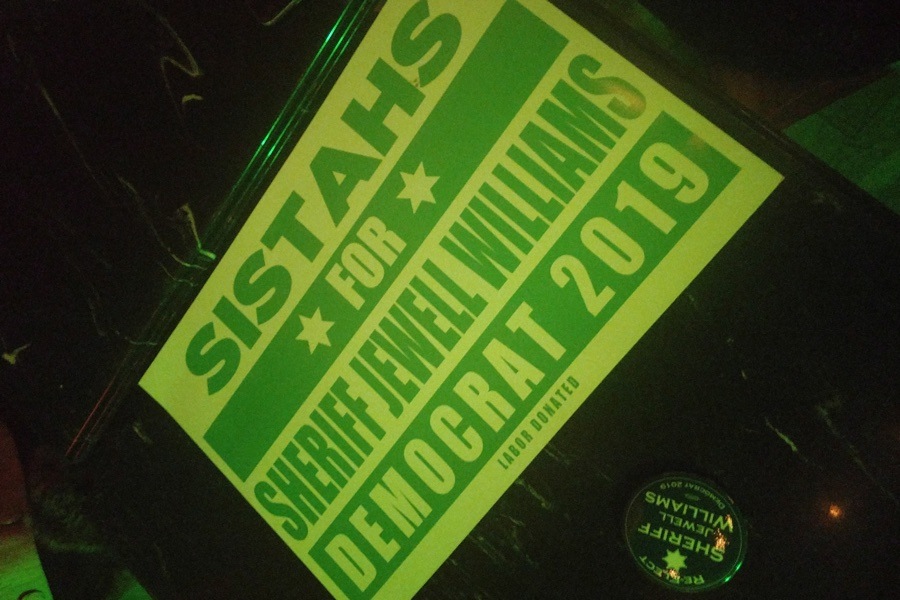 The picture I took before getting kicked out of Jewell Williams’s “Ladies Night.”

Williams saw the flash of my phone and flipped out: “That’s it! I want you to leave now!”

“Who has a public campaign event and tells the press to leave?” I asked.

“I don’t want you here taking photos. That’s against my policy.”

A Champagne Cafe manager came over and told me I had to leave. She escorted me straight out the door while an R. Kelly song played in the background.