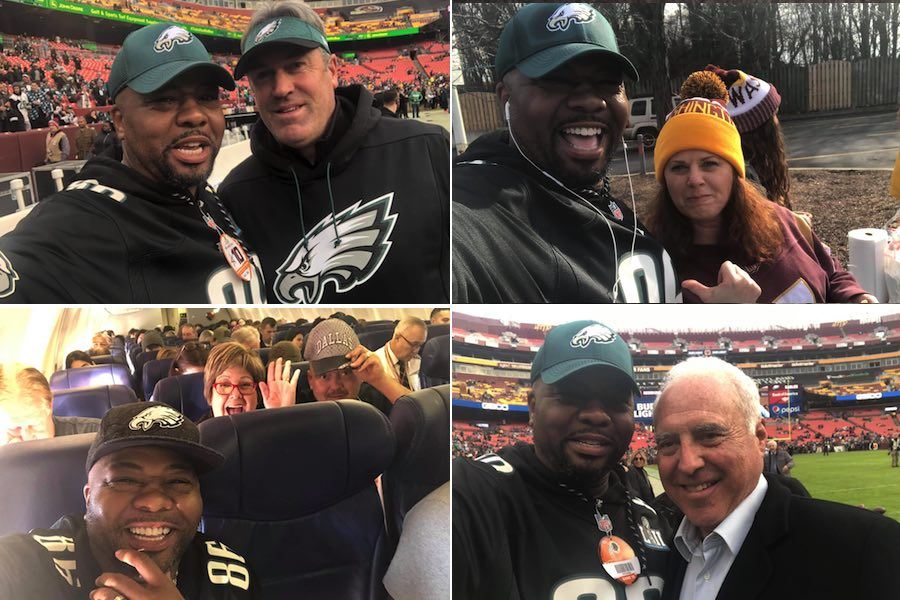 This is a story that might not have had a happy ending. In 2016, Arizona resident Koroun Butler contracted the viral infection myocarditis, which can lead to sudden death. As a result, the Philly native had a stroke, but recovered. Once his doctor gave him a clean bill of health, Butler, who is a huge Eagles fan, decided he needed a bucket list. The first box to check off? Go to every single Eagles game in the 2018–2019 season.

And what a ride it has been.

In London, Butler says, he got to hang out with NFL commissioner Roger Goodell and sports broadcasting veteran Dick Ebersol at a cigar bar. And at an NFL-sponsored event in London, Butler met former Eagles Jon Dorenbos, Brent Celek, and Ron Jaworski.

At last Sunday’s pivotal Eagles-Redskins game, Butler even managed to get onto the field, where he took selfies with Eagles owner Jeffrey Lurie, coach Doug Pederson, and sports radio loudmouth Howard Eskin. 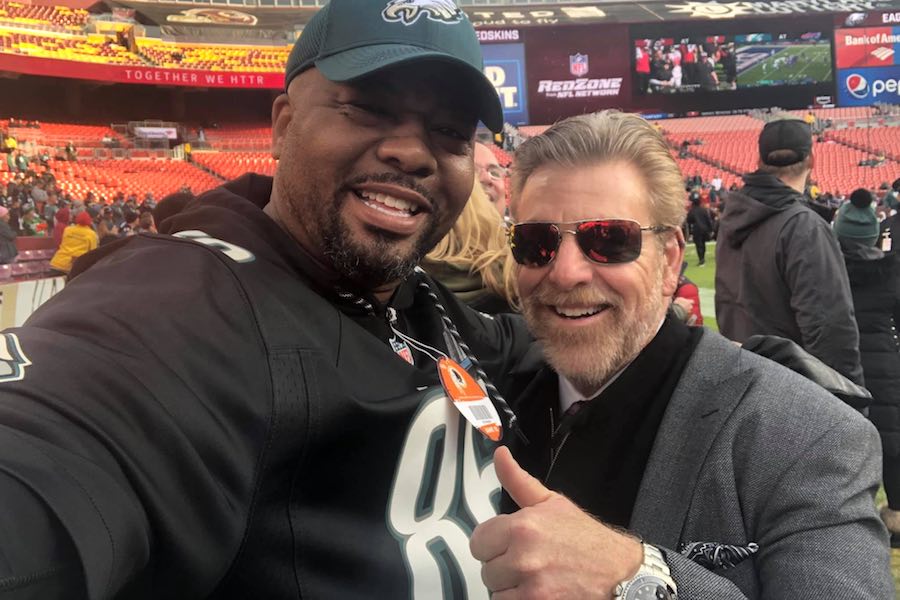 Of course, what the 45-year-old sales trainer and Central grad couldn’t have known two and a half years ago when he managed to sell his wife on the not-exactly-inexpensive idea, was that the Eagles would win a Super Bowl, driving up resale ticket prices significantly. He also couldn’t have known that the Eagles would make it into the playoffs this season, meaning that his original 16-game commitment now has an unknown end date.

“My wife is pretty phenomenal to support all this,” Butler tells Philly Mag. “She’s been somewhat of a single mom for the last four months. I think she was secretly happy when the Eagles weren’t doing so well earlier in the season. She thought this would all be coming to an end. But now? Now I’m off to Chicago this Sunday for the Bears.”

Butler says that he bought almost all of the tickets — average price: $200 — via third-party seller Vivid Seats the day that they became available. He estimates that the tickets cost him 20 to 25 percent more than what he budgeted in 2016 when his plan was hatched. And that’s not counting his travel expenses, which included several nights in London for the Eagles-Jaguars matchup.

There have also been some low points in Butler’s endeavor, such as the Dallas Cowboys game that we should have won.

“We got royally screwed there,” Butler opines. “But Jerry [Jones]’s stadium is the most amazing place to watch a football game.”

Now that the Eagles pulled off yet another miracle, Butler isn’t sure what the future holds. Yes, he’s going to Chicago on Sunday, but if the Eagles win that game and then another and … well, we can’t assume that the Eagles aren’t going to make it to the Super Bowl, which would pretty much destroy any of Butler’s original cost estimates.

“I’m definitely going to Chicago,” he says. “But I need to start thinking about whether I need to save my money for the Super Bowl and miss the other games.”

Only time will tell. But as for the rest of his bucket list, Butler says he wants to take his wife and daughter around the world to places like Australia and South Africa.

“This is all about filling life with experiences and not material things,” he explains. “I’m not sick anymore, but having that scare really put everything in perspective. I want us all to have great memories when it’s all said and done.”