Newlyweds Christina Rosso-Schneider and Alexander Schneider want their passion project, A Novel Idea on Passyunk, to function as an all-encompassing community space. 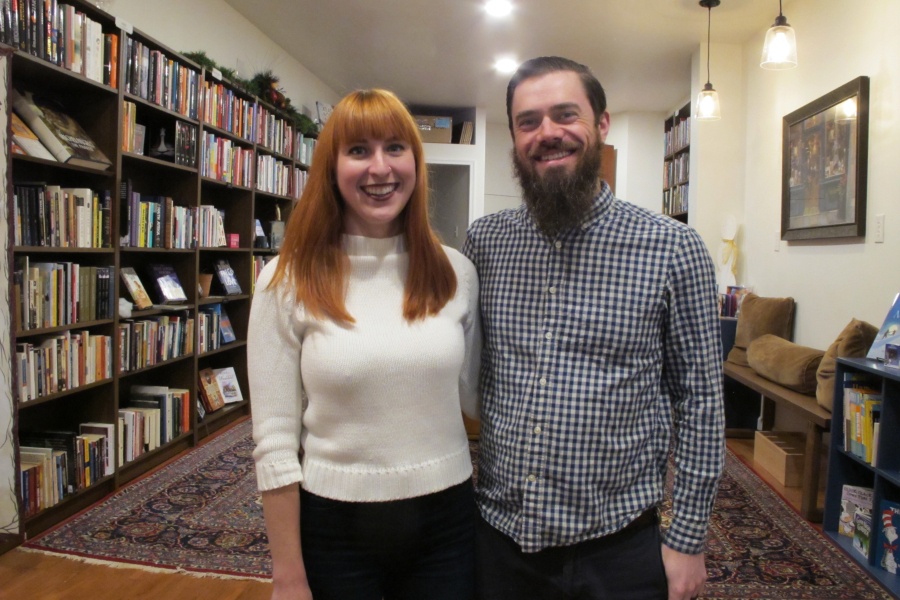 Christina Rosso-Schneider and Alexander Schneider inside A Novel Idea on Passyunk. | Photo by Claire Sasko

It’s a Passyunk love story for the books.

Until a few months ago, now-newlyweds Christina Rosso-Schneider and Alexander Schneider could hardly find time to fit one another in their schedules. Even though both were working multiple jobs (Christina as a professor/writer and Alexander as a graphic designer), they decided to add one more (major) responsibility to their list: opening a bookstore.

Their store, A Novel Idea on Passyunk, carries about 3,000 titles, as well as locally made tote bags, T-shirts, candles, bath and body products, and more. Its launch comes at a time when Philly’s literature scene feels particularly energized, and bookstores with a local emphasis, like the newly opened Shakespeare & Co. in Rittenhouse, are in high demand.

Christina and Alexander saw a jam-packed soft opening event earlier this month. They’ll hold their grand opening party on January 4th. We caught up with the couple to hear about running A Novel Idea and what separates it from other bookstores. 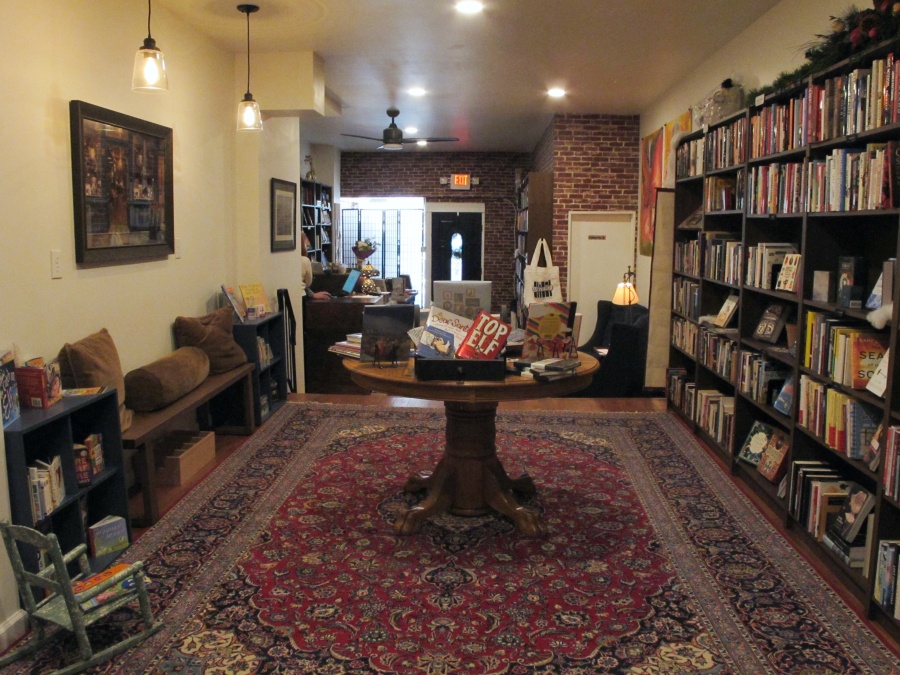 How’d you guys meet?
Christina: We met in 2015 on Tinder. He was my first Tinder date.

Alexander: She was my second.

C: I didn’t think I was going to find my future husband necessarily, but we felt like from the get-go we were on the same page. We talked for a few weeks before we went on a date to Bing Bing Dim Sum, right down the street. Our whole romance and life has to do with East Passyunk.

Where are you both from?
A: I was born in Long Island and moved to the ’burbs — Lower Gwynedd — around seven years old. Then I went to Pitt for two years, came back, and ended up going to UArts. Now we live just a few blocks away. I’ve lived in this neighborhood for 12 or 13 years.

C: I’m from Malvern originally. I lived in Manayunk when we met, then moved to Fishtown, then here. 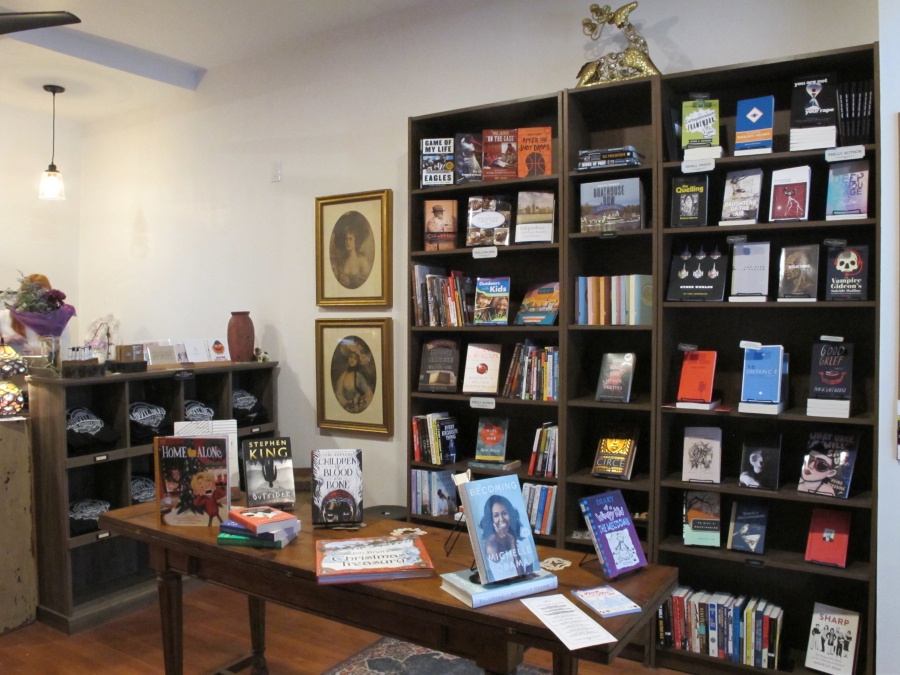 You both work multiple jobs. What do you do, and how do you manage it all with the bookstore?
A: She’s a college professor and writer, and I’m a graphic designer by trade. For the bookstore, we realized that we ourselves could do a lot of the things that we would probably have to outsource or get someone else to do. After a joking conversation about opening one, we both sat with it for a few days and realized that we could actually accomplish it  — and that [Passyunk Avenue] needed a bookstore, because there wasn’t another one for a mile. So we sort of hit the ground running.

C: As someone who’s always been a bookstore-lover and a writer, the idea of opening a bookstore was a fantasy, but never something I thought would become a reality. But neither of us felt like we were exactly where we wanted to be professionally. Between me having three jobs and Alex working several freelance jobs, we were like, ‘We don’t spend any time together!’ That gave us the the idea, because if we’re the two people running it, we have be together.

It seems like a great time to open a bookstore in Philly — the city’s lit scene feels like it’s booming.
C: We feel like we’re creating a community space in the right time. My passion is creative writing, and eventually I want to host writing classes here. I’ve been running an open mic nearby at Lucky 13 Pub for a year and half. There are more events popping up, there are more writers coming out, and in general we have really talented people here, plus a lot of local presses. Even non-writers are starting to be interested in these events — they want to come to a bookstore and have a glass of wine and read. 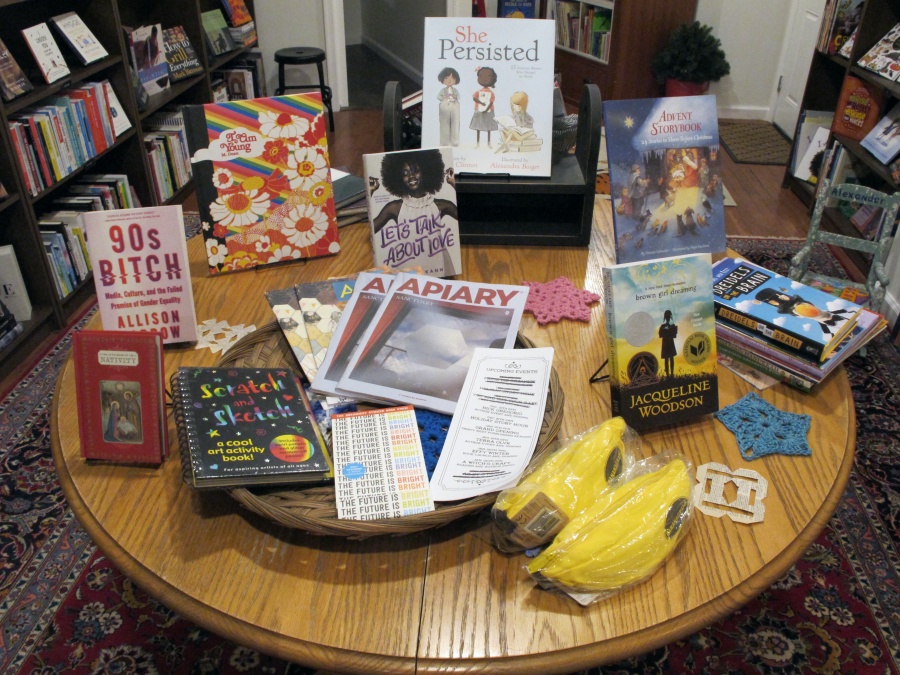 How was the store’s soft opening?
A: Crazy. Anxiety-ridden.

C: The days leading up to it were really nuts. Our books were delivered late. Thankfully, my college friend was in from Maine for the weekend, and she helped people pick out books, and when we had booze she was our bartender. We couldn’t have gotten it done without family and friends. But I didn’t sleep at all. We had a million things to do.

A: We were trying to take moments over two weeks leading up to the opening to enjoy each other and give each other hugs and realize we’ve come a long way. On opening day, we were at the store an hour early, and there was a line out the door before we even opened. As soon as we opened the door, the place was immediately full, and it was more than we could ever hope for.

C: It was amazing to see the outpouring of support we received from people from the neighborhood saying, ‘We’ve wanted a bookstore for so long!’ 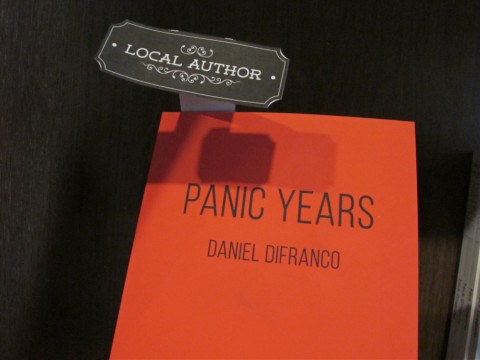 What was your vision for A Novel Idea — how did you want to set it apart from other bookstores?
C: We wanted to start with our selection being more general to begin with so that we could get a feel for what the community wants. We say we’re a community-minded bookstore, so that means supporting not only local businesses and artists but also drawing in members of the community. We offer a local-authors and small-press section, which is in the front space. It features amazing local writers that not everyone might know about. One thing that’s cool to see is when small authors who are on the shelf here visit the store — for example, the editor of Empty Set Press was in the store, and someone bought an Empty Set Press book, and they got to have a conversation.

A: Some of our other items are from artisans in the area — the candles are from Pittsburgh, the T shirts and cards were printed by Top Banana.

C: And Alex designed our logo. We also have murals in the store by Bethanne Frazer. The other thing we hope stands out is our events. Last weekend we had three events, [including] one for a local organic baby food line launch and one for a small press, Rhythm and Bones, which launched its first book, an anthology called You Are Not Your Rape. Come the new year, we are going to have a book club, classes through Blue Stoop, and an open mic, and I want to start a writing group. We also want to do events with other local businesses, like with yoga studios or a wine and cheese tasting with a local wine bar. 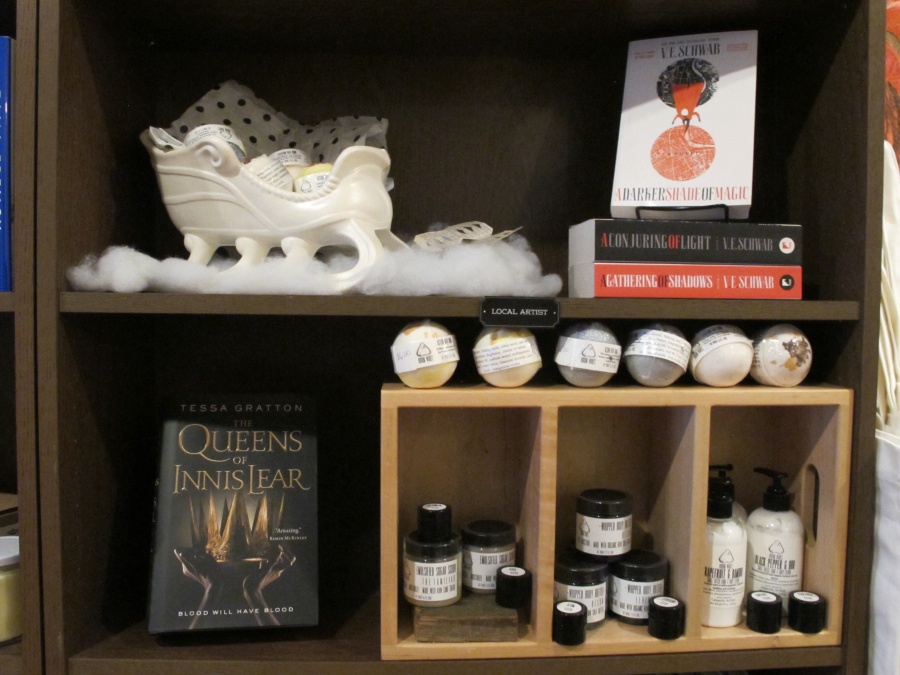 Do you guys have any free time at all?
C: This month has been the only time we’ve had free time. Prior to that, all our free time was spent in here. Last night we actually had date night. We didn’t go far — we went to Le Virtù and got our Christmas tree at Passyunk and Broad. It was a no-phone, no-work-talk dinner.

What kind of books do you carry right now?
A: We have a used section, folklore, gender/feminism/sexuality, arts and crafts, self-help, fiction and new releases, and young adult on the back shelf.

Your grand opening is slated for January 4th. What do you have planned?
C: We’re going to feature Thirty West Publishing House, and they have lined up four different people to read. There will be performances, light refreshments and snacks. 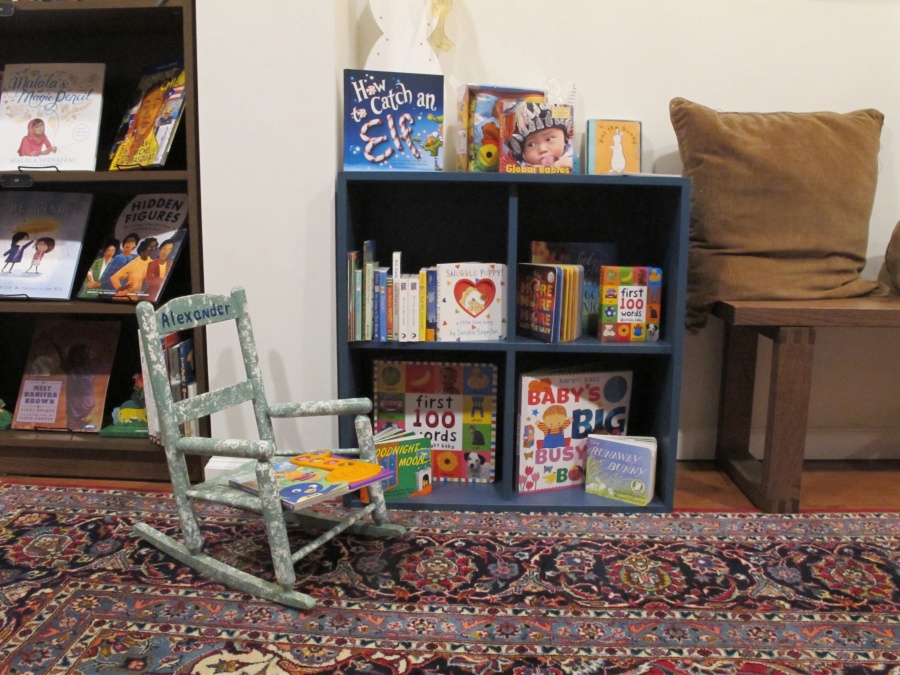