“This Is Us” Is Getting Philly So, So Wrong

The hit NBC TV show’s subplot about a major character running for office in Philadelphia doesn’t make a lick of sense. 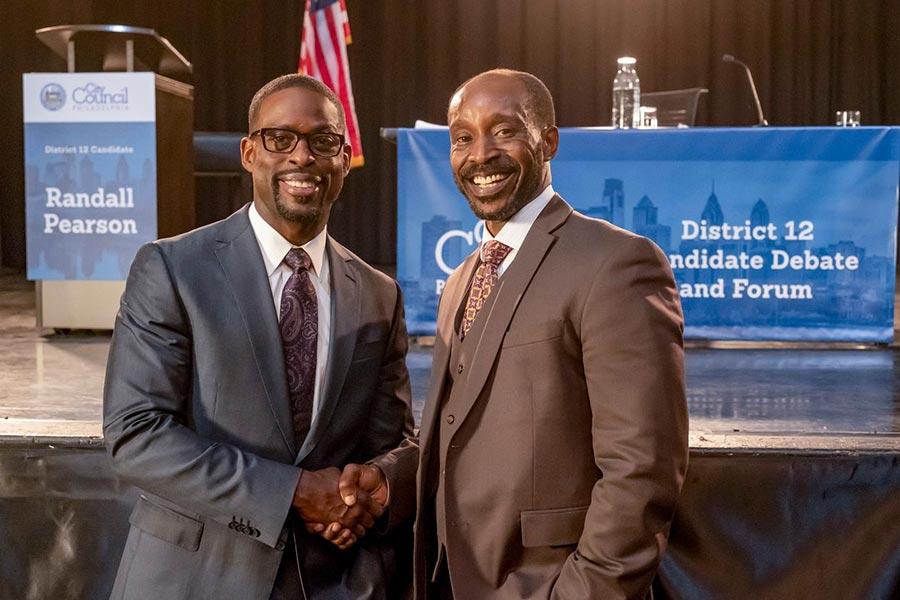 In NBC’s “This Is Us,” Randall (played by Sterling K. Brown, left) is running an ill-conceived (and, in real life, illegal) campaign for City Council against Sol Brown (Rob Morgan).Photo: NBC

Note: This article contains spoilers for recent episodes of This is Us.

At the end of Tuesday’s fall finale episode of the popular NBC drama series This is Us, Randall Pearson (Sterling K. Brown) was told by his wife, Beth (Susan Kelechi Watson), that she was no longer “on board” with his quixotic campaign for a City Council seat in Philadelphia. Randall vowed to remain in the race, a decision that led to his sleeping on the couch that night.

Count me on Team Beth. That’s because the City Council election plotline might be the silliest and least sensical in the show’s history, one that exhibits a notable lack of understanding of city and neighborhood politics in Philadelphia, not to mention election law. I wouldn’t vote for Randall, and I can’t imagine the “12th” City Council District would, either.

The story is that Randall has purchased an apartment building in Philadelphia, the one where his late biological father, William, had lived in the last years of his life. During a visit to the city, Randall decides impulsively to make a run for Philadelphia City Council against an entrenched older incumbent named Sol Brown (Rob Morgan). The show has Randall running in the “12th District” (there are only 10 in Philly), which appears to be somewhere in North Philadelphia, as there are multiple references to Olney Avenue, although the scenes were not filmed locally.

There are, to be charitable, quite a few holes in Randall’s plan. A race for a City Council seat in Philadelphia isn’t something that one suddenly jumps into, especially if that person has never been a politician before. That would be a stretch even if Randall had lived for a long time in that part of Philadelphia — or at the very least a year, which is what city election law requires.

And that’s the problem. Randall does not live in the district, nor in Philadelphia at all, nor has he ever in his life. Sure, he owns an apartment building in the area, but in the show’s timeline, he’s only owned it for a few months. No one in the neighborhood had ever met him or heard of him until very recently. Because if there’s anything voters in Philadelphia neighborhoods look for in political candidates, it’s wealthy, carpet-bagging out-of-town landlords.

But even more of an issue is that Randall lives in New Jersey. And I don’t mean Camden or Cherry Hill — he lives in Alpine, in Bergen County. That’s more than 100 miles from Philly, and much closer to New York than here. As pointed out by the North Jersey Record, the show treats his campaign visits as a short commute, when they would likely take close to two hours in each direction even without traffic.

Randall didn’t even grow up in Philly — he’s a native of Pittsburgh, from a family of diehard Steelers fans. Randall was once shown to have a picture of Steelers great Lynn Swann — who himself ran for governor of Pennsylvania in 2006 — in his office.

In one episode, Randall is shown making little headway with his African-American constituents, so he begins cultivating the area’s Korean-American community, even hiring Jae-won (Tim Jo) as his campaign manager. (Both Randall and Sol Brown are black.) This plot had the potential to explore tensions between those two communities, as seen last year with the bulletproof-glass-ban controversy. But that angle hasn’t been dealt with at all in the last few episodes.

As it stands, why would anyone vote for Randall, especially over an incumbent who doesn’t appear to be corrupt, ineffectual, or in any other way deserving of defeat? How could Randall make the case that he’s well-situated to represent a district — or even a city — in which he’s never lived? How can Randall argue for, say, improved schools, when his own kids go to school a hundred miles away?

It looks like the story will continue in the season’s second half, and for all we know it’ll conclude that running was an overzealous act of hubris on Randall’s part. But more likely he’ll end up pulling an upset victory.

One thing that’s especially sad about this is that, throughout the run of This is Us, Randall has been far and away its best character. A black man adopted as a child by a white family, Randall has spent the show’s three seasons struggling to find his place in the world,across multiple timelines. In a show that’s always been somewhat uneven, Randall and Sterling K. Brown have long been the biggest reason to watch.

Brown, who has also been seen in recent movies like Black Panther, has already won an Emmy and a Golden Globe for his role on This is Us. I would absolutely vote for him for more awards — I just wouldn’t vote for his character for City Council.