We chat with the genderqueer mover and shaker on identity, breaking gender norms, and their incredible new job at Community College of Philadelphia. 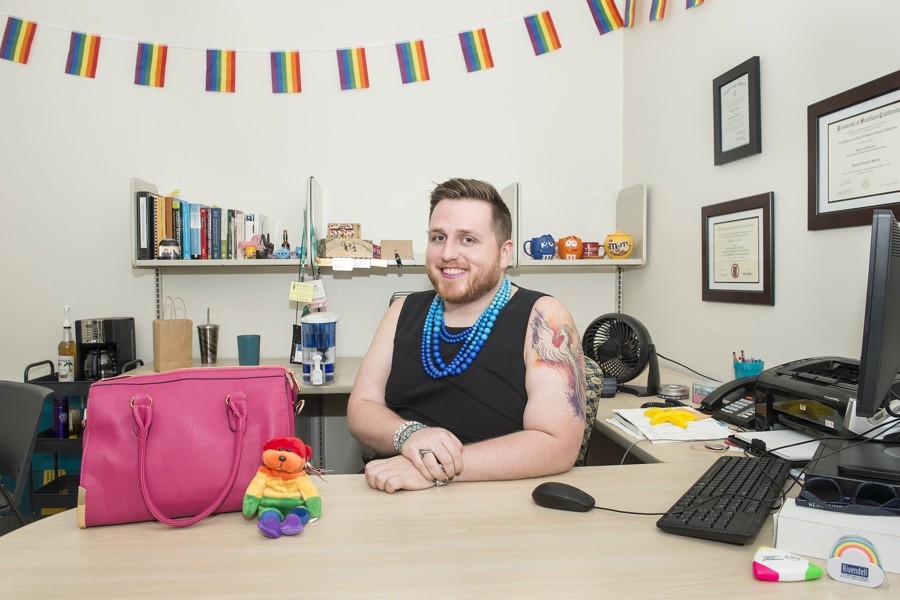 Vincent Scarfo is the inaugural coordinator for Community College of Philadelphia’s brand-new MarcDavid LGBTQ Center. We chat with the genderqueer mover and shaker on their new position, identity, and breaking gender norms within the Gayborhood and beyond.

Tell us a little bit about yourself.
I am a queer and genderqueer performer, producer, organizer, and advocate for the queer community. I moved to Philadelphia in 2015 for a job at Temple University, as coordinator for academic initiatives in Residential Life. However, my real passion was working with LGBTQ students and social justice work. While I was at Temple, I worked on building up my experience working with the LGBTQ community. At the suggestion of a friend, I joined the Welcoming Committee and got involved in the community by planning LGBTQ happy hours and dance parties. I also joined Stonewall Sports and Philadelphia Gay Men’s Chorus to make friends and meet other LGBTQ people in Philadelphia.

About two years ago, along with four friends, we started an organization that would later be known as Qunify. We launched Qunify in July 2017, and have since held 30-plus events and built a community of 1,600-plus people. Through my work with Qunify, I have met so many amazing people who do not feel welcome in the Gayborhood, and I am honored to be a part of creating additional spaces for LGBTQ folks to feel safe, comfortable, and visible. My work within the Queer community in Philadelphia is what allowed me to land a dream job at Community College of Philadelphia, where I opened and developed the curriculum for the new MarcDavid LGBTQ Center.

You’ve recently announced that you now go by they/them pronouns after being out in the community for many years. What inspired the change, and how has it impacted your identity?
In the past two years, friends have noticed that I have been more comfortable with my femme expression through fashion and makeup. I have been painting my toenails for years, but didn’t paint my fingernails because I was afraid of having my femme expression visible to the world. As a cabaret performer, I started wearing lipstick and femme clothes, and eventually discovered a love of floral print dresses. I actually didn’t realize I was genderqueer until about three months ago. I was at the Trans Wellness Conference this August when it really clicked. I was surrounded by trans and nonbinary people, and I just felt like I was seeing myself for the first time. After the conference, I allowed myself to wear femme clothing in my everyday life, and started using my stage persona to really explore gender expression through drag under the stage name Beary Tyler Moore.

What is one major misperception about genderqueer individuals that you wish would go away, and why?
I wish cisgender folks would stop talking about transgender people in terms of medical transition. Trans is an umbrella term that includes a wide variety of people and identities and none of us have the same journey. This misconception was actually a barrier to me accepting my own identity. I thought I wasn’t trans enough, because I don’t plan to take hormones or have surgery, and I didn’t recognize any complicated feelings about my assigned gender. I recognize those complicated feelings now.

After coming out, and living more authentically, I have been able to see so much of my relationship with gender that I previously repressed. I realized that a lot of my dysphoria around gender was hidden by my body image and self-esteem issues as a fat person. Learning to love my body as a fat person actually helped me deal with the complicated feelings about my body as a genderqueer person. As I started using they/them pronouns, I also started to dislike hearing people using he/him based on their perception of my gender. Which actually brings up another major misconception: You can’t tell someone’s gender by looking at them. You don’t really know someone else’s gender or pronouns until they tell you.

You’re the inaugural coordinator of the MarcDavid LGBTQ Center at Community College of Philadelphia. What can the community look forward to in this new endeavor from CCP?
My primary goal for the Center is to put students’ needs first, and make sure that the most marginalized members of our community know that they are welcome here. My first three months at CCP has shown that the LGBTQ students on campus have been in need of this resource. My inbox has been full since the announcement of my hiring went out to the campus community, and students stop by my office every day. Many students who came to my office at the beginning of the semester wanted to utilize the College’s chosen name policy. So my first initiative became streamlining that process, and now students can easily update their student profile online to include a preferred name, even if they haven’t legally changed their name. This preferred name replaces their legal name in many of our systems where a legal name is not required. We are also planning a legal name change clinic in partnership with the Paralegal Studies program and the LGBTQ+ Club, which will provide free and reduced-cost services for LGBTQ folks who wish to legally change their name and gender.

I am very proud of the student leaders who have reactivated the LGBTQ+ Club on campus. The student voice is so important to the success of the Center, and I am so excited to work with a group of passionate student leaders as we collaborate on programs for the CCP community.

We have a midterm election coming in less than a month. What is one thing you would tell the LGBTQ community to get them to hit the polls on November 6th?
Go vote! Pay attention to local politics, and vote in every election, not just national elections. Everything we do is considered political, so we have to pay attention.

I also encourage people to think about the most marginalized members of our community when they vote. Some people are dismissive of the importance of politics and think that it doesn’t matter who is in office, because they don’t like any of the candidates. I even heard someone say that we have survived past administrations, and we will survive this too. Yet, we didn’t all survive. Go vote!