A rush to judgment rarely results in a good judgment. Can we take our time and get this right? 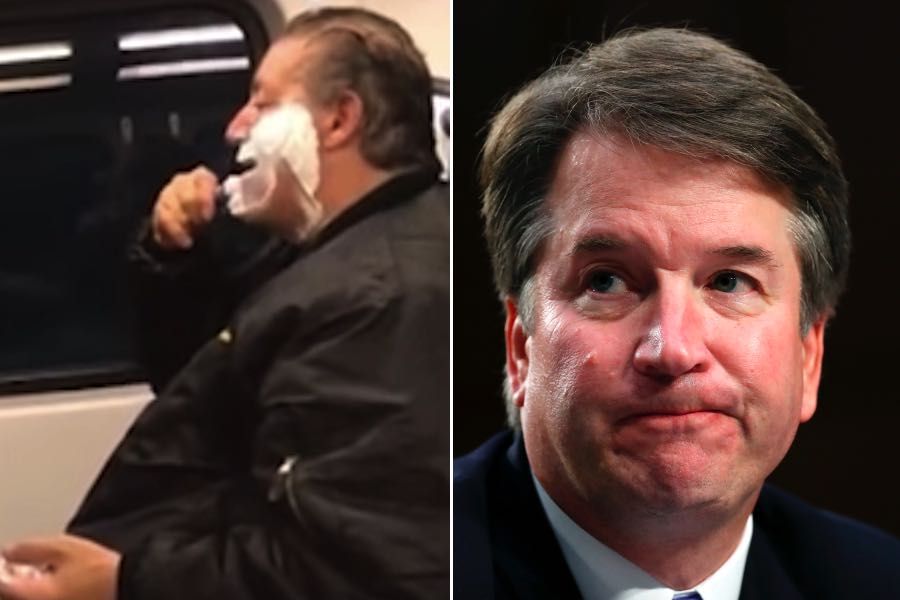 I’ve been thinking about Anthony Torres.

I know, I know; larger news has crowded Torres’s story far off the front pages. But you saw the video, surely, of him slowly, methodically shaving last week on a New Jersey commuter train. He’d lathered up right there in his seat and was flicking shaving cream onto the train floor. The internet unleashed its wrath on him like a hail of bricks: He was an animal, nasty, a slob, disgusting. That was my first reaction, too, when I saw the clip. Who would do that?

I didn’t write anything about him on Twitter or Facebook or Phillymag.com, though. I’m old enough, I guess, to have done some awful, slobby, disgusting things in my own life. Like the time I cracked my infant son’s head against the sink in the bathroom of a bar as I bent down to help his toddler sister Marcy pull down her tights and underpants as we made an emergency pee stop for her in the dead of winter. (I still feel so guilty.) Or the (much later) meeting with Marcy’s therapist at which I called her a “whack job.” Or the too-angry hecklings I bestowed on a long string of soccer and field hockey and football officials for the crappy calls they made in my kids’ games. Thank God Marcy and Jake finished school before social media took over the world.

Mistakes. I’ve made a few. If there’s one thing motherhood will teach you, it’s “Judge not.”

My husband and I have been wrangling for the past few days over whether Brett Kavanaugh’s (possible) high-school piggery should discredit him from becoming a Supreme Court justice. Doug says curtly: Absolutely not. People grow; people change. It simply isn’t fair to judge (hah) someone on what he was like more than three decades ago.

Me? I’m not so sure. Do I think people change? Mm. Kind of. I think, though, that they become more like their inner essence as they age—as time scrapes away civility like barnacles on a rotting ship. I’ve seen it as Doug’s parents have aged, and as my father did. They simply care less. They can’t summon up the energy to bother. They’re focused inward, on their aches and pains. It’s the opposite of high school, really, when all one’s resources are marshalled outward, toward one’s peers—toward the guys you want to respect you at any cost. Or to like you at any cost, if you’re a girl.

It does seem harsh to have an isolated incident from three decades ago bar a man from the highest court in the land. If what happened to Christine Blasey Ford is an isolated incident. If Kavanaugh’s Yale classmate, Deborah Ramirez, isn’t to be believed, or is mistaken. Same with Julie Swetnick. And Kavanaugh’s freshman roommate at Yale. And Mark Judge’s ex-girlfriend. Or if they’re all part of a vast conspiracy to defeat Kavanaugh’s nomination, even at the cost of death threats and having their names dragged through six feet of mud. I mean, someone who believed that would have to give credence to something as absurd as Hillary Clinton running a pedophile ring out of the basement of a pizza—oh, wait. Never mind.

So here’s the thing about Anthony Torres. After he’d been vilified on social media, he came forward to tell his story. He was homeless. One of his brothers gave him money to take a train to stay with another brother. He didn’t have time to shower at the shelter where he was staying, and he wanted to look, he says, “presentable” when he got to his brother’s house, so he shaved on the train. It’s a sad tale, one that should make all of us deeply ashamed for the conclusions we leaped to before we knew what we know now.

We’re all so busy leaping to conclusions. We’re all in such a rush to be catty and cruel and let the snark fly. What’s the big hurry? Why not wait to see what turns up—what the evidence shows?

Take Brett Kavanaugh. Imagine if instead of insisting that Ford’s allegations were enough to derail him, her supporters had sat back and waited to see if other allegations surfaced. What if, instead of trying to ramrod the Kavanaugh nomination through with no questions asked, Republicans on the Senate Judiciary Committee had cooled their jets? Everything we know now likely still would have come out. But the battle lines wouldn’t be drawn so starkly. Emotions wouldn’t run as high. We wouldn’t all look as vindictive and bent on punishment as we do.

It’s a wonder of human technological inventiveness that a guy can take a movie of a man shaving himself on a train, post it online, and have tens of thousands of people view it in a matter of hours. It’s a failure of the human heart, not that so many of us would come to false conclusions about what we’re seeing—that’s in our nature—but that we would stumble over one another and our better angels in our rush to shame and condemn and expose others publicly. Morality plays are every bit as explicit as ever. We’re just too impatient now to stick around for the end.