The West Philly Woman Who Transforms Songs Into Quilts 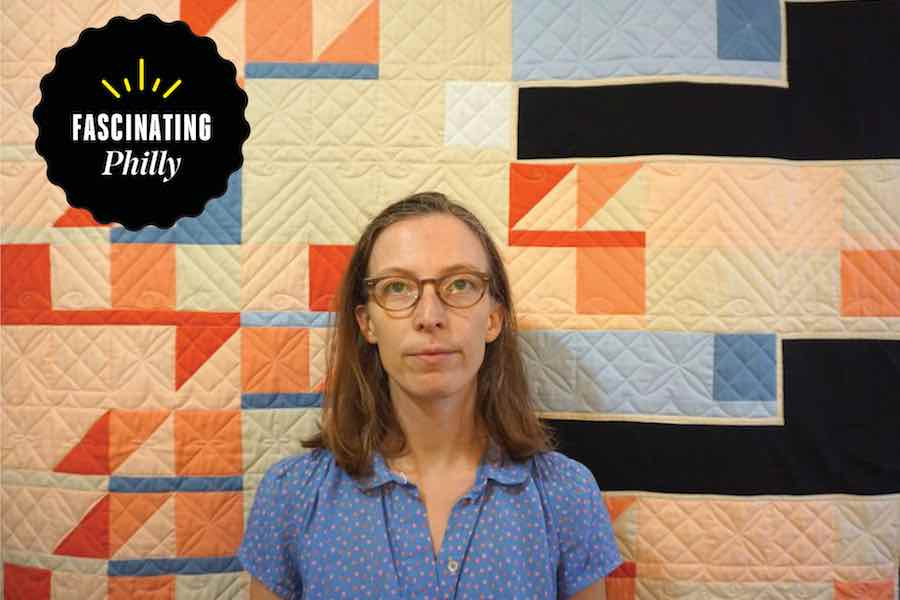 Fascinating Philly: Eliza Hardy Jones with a quilt from her Song Quilts project.

I write about a wide range of things here at Philly Mag, from crime and politics to restaurants and vegan meatball controversies. But I would have bet you $1,000 that I’d never write about quilts — that is until Eliza Hardy Jones emailed me about her Song Quilts project.

In case you don’t know the name Eliza Hardy Jones, you should know she’s a classically-trained musician who lives in West Philly with her husband. Jones, 38, just came back from San Francisco, where she played piano for Grace Potter. Now, she’s getting ready to dart out of town again for Potter’s music festival in Vermont — right before she embarks on a U.S. tour with Iron & Wine.

Somehow, between all that gigging and touring, she finds the time to make quilts. But not just any quilts.

On Thursday, at the Pennsylvania National Quilt Extravaganza — yes, this is a thing — Jones is debuting a series of quilts she made for her Song Quilts project.

Now, originally, when I heard Jones was making quilts out of songs, I assumed this meant she was making quilts that were inspired by certain songs. You know, you spark up some Purple Kush, listen to a track from Pink Floyd’s Dark Side of the Moon over and over again, and you start quilting. Cool. That would have been great.

But it turns out this isn’t what the Song Quilts project is about at all. It’s so much more than that. The quilts are music.

To understand this Song Quilts project a bit better, we need to rewind Jones’ life to her childhood. You see, her fraternal grandmother experienced synesthesia, the phenomenon where a person can perceive music as colors. Her grandmother, who was a musician, developed her own methodology for teaching kids to read and play music by color.

The idea was that a three-year-old might not be able to read standard musical notation or a bunch of letters representing musical notes. But that same three-year-old can identify the color red, and if you teach the child that red is a certain note on the fiddle — grandma taught fiddle — then the child can learn to play that note whenever you present them with the color red.

That’s a simplified version of the methodology, of course, but you get the idea.

Fast forward to the present day, or at least to 2016. Jones had just released a solo album. While she was on tour with Grace Potter full time, Jones got an email from a visual artist in Russia. The Russian artist told her she loved the solo album and that it dovetailed with an upcoming art exhibit she was planning. The woman wanted to know if she could incorporate Jones’ music into that show. Jones said yes, and a transcontinental friendship was born.

Eventually, this all led Jones to connect with the Arctic Art Institute, an arts organization in Arctic Russia that works with the Russian artist in question. They offered Jones a residency there if she could come up with an idea that would tie into Arctic Russian culture. Meanwhile, Jones had been doing a ton of quilting since 2004, and she was looking for a way to blend music and quilting, her two main creative outlets, and, voila — Song Quilts was born.

“I came up with the idea that I would interview women in the United States and Russia about their relationships to music and have them sing me traditional folk music from their youth,” Jones tells me. “Early, early stuff. I’m talking about folk music without authors — not Jim Croce.”

In 2017, Jones traveled around the United States and to the Arctic Russian towns of Arkhangelsk and Murmansk, as one does, and she met with women — mostly elderly women, some as old as 95 — and recorded them singing these songs. She then developed her own methodology for transcribing the melodies of these songs and converting them into quilt pieces.

Pitch gets more complicated, but basically, pitch is represented by color, and Jones also incorporated textile traditions from each region or woman’s cultural history as design elements within each quilt.

The following image will give the musicians among you a better idea of how this works:

And here is one of the quilts and the song on which it is based, which is actually an old recording of Jones’ aunt singing a folk tune. Keep in mind that the quilt only reflects the melody and not the accompaniment:

“Each quilt is an exact transcription of how the woman sang it,” Jones explains. In other words, if you understand the methodology, you can use the quilts — which are beautiful examples of the craft in and of themselves — to recreate the song.

Jones says that her dream is to eventually assemble some of the women and the quilts in a venue where each woman can perform her song next to the quilt representing it.

Meanwhile, you can follow Jones’ Song Quilts project and read about the women and their songs on her brand new website. And you can see the quilts for yourself at the Pennsylvania National Quilt Extravaganza, which runs through Sunday at the Philadelphia Expo Center in Oaks.

If you’re more of a music person than a quilt person, check out the 2016 solo album that started all of this. Because Become by Eliza Hardy Jones is available on iTunes.