My wife and I managed to check out a bit of the FringeArts festival this weekend, and I'd say we made out pretty well. 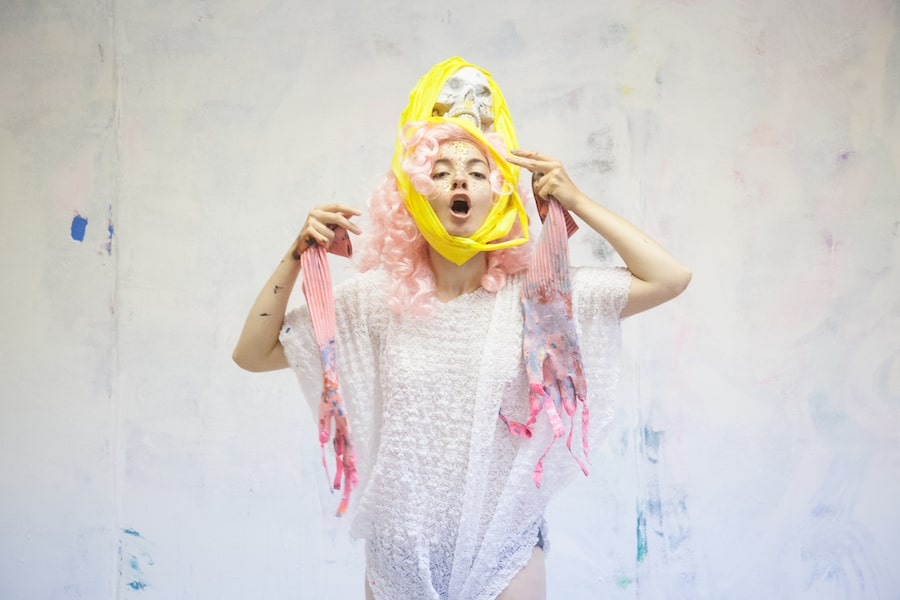 Some years, I wind up not making it out to any FringeArts festival shows, mostly due to my schedule. But this past weekend, after spending most of the week sick in bed, I was stir crazy and ready to get out and see some art. And fortunately, my sister decided she wanted to have the kids for a sleepover — leaving my wife, Suchita, and me to delve into the festival for just a bit.

We kicked things off on Friday night at Bok in South Philly with Feral Wild Girl Child.

Here’s the description from the FringeArts site:

“Before I die, I want to be this wild. A child is hospitalized for three months and allowed to paint on the walls. A room is devoured by paint and glitter, by dance, karaoke, and other ill-advised performance moments, all with the goal of abandon and mortal arrival. Come doctors. Come nurses. Come mothers and doulas.”

Even though we read that, and even though I interviewed the creator of Feral Wild Girl Child, known in the theater community simply as Magda, Suchita and I didn’t really know what we were getting into. I guess you never really do with Fringe shows, right? At least the good ones. That’s part of the fun.

Well, fun might be the wrong word to use in this particular case. I don’t want to give too much away about Feral Wild Girl Child, but Suchita spent a lot of time in a past life (AKA when she was employed and before we had children) dealing with very sick kids at CHOP. She held dying kids there, and on more than one occasion, held a dead child as well. There were visits to the infant morgue.

I was the only one seated in the front row (you basically sit on the floor in a tiny room) for the show, and Suchita was seated behind me. Once the show started, I thought she must be allergic to something in the room — and she does have allergies — because all I heard was sniffling. Once the show was over, I came to realize that she had been bawling her eyes out for the last hour or so, due to the content of the show and her own life experiences.

We’re both still trying to imagine what must be going through a performer’s head in a room like that: You have maybe 10 people squeezed into a claustrophobic box and one of them is having a serious emotional reaction to what you’re doing for the majority of the time you’re doing it.

Suchita and I couldn’t agree more. But, after what she went through during the show, we weren’t really up for another one — especially not what was presumably going to be quiet. We were supposed to go to the Navy Yard to see the “performance without performers,” Stifters Dinge by Heiner Goebbels. But we just couldn’t do it. Heard it was amazing. It’s too bad it only lasted three days.

Instead, we shot over to Bob & Barbara’s for a couple of gin-and-tonics and some pick-me-up music with their live band. Then, our friends picked us up and we all shot over to FringeArts for the Johnny Showcase show, which was as fun a time as always. However, it would be swell if FringeArts could, eventually, figure out how to solve their major problem at the bar — which is that getting a drink can be near impossible at times. I hear a ton of complaints about it. Anyway, after a couple of Narragansett Lagers, we went home. 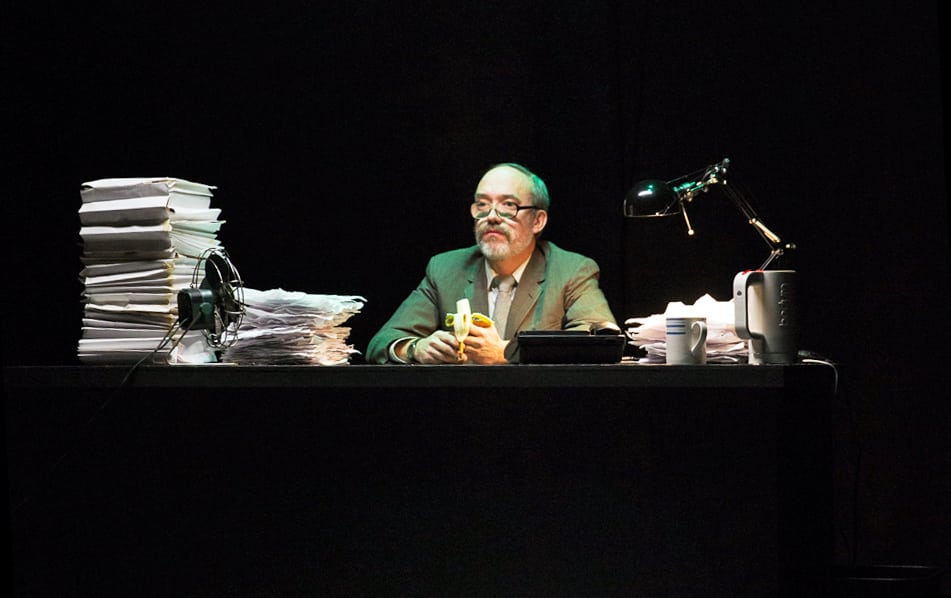 Trey Lyford in The Accountant at FringeArts.

Saturday, we were off to Old City to see Trey Lyford’s latest work, The Accountant, at Christ Church Neighborhood House. Here’s the FringeArts description:

When you take stock, does it all add up?

In the forgotten office of an aging clerk, the tedium of everyday life transforms into a comical and haunting world of futility, remembrance, and regret. The Accountant is a visual theater piece inspired by the disorientation that death can bring into our lives and by Samuel Beckett’s rumination on impermanence, Krapp’s Last Tape.

We wound up running a bit late for The Accountant. Why? Because we started watching the latest season of The Sinner. OMG. Anyway, we needed something to eat, so we shot into Race Street Cafe for a bloody and a sandwich.

In spite of us telling them at the outset that we had a 1 p.m. show at Christ Church, our food showed up so late that we literally had five minutes to eat it. The server was very apologetic and took a drink off the bill. Of course, I would have preferred to have paid double for the drink and enjoyed a leisurely meal.

But back to The Accountant at Christ Church Neighborhood House, where the seats have got to be among the most uncomfortable in the city. (They were also prone to sliding backwards and into these cracks on the risers, which an usher warned us about and actually happened to the woman seated behind us, who fell over. She was uninjured.)

As with Feral Wild Girl Child, we didn’t really know what to expect with The Accountant. We were pleasantly surprised. We had always enjoyed Lyford’s work with Geoff Sobelle in the past, and it was great to see a solo piece from him. Lyford’s daughter is in it as well, in what is a moving, bittersweet scene. (Found the other actor distracting.) If you’re looking for a show to take your kids to that’s definitely not a “children’s show,” I’d put this one high on the list. I really wish I had taken my own. 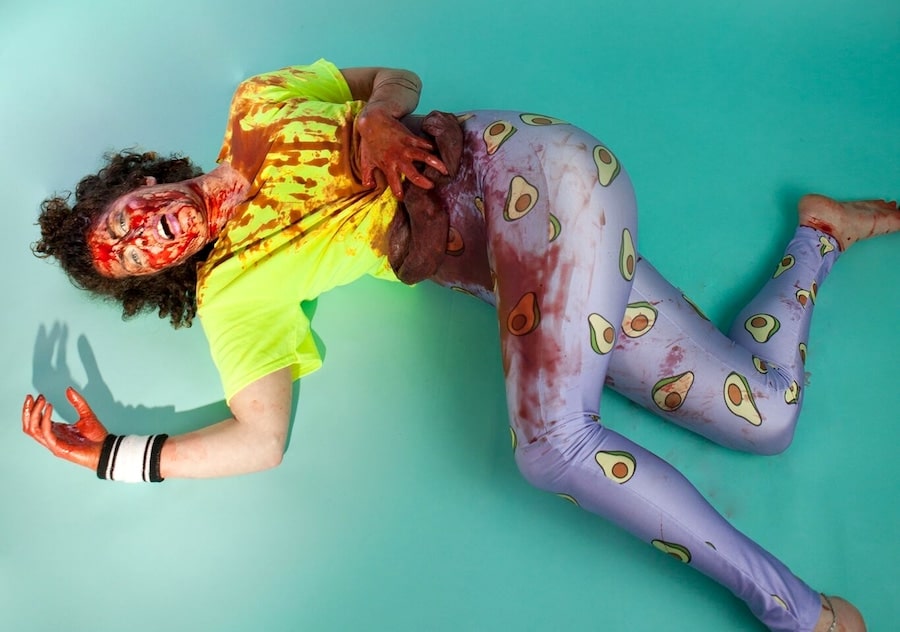 Speaking of kids, we were more than a little surprised to see a kid at Nightmare Fuel, the show from Sarah Knittel that just made the rounds and got a lot of great press at the Edinburgh Fringe.

Nightmare Fuel is an often profane, sometimes scary, quite “adult” show — and yet one couple chose to bring their child, who stared attentively at Knittel throughout the hour-long performance. I’m guessing the baby was about six months old? I’m not sure I’d want my infant having those words and images in his developing head, but hey, whatever works, I guess.

Early in Nightmare Fuel, Knittel leaned over with her eyes closed and lips puckered right in front of my face, so I kissed her. She flinched briefly and then opened her eyes. And I wondered if maybe I had made a grave error at a show that one of my friends described as being “about bad men and bad boyfriends.”

Again, I don’t want to give too much about the show away, but needless to say I made it out alive. So did the rest of the audience inside the “murder warehouse,” as Knittel referred to Panorama Philly, the Kingsessing venue that housed her show.

There’s an important message inside of Nightmare Fuel, and fortunately it is wrapped in a well-produced, thoroughly entertaining wrapper that includes heavy metal, Dana Scully, and spray bottles containing very suspect liquids.

So, Suchita and I made it to three shows this weekend, and we came away with three that we would highly recommend. Not a bad record for the first weekend of Fringe.

Whatever you see, just get out there and see something.