"We are investigating the entire circumstances internally," a police spokesperson told Philly Mag on Monday afternoon. 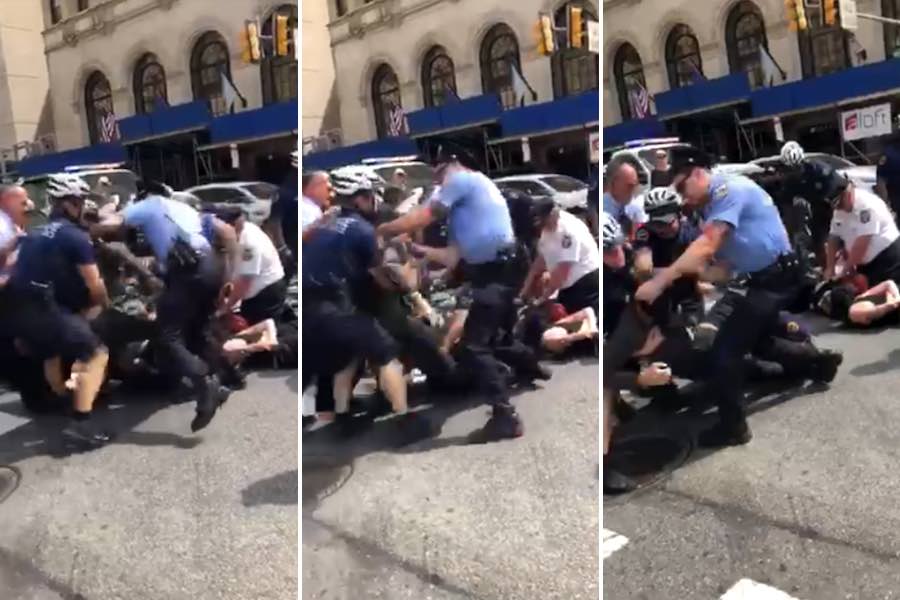 Screenshots from a video that ended with 16 Antifa protesters arrested.

Saturday proved to be a turbulent day in Center City when members of the Philadelphia Police Department clashed with Antifa protesters in a violent incident caught on video. Police say there were 16 Antifa protesters arrested.

A Blue Lives Matter march was being held in Center City on Saturday morning, while an Antifa march was set up as a counter-protest to that pro-police event.

Police reportedly did their best to keep the Antifa protesters away from the Blue Lives Matter group, and police say that the two groups never had a chance to interact.

But around 11:30 on Saturday morning, things took a bad turn. A spokesperson for the Philadelphia Police Department tells Philly Mag there were about 75 “members of Antifa” at Broad and Arch streets. The spokesperson said several of the protesters began fighting with police.

There were numerous videos of the police and Antifa clash posted to social media over the weekend. The below video is a portion of one that shows a Philadelphia cop punching an Antifa protester:

And here is the complete version of that video that was posted on social media. It’s the most dramatic of the footage we’ve seen:

“He was swinging full fists,” says protester Joe Cox, the bike messenger who plans to run for City Council At-Large. Cox says he was standing about 10 feet from the cop who was punching the Antifa protester.

“All we were trying to do was get to the other march,” Cox tells Philly Mag, going on to claim that protesters did not start fighting with the cops, at least not that he saw. “And they wanted to stop us, but all we were doing was walking in the street. We weren’t breaking anything. We weren’t being violent. We weren’t causing some sort of problem, and they just started tackling people.”

Cox says police did not touch or detain him but insists he saw plenty of what he would describe as “police brutality.”

“We are investigating the entire circumstances internally,” a police spokesperson told Philly Mag on Monday afternoon.

In the end, there were 16 Antifa protesters arrested. Nine were issued summary citations for failure to disperse. Seven of the Antifa members arrested were charged with disorderly conduct, a misdemeanor.

[Ed Note: This story has been updated to reflect a comment from the Philadelphia Police Department about the allegations of police brutality.]