The only adult in the MOVE house to survive the infamous bombing and subsequent fire has been diagnosed with lymphoma. 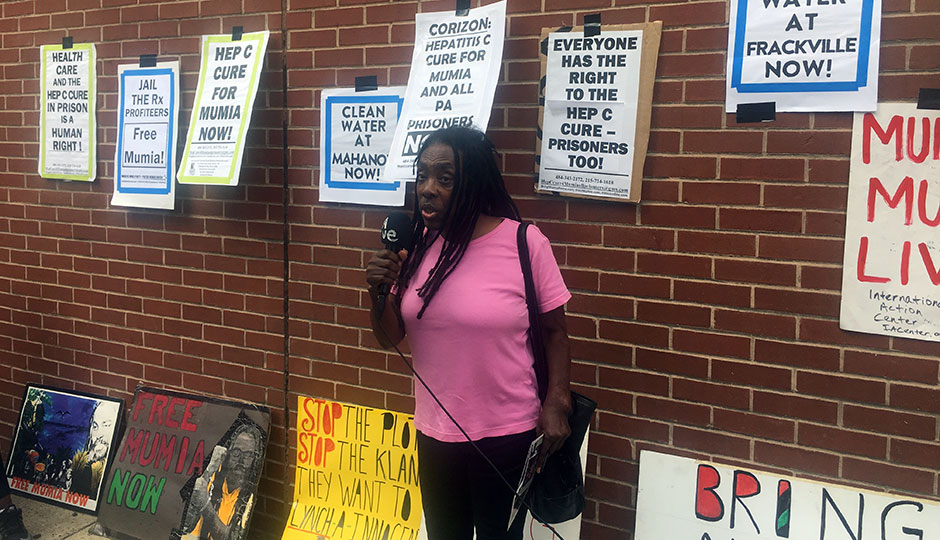 Ramona Africa speaks at a rally in 2016. | Photo: Dan McQuade

At a press conference in West Philly on Wednesday, members of the MOVE Organization announced that Ramona Africa, the last remaining survivor of the infamous 1985 MOVE bombing, has lymphoma.

A GoFundMe campaign to help with Africa’s medical expenses was launched last week, the Inquirer reported, and as of Thursday morning had already raised more $15,500 toward a $40,000 goal.

At the presser, with Free Mumia and Free The Move Nine signs visible beside them, MOVE members said Africa’s cancer was discovered following a stroke which left her temporarily unable to walk. Her insurance company, MOVE spokesperson Sue Africa said, would pay for only 30 days of physical treatment.

In the online description for the fundraising campaign, a member of MOVE termed the 1985 bombing a “holocaust” and said Ramona’s health issues stem from her post traumatic stress disorder. Sue Africa blamed chemicals from the C-4 explosive dropped onto the MOVE compound in 1985, according to the Inquirer.

“Ramona Africa’s health is critical at this point — very critical,” Sue Africa said. “She has cancer, which we are very suspicious of, where it originated from … Because we have had two MOVE members, Merle Africa and Phil Africa — very healthy — die from so-called cancer under very suspicious circumstances.”

Ramona’s illness is “a direct result of the on-going war waged on our Move Family by this government,” the GoFundMe page reads.

Ramona Africa has been hospitalized and needs all of our help. Please do what you can! Her unwellness is a direct result of the on-going war waged on our Move Family! Please donate and share: https://t.co/nEiRq3cYgb

Ramona Africa, 63, was 30 when Philadelphia police dropped a C-4 explosive device from a helicopter onto MOVE’s compound in West Philadelphia, igniting a fire that killed 11 people and burned 65 adjacent homes to the ground. She and 13-year-old Birdie Africa were the only survivors; Birdie Africa died in a drowning accident on a cruise ship in 2013.

MOVE is often referred to as a black liberation or back-to-nature organization. Members adopted the surname of leader John Africa, born Vincent Leaphart. The collective had many encounters with neighbors, who complained of excessive noise and children living in filth, and a combative relationship with city police before the 1985 bombing, including a standoff in 1978 in which an officer was killed.

Ramona, then the minister of communications for the group, fled the house that day and was immediately arrested — the only MOVE member to face charges after the bombing. She served seven years in prison.

The last remaining survivor of the #MOVEBombing is ill and needs help. I’ll tell you what supporters of #RamonaAfrica are asking for and why on @KYWNewsradio pic.twitter.com/Iai190iZFR