The "Fly, Eagles Fly" performance — on the eve of Eagles training camp — might be Kelce's best yet. 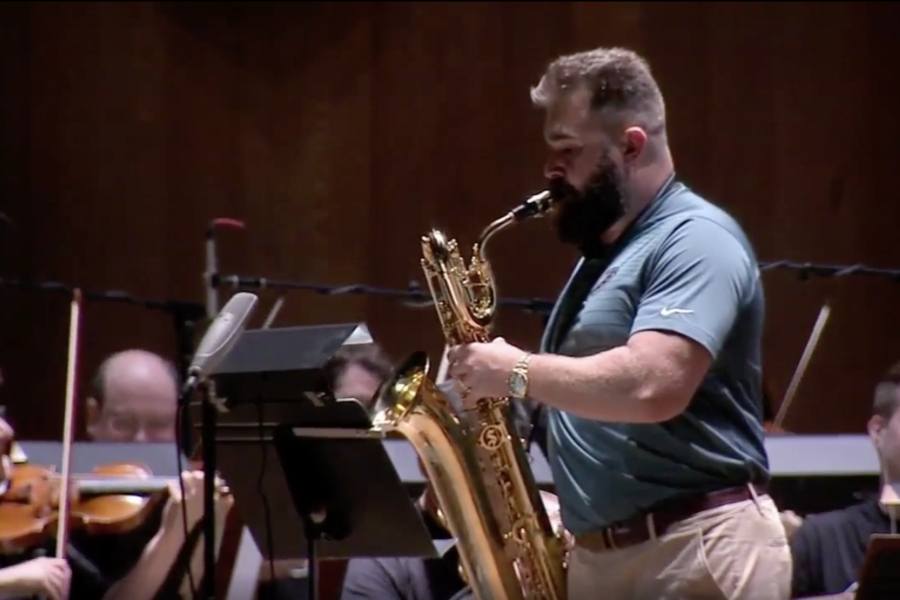 It’s the follow-up performance we’ve all been waiting for.

Ever since our unforgettable Super Bowl parade in February, everyone knows you can always count on Jason Kelce to put on a good show. And this shindig was no exception: On Tuesday night, Kelce showed off his famous baritone sax skills at the Mann Center.

Music to my ears tonight at the @MannCenter w/the @philorch & @JasonKelce on the sax! #FlyEaglesFly pic.twitter.com/LWEQRpR5Bh

Fans and music-lovers, of course, couldn’t get enough. They cheered and sang along as footage from the Super Bowl parade played on a screen behind Kelce. It was another stellar act by Philly’s ultimate hype man.

Kelce gave a little speech before his show, too:

“One of the things that brings me the greatest joy ever since the game, is seeing how the city has been unified — seeing people come up to me and tell me how much they appreciate the fact that we finally got this done for the entire city,” Kelce said on stage. “I can’t help but to sit and notice that this is just another microcosm of how unifying this has been: We have the Philadelphia Orchestra, the epitome of high culture, sophistication, and art, celebrating … grown men beating the crap out of each other. Thank you for letting me be a part of this.”

Merrill Reese, the “Voice of the Eagles” relived the season highlights and emceed the event. The Eagles cheerleaders, Swoop, and Jeffrey Lurie made appearances.

By the way, it’s not the first time Kelce has graced us with his saxophone skills: He marched with the Mummers and played as a member of the Avalon String Band at the annual Mardi Gras parade in Manayunk in late February. Apparently he first became a sax-man extraordinaire in his Ohio high school’s jazz band.

Now it’s back to business for the Eagles center — the team’s training camp begins on Wednesday.

In the meantime, we’ll replay footage from Tuesday’s concert — which looked pretty glorious, if you ask us. Check out some photos and videos below.

Great night at Mann Music Center with a celebration of #Eagles with great work by @NFLFilms and music by world renowned #Philadelphiaorchestra . The night topped off with Eagles center Jason Kelce playing sax with orchestra. @SportsRadioWIP pic.twitter.com/IZ7iaYZJqG

Jason Kelce is IN THE HOUSE at @MannCenter to perform with the @philorch tonight! He’s expected to go on around 9:15pm. pic.twitter.com/jqf1cAKRgb