Mercifully, Britney Spears Did Not Sing a Note at the Borgata Last Night 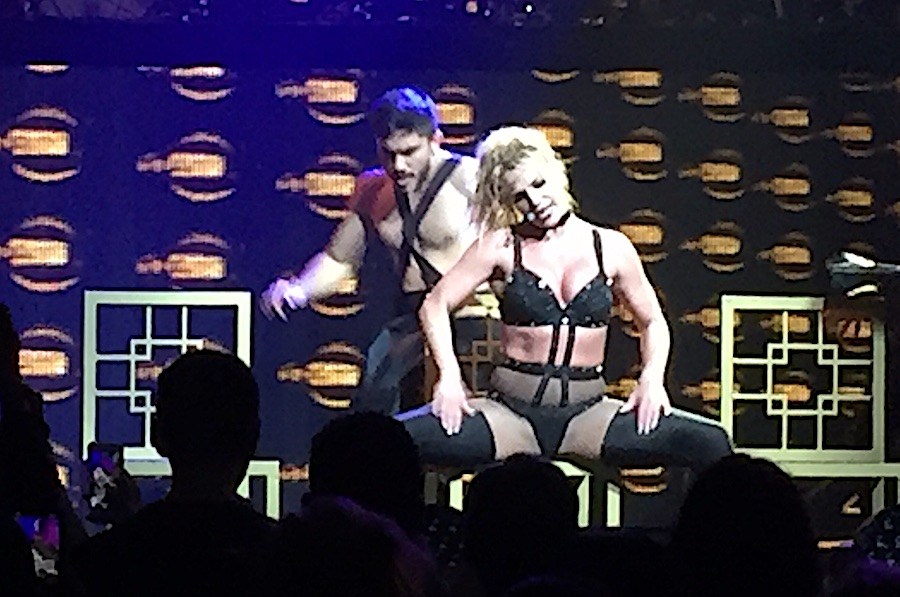 Britney Spears at the Borgata in Atlantic City on Thursday, July 20th.

Twenty-eight years after Milli Vanilli was stripped of its Grammy thanks to the lip-synching scandal heard around the world, Britney Spears lip-synched her way through a 90-minute, non-stop performance at the Borgata in Atlantic City on Thursday night, much to the delight of her fans who sold out the room in record time, paying hundreds of dollars for tickets to witness the spectacle.

I’ve seen acts lip-synch before, and I’ve seen many performers who sing along to their own vocal tracks, giving their aged voices a hand — Barry Manilow was doing exactly that at the Borgata a couple of weeks ago — but never have I seen somebody lip-synch so brazenly as Spears.

She seemed to make little effort to move her mouth in time with the lyrics coming from the massive speaker array in the Borgata’s 2,000-seat Event Center. If you’ve ever seen the hilarious Bad Lip Reading videos on the Internet, it looked a little bit like that.

At one point, I thought Spears was adjusting her headset-style microphone in some display to indicate that she actually was singing, but then I realized, no, her lovely golden locks were simply tangled in it. And we can’t have that.

But once you learn to stop worrying and love the Britney and her lip-synching ways, she and her battalion of dancers and the production team do put on a good show, complete with circus stunts, sadomasochistic routines, and dazzling lasers. Well, at least it’s a good show for the set of people who don’t have a psychotic break every time “Oops!… I Did It Again” rears its head on Tidal.

It’s one big dance party. I didn’t sit down once during the show, and I didn’t see anybody else sitting either, a complete 180 from the Barry Manilow crowd, which kept yelling at my cousin (she’s a crazy Fanilow) to put her butt in her seat.

And, truth be told, as soon as Spears spoke to the audience for a few seconds early in the set — “Are you ready to break the ice, Atlantic City?” she squeaked to introduce the song “Break the Ice” — I realized what a good thing it was that Spears wasn’t singing a note. She has the vocal quality of a chipmunk that’s being shredded on a box grater, and if you told me that she actually never sung a note on any of her albums, I would definitely not place a bet against you.

Really, I’m not exactly sure why Spears herself has to be there. Yes, she’s a pretty talented dancer in her own way, but certainly there are lookalike dancers out there who could lip-synch and dance just as well as she can and who wouldn’t cost $500,000 per show, the amount that Spears is reportedly getting. And then there’s also the hologram concert angle. Not sure why no one has thought of that.

Anyway, Spears has two more shows to go at the Borgata. Tickets will set you back around $300 on StubHub. Definitely a must for any big Spears fan, of which the Philadelphia market has more than a few. For the rest of us, probably more enjoyable to binge watch The Swan while drinking Zima.