Mayor Kenney: “First of All, I Love Jay-Z”

If Jay-Z put us on blast, we'd probably declare our love for him to the public, too. 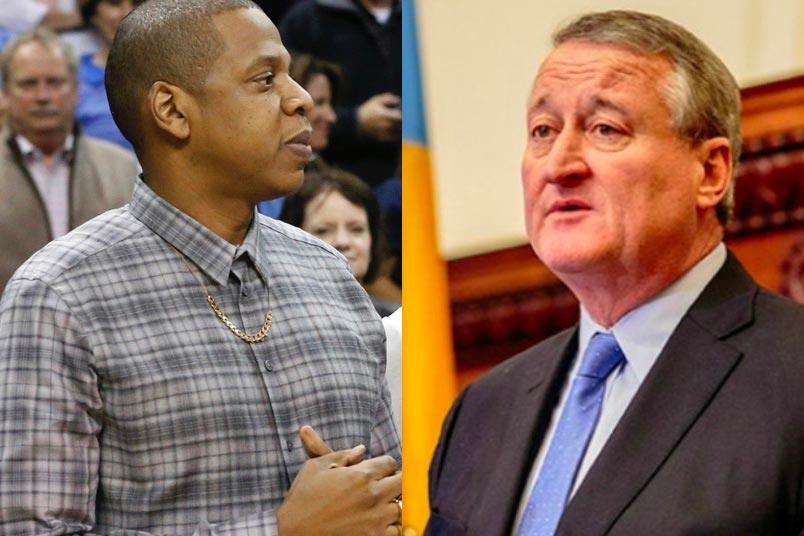 After Billy Penn first reported on Tuesday that Jay-Z’s annual Made in America festival would no longer set up shop on the Benjamin Franklin Parkway following this year’s celebration, a strange string of events followed.

But first, a refresher on the city’s reasoning: The event costs a lot. Like, $1.1 million a lot. That’s for police overtime and post-show clean-up, as well as EMS support and everything else that goes into keeping a behemoth gathering of people flowing smoothly. Roc Nation only reimbursed $600,000 of that last year, though were expected to throw in another $80,000 this time around.

The festival, which has been around since 2012 and, until now, sponsored mainly by Budweiser, is apparently no longer a vital part of the city’s tourism draw. “The need for an event of this scale at this location may no longer be necessary,” the city told Billy Penn. Kenney said “operational difficulties,” such as the length of time to set-up and take down the event, contributed to their decision.

And this is where things get … strange. Because now, Jay-Z is apparently a freelancer for the city’s paper of record, penning an op-ed for the Inquirer where the emcee took aim squarely at Mayor Jim Kenney.

“We are disappointed that the mayor of the city of Philadelphia would evict us from the heart of the city, through a media outlet, without a sit-down meeting, notice, dialogue, or proper communication,” Jay-Z wrote. “It signifies zero appreciation for what Made in America has built alongside the phenomenal citizens of this city. In fact, this administration immediately greeted us with a legal letter trying to stop the 2018 event.”

Jay-Z’s article makes it clear he feels cast out, expounding on the festival’s status as one of the only minority-owned festivals, and the employment opportunities and philanthropic contributions the event has made.

“How does an administration merely discard an event that generates millions in income and employs the city’s people as if we are disposable now that we have served our purpose?”

Then Mayor Kenney, at a news conference, delivered a hilariously simple and earnest response.

“First of all, I love Jay-Z,” Kenney said. “We love the concert and we want to keep it.”

Kenney dubbed the back-and-forth an “unfortunate misunderstanding,” and said the city is looking for alternative sites.