The Philadelphia Police Department is trying to identify the woman seen in the video, which we have published here. 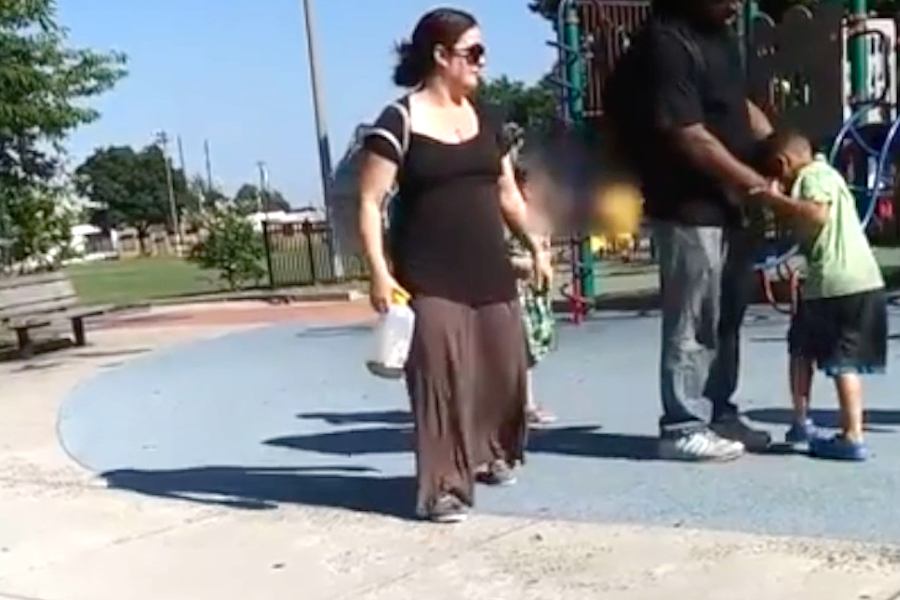 Screenshot of the video released by the Philadelphia Police Department of a woman kicking a child at a park in Northeast Philadelphia.

Last Friday, the Philadelphia Police Department released a shocking video of a woman kicking a child at a park in Northeast Philadelphia, and YouTube deleted the video.

“This video has been removed for violating YouTube’s policy on harmful or dangerous content,” reads an explanation on the YouTube link where the video was originally published. On Monday, police republished the video on a new link, which was still up as of press time.

Police released the video to the public in an effort to identify the adults seen in it. Below is the video in question.

The incident occurred on July 9th at a park near the intersection of Frankford and Cottman avenues. As you can see in the video, a young boy kicks a young girl as an adult male and female stand with them. The man intervenes, calmly attempting to separate the two children. “No kicking,” he says. “No kicking, y’all.”

The woman in the video is much less reserved. After the boy kicks the girl again, the woman kicks the boy — and hard. Then she kicks him hard again.

“You wanna kick?” she asks. “How you feel? You’re kicking her in the stomach. I’m going to kick you in your fucking nuts. You ain’t going to be able to have kids.”

The Philadelphia Police Department describes the incident as “suspected abuse,” and they would like to talk to the two adults involved. But four days after the video was originally released, investigators still haven’t been able to determine their identities.

Anybody with information is asked to call Special Victims Unit at 215-685-3260. Confidential tips can also be made using the Philadelphia Police Department’s tip line at 215-686-TIPS or via text to 773847 (PPDTIP).