The company put up signs encouraging customers not to park in the busy bike lane outside their Graduate Hospital location — but cyclists say they still want to see more of a response from the store. 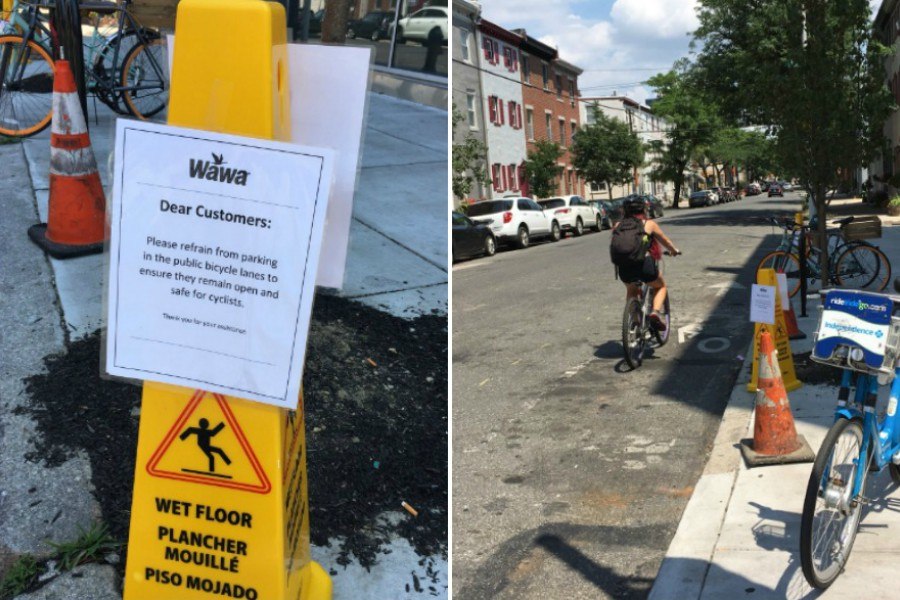 Photos via the Bicycle Coalition of Greater Philadelphia

On Tuesday, cyclists lined up along the 22nd Street bike lane in Graduate Hospital to call for increased safety measures along the route, which included asking the Wawa at 22nd and South to stop allowing customers and delivery trucks to park in the bike lane.

The company responded to cyclists later that day, in the form of a statement. A Wawa spokesperson said the company is “committed to doing everything we can to ensure our delivery vendors are following proper process to avoid impacting the bike lanes in front of our store” and “open to accommodating signage to help ensure everyone complies with parking regulations.”

It looks like the company made a start on Thursday, when cyclists noticed fresh signs outside the location.

Demonstrators were heard. (Taken at Wawa a few minutes ago.) Sign the petition here: https://t.co/mTirbyFitV pic.twitter.com/SHdMtFHr8m

The signs read: “Dear customers: Please refrain from parking in the public bicycle lanes to ensure they remain open and safe for cyclists. Thank you for your assistance.”

James Gitto, who organized the human bike lane protest on Tuesday, said that overall he’s “happy to hear that Wawa did put up signs and is encouraging their customers to do the right thing.”

But both he and Randy LoBasso, communications director for the Bicycle Coalition of Greater Philadelphia, say they want to see more from the company. They say they haven’t seen or heard of any delivery trucks parking in the bike lane since Wawa put the signs up, but they and other bicyclists have noticed plenty of cars parking there anyway.

“We definitely appreciate that Wawa has [put up signs], and it’s also evidence that pressure is being felt by the business, which is good,” LoBasso said. “We’re being heard. But I would say that this is definitely not enough.”

The Bicycle Coalition is calling for the Philadelphia Parking Authority to more closely monitor the intersection and ticket cars that park in the bike lane.

“Wawa is responsible for this, but they’re not the only actor here,” LoBasso said. “We need the Philadelphia Parking Authority to let delivery trucks or customers know that you can’t just pull up [in the bike lane] for five minutes and run in and get your hoagie or whatever … that’s not how bike lanes work.”

Plus, the coalition wants Wawa and Starbucks — which is located across the street — to apply for loading zones on the west side of 22nd Street so that trucks won’t interfere with the lane. In a statement, a Wawa spoke person said the company has applied for and received a permit for a loading zone nearby on South Street and expects “our delivery vendors to comply with the process.”

More than 430 people have signed a Bicycle Coalition petition with three requests: for the city to create a loading zone on 22nd Street, for the PPA to “better enforce” the corridor, and for Wawa to “protect the lane with plastic bollards, signage, and direct customers out of the bike lane and into a legal parking spot.”