The New Philadelphia Board of Education Holds First Public Meeting 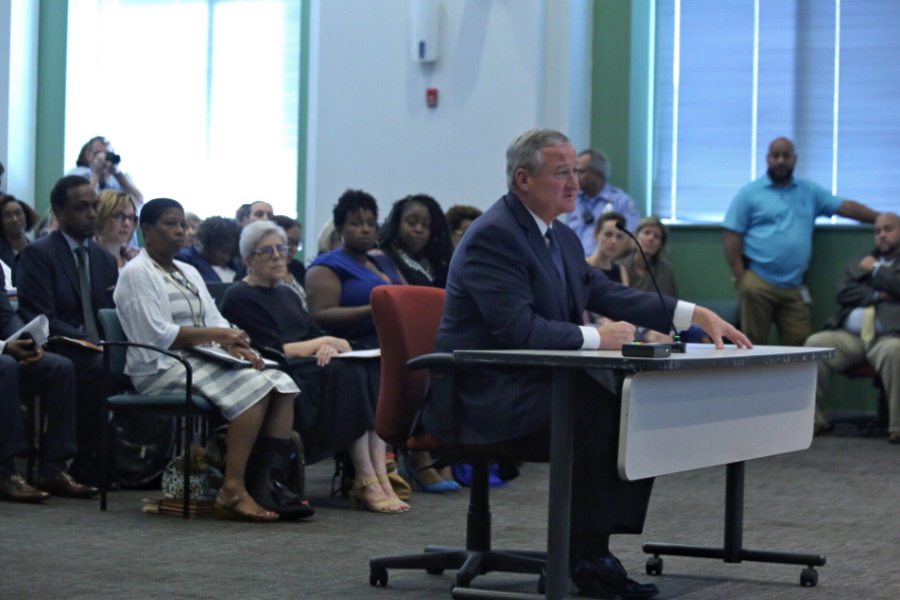 The Philadelphia Board of Education is officially in business.

The board held its first public meeting on Monday evening, roughly three months after its nine members were appointed by Mayor Jim Kenney. The board, which will oversee the School District of Philadelphia and its $3 billion budget, elected Joyce Wilkerson as president and Wayne Walker as vice president.

Wilkerson’s name probably sounds familiar: She’s a former chair of the state-run (and highly controversial) School Reform Commission, which was created to serve as the governing board of the Philadelphia School District in 2001 — and did so until this month, following the commission’s decision in November to disband itself. The new Board of Education will return Philly schools to local control, and Wilkerson, with the most related experience of each of the new members, pledged to “commit to continuing to listen and learn and put in place the governance reforms that we desperately need.”

Walker is the founder and president of international business consulting firm Nell Partners Inc. and former senior counsel in the securities and bankruptcy group at DuPont in Wilmington. He was elected vice president over Julia Danzy, who’s worked in social services for more than three decades (including for the city under former Mayor John F. Street), in a 5-4 vote, according to Philly.com.

Walker said in a statement that the opportunity to serve as vice president is a “privilege.”

“Two things I know — the power of education and the importance of people helping others,” Walker said. “I want to help others access these two essential keys that unlock the doors of opportunity. And I will use every bit of my 30 years of nonprofit and corporate governance experience to make this happen.”

Mayor Kenney and several education advocates, including some who had protested the SRC, were in attendance. They offered words of encouragement — and caution — for the board, which faces no easy journey overseeing the cash-strapped school district.

Lee Huang proves he knows what @PHLschoolboard is about to embark upon: “Pray for us, root for us, yell at us.” #PHLed

“Tonight’s School Board meeting established a strong foundation for the work ahead,” Kenney said of the meeting. “I congratulate Board President Joyce Wilkerson and Vice President Wayne Walker on their new roles, and thank all Board members for the hard work that led to a smooth transition in governance.”

The Board also proposed a four-committee structure to organize its governing responsibilities. Those areas of focus are:

All future committee meetings will be open to the public and advertised on the Board’s web page in advance. Wilkerson will appoint specific committee members later this month.

The board is currently accepting applications for a non-voting student representative position. Rising 11th and 12th graders are encouraged to apply by August 13th.

— Philadelphia Board of Education (@PHLschoolboard) July 10, 2018