From Sex Offender to CEO of Recovery Homes for Women

Meet Dan Feola, who founded two residential centers less than a year after pleading guilty in a child molestation case. 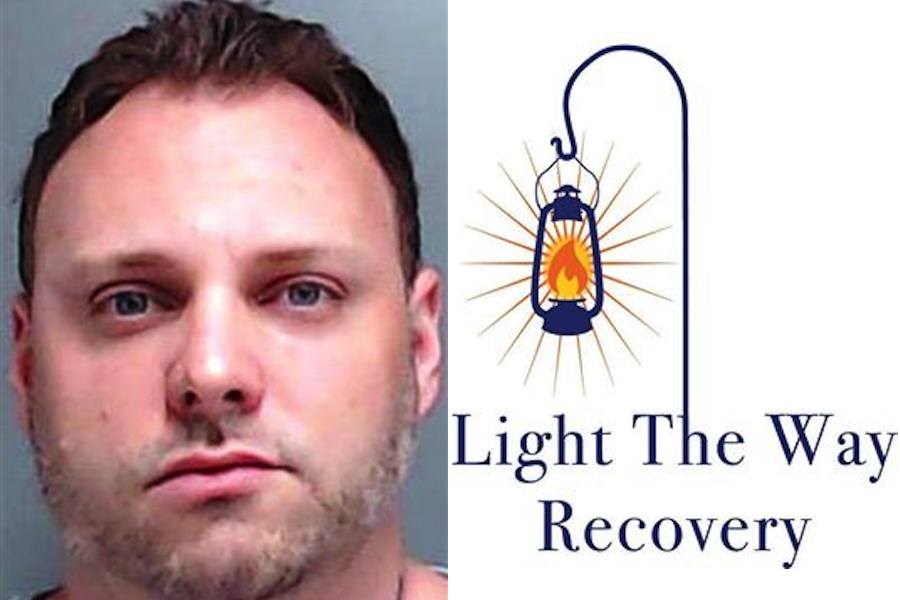 Left: Dan Feola in a May 2018 photo taken by Pennsylvania State Police for the Megan’s Law sex offender registry. Right: The logo for his company, Light the Way Recovery.

People in recovery for opioid addiction are among the most vulnerable members of society. So when they check into a recovery home, sometimes sent there by the court system, surely the people who own and operate those homes are thoroughly vetted by the government, right? Nope. In fact, in Pennsylvania they’re not vetted at all. That’s how convicted sex offender Dan Feola managed to open his own recovery home for women. Two of them.

Feola is the owner of Light the Way Recovery, a company that operates two recovery homes exclusively for women in Pottstown. According to documents filed with Pennsylvania’s Department of State, Feola formed the corporation in February 2017, less than one year after he pleaded guilty in a child molestation case. Nobody is saying that Feola has engaged in any misconduct at the recovery homes, where residents are allowed visitors, including children. But some are wondering why a guy like that would be allowed to open a place like this.

The 37-year-old Royersford resident was arrested in October 2014 after a nine-year-old girl told investigators that Feola had molested her during a sleepover with Feola’s daughter at his house, according to a criminal complaint filed in that case. According to that same complaint, another girl told police about a similar incident at a sleepover a few years earlier.

Interviewed on Tuesday morning, Feola told Philly Mag that he doesn’t recall the incident with the nine-year-old, because he was intoxicated at the time, and he flat out denies that anything happened with the other girl. He claims that he’s been sober since July 2016.

In May 2016, however, less than one year before he opened Light the Way, Feola pleaded guilty to corruption of minors and indecent assault and wound up serving several months in jail. Feola is now a registered sex offender, prohibited from having any contact with children under the age of 12.

Philly Mag talked to three women who say that they were residents of Light the Way in the last year, and they all say that nobody disclosed to them what Feola had done. (We agreed to withhold their names to protect their privacy.)

“I would never have chosen that place if I knew what Dan did,” one of those women said.

According to the woman, it was Alicia Ward, the executive director of Light the Way, who was the primary presence in the home, but the woman insists that Feola was there frequently as well. All of the women we spoke with say that Feola was at the house regularly.

“I don’t know who that person is,” Ward told us when we asked her about Dan Feola. When we pointed out to her that he’s the registered owner of the company, that he owns one of the buildings, that former residents told us that he was involved with the company, and that a background check suggested that she lives or lived at Feola’s home in Royersford, she amended her statement to say that he’s not “affiliated with” Light the Way. She hung up on us soon thereafter. 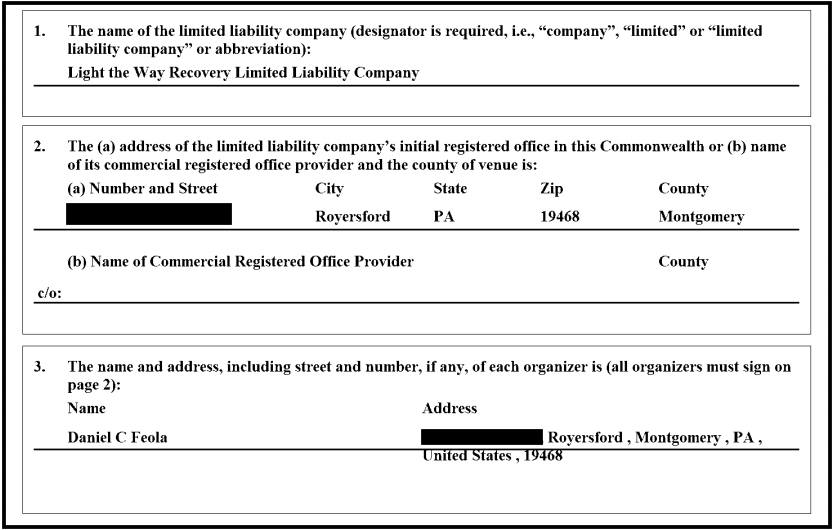 Dan Feola’s name is the only name that appears on the corporate form filed with the state when he registered Light the Way in 2017, less than a year after he pleaded guilty in a sex abuse case. (Pennsylvania Department of State file)

As of last weekend, Light the Way’s website described Feola as the co-founder and CEO of the company, and he is the only person listed on the incorporation documents filed with the state in 2017, according to a report that the state provided to Philly Mag last week.

“His goal is to create a thriving recovery community that can continue to save lives,” read Feola’s online bio on the site. (After we spoke with Ward on Monday morning, the bio was gone.) “At Light the Way, Dan is responsible for most of the back-office functions and for driving overall strategy and direction for LTW.”

Feola explains that Light the Way is really Ward’s endeavor. In recovery herself, Ward wanted to find a way to help other women in the same position, he says, and so he bankrolled Light the Way. He says he used to be more involved but that he’s now transitioned to more of an advisory role.

In any event, business seems to be good: Feola owns his home in Royersford and one of the two properties housing Light the Way residents, and according to information provided in the Megan’s Law registry, he has two BMWs — one SUV and a luxury sports car. Still, Feola claims that he loses more money on Light the Way than he makes.

“This is not a profitable business,” he tells us.

Later in our interview, Feola says that he hopes that our story doesn’t result in his residents being put out on the street, should Light the Way have to close down.

“I can understand the public’s perception of people on the registry,” he acknowledges. “My offense is in my past, and it was definitely fueled by the abuse of substances. Light the Way is part of my redemption story: giving back and trying to help. And we’re talking about an offense that happened quite a few years ago.”

But the fact that the offense occurred in 2014 doesn’t give much solace to the women we spoke with.

“I was mortified,” says a mother of three girls who was a resident at Light the Way for a week and a half in the past few months. “And as soon as I found out, I left immediately.”

“He was around a lot,” says one of the other women we spoke with. “And on weekends, the women with kids would have their kids over … I remember him being there once when the kids were there.”

She doesn’t recall Feola having any contact with the kids. And she doesn’t allege that Feola did anything illegal or improper while he was at the house — none of the women do. She just doesn’t think that a person like Feola should be able to open recovery homes without any kind of background checks, certifications, or state or local approvals.

But in Pennsylvania, if you want to open a recovery home, you can just do it. Anybody can. Whether you’re an ax murder, child molester, or drug dealer. And the courts will happily refer clients to your recovery home without a care in the world for who you are.

“There are a lot of seedy people that open recovery houses,” says Valerie Schina, a Philadelphia-area clinical psychologist who specializes in addiction recovery. “I can convert my house into a recovery house tomorrow and not tell anyone. You can be anybody. It’s scary.”

In December, Pennsylvania Gov. Tom Wolf signed new legislation that will begin to regulate the recovery home industry in Pennsylvania starting in 2020. Recovery homes that receive state funding will need to be certified, but the new regulations will do nothing to prevent the operation of recovery homes outside of that network, so-called rogue recovery homes.

“What’s happening is that in a lot of these cases, family members are trying to keep loved ones clean and sober,” says Jen Smith, Governor Wolf’s head of the Department of Drug and Alcohol Programs (DDAP). “They are taking out second mortgages on their homes for facilities that are not providing quality care.”

Would Dan Feola be able to get certification for his recovery homes under the future regulations? Well, that gets tricky, says Smith.

Many recovery homes are started by people in recovery themselves, Smith explains, and that can be a good thing. But some good recovery house operators who are in recovery have criminal pasts. So you can’t just say that a person with criminal convictions is ineligible to open a recovery home, and Smith couldn’t say whether Feola’s convictions would preclude him.

“[We are still trying to figure out] the criteria for what is acceptable versus not acceptable,” says Smith. “How long ago? How severe?”

As for Light the Way, it turns out that some of the women living in the home had become aware of Feola’s past but decided to stay there anyway, the mother of three told us. She says that when she found that out, she was mad at the other women for not telling her. After all, she might have brought her girls over for visits had her stay not been so brief.

“But you have to understand,” she says. “We’re in such hard spots sometimes. If you cause trouble, you could be homeless the next day.”