Ashley Jimenez says police were called on her family at the chain’s University City location when the aftermath of a refund request escalated. 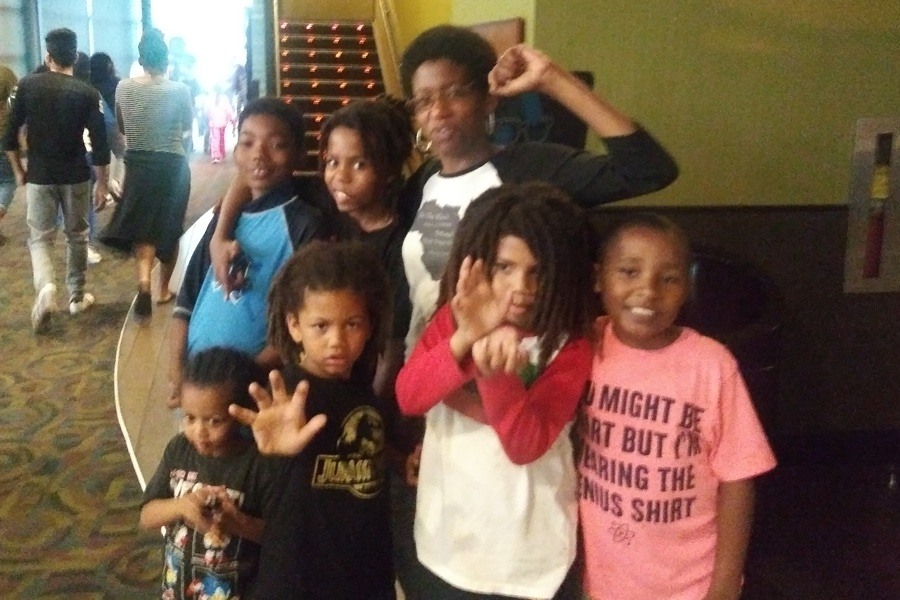 Ashley Jimenez and her children at the Cinemark Theatre in University City.

A black family at the center of a viral video depicting a confrontation with multiple members of the Philadelphia Police Department inside the Cinemark theater in University City on June 22nd has called for a public rally outside the venue on Friday morning.

In an interview with Philadelphia magazine, Ashley Jimenez, the mother who filmed the incident, said that she and her husband, Ismael, had requested a refund from the theater’s general manager after a persistent beeping sound had disrupted a screening of Jurassic World. The manager granted the refund but then told them they had to leave immediately, she said, even though all but one of the six children they had brought with them were still inside the auditorium.

When the couple moved to retrieve the children anyway, Jimenez said, they were followed by a security guard and a police officer who was working on site. Jimenez said that when she emerged from the auditorium with the children, she found that another five officers had arrived on the scene, at which point she began filming with her phone. The situation was eventually deescalated by one of the responding officers and no arrests were made.

In a statement released to local TV stations on Tuesday, Cinemark disputed Jimenez’s claims that she was told she could not get the children and that the manager called the police when the family did not immediately leave. “There was an erroneous social media report that mentioned the family was not permitted to return to the auditorium to retrieve their children,” the statement read. “At no time was the family restricted access to their children. A Philadelphia police officer, who was working security at the theater, was monitoring the situation and requested additional police presence.”

Jimenez rejected the theater chain’s account of the incident. “This is another insistence of absurdity on the part of the theater,” she said. “We have reached out several times to the corporate offices of Cinemark and were assured each time we would be contacted, but have had no follow up from Cinemark outside of this news response.”

Jimenez said that this was “the first time [her children] had experienced [injustice] personally on this level We told them, all six of them, how proud we were of them for being strong and standing with us. They were calm after the ordeal and kept stating they did not know why so many cops were called and that it was ‘all so racist.’ We reminded them this is a common occurrence in our society, and so their courage, strength, and determination to be recognized and treated as human beings must be a common occurrence.”

While preparing for Friday’s rally, Jimenez said her family plans to “explore more targeted actions and possible legal recourse” following Cinemark’s statement. “Our intention, along with grassroots organizations doing this work here on the ground in Philadelphia, is to elevate a far too common occurrence in the everyday lives of black people,” she said.