Here’s Why You Need to See Sebastian Maniscalco ASAP

Five takeaways from his show at the Borgata. 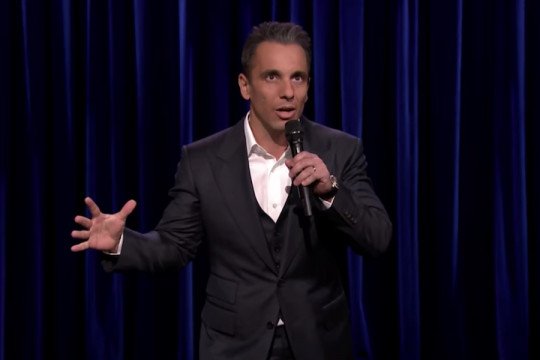 Sebastian Maniscalco is currently on the second half of his Stay Hungry tour, with many shows at the Event Center at the Borgata all week, as part of their 15th birthday celebrations. If you are a fan (and even if you are not), he’s worth seeing in person. Here’s why.

1. This tour is the culmination of an epic few years for Maniscalco.

(Meaning: He’s minutes away from being huge.) After spending over a decade doing the textbook Hollywood thing (moving to L.A. from his hometown of Chicago; hustling as a waiter until his big break) he’s finally getting his with kudos from Esquire, The New York Times and People magazine, his own SiriusXM show and roles in movies with stars like Amy Poehler, Jeremy Renner and Robert De Niro. In 2017 he was one of the highest paid comedians in the country, jumping onto the top ten of a Forbes list for the first time. And this year, he came out with a book, Stay Hungry, which is the name of this current tour. This show was also filmed for an upcoming Netflix special, so this is a good get for the Borgata, which is pulling together an amazing year of programming for their 15th birthday celebration. My point: If you go, you can say you saw him when. (Note: All but one of his remaining shows at the Borgata this week is sold out; tickets on Stubhub are going for upwards of $300. But he recently announced he’ll be back in Philly for one night in September.)

You’ve read that Millennials do not dig stand-up. This earnest group of humans sees disparaging comments about any particular group as corrosive and harmful. Whether you agree or with them or not, Maniscalco’s brand of comedy is pretty hard to take issue with. He does this mostly (and brilliantly) by making the jokes about his peculiar take on the world, not by taking anyone else down. His routine is pretty much funny to everyone, although even more so if you relate to him at all: social awkwardness, immigrant family, etc.

3. His signature physical comedy was on full display, but this time it felt a little forced.

I dare you to not chuckle when Maniscalco does his twitchy motions and face contortions: he can make a mundane interaction hilarious with just a neck flick and eyebrow raise. For this show, however, it felt like some of the bits were thrown in just for that reason. The alpaca story (and his stage-spanning alpaca strut) was the weakest of the night.

4. Don’t be late: Pat McGann, the opening guy was great.

He did a bunch of easy dad/family jokes that were quick, relatable and funny. We laughed for all 15 minutes.

5. Pay attention: Maniscalco’s jokes are always better the next day.

On the ride home from A.C. the next morning, as we recalled all the bits, the show got even funnier. The body shop guys, the gym guy, his Italian grandparents. And even the part about the alpaca, because really this was our first taste of Maniscalco as a dad, and the sentiment was dead-on. (Over-the-top 2018 parenthood.) Looking forward to more of that in the future.