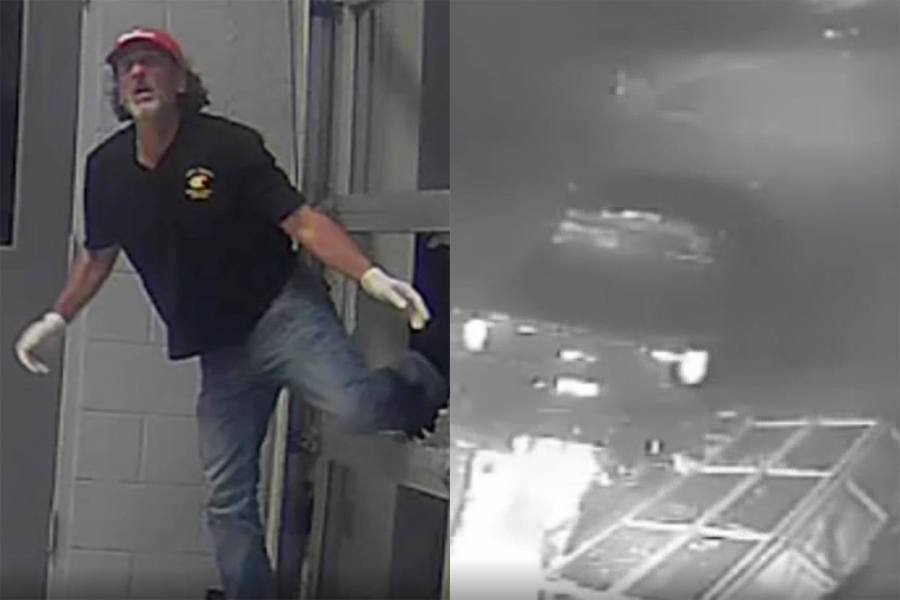 Left: The suspect, seen in surveillance footage. Right: The truck after plowing through a garage door. Images via 6ABC

Police in South Jersey are seeking the public’s help in apprehending an alleged car thief so brazen that his actions have drawn comparisons to heist movies.

Surveillance video from Burlington Chevrolet captured the unbelievable lengths that police say the suspect went through to boost a customized 2017 Chevy Silverado over the weekend, from his shattered-glass entrance to his extreme exit through the front of the dealership.

Police say the pickup truck was inside the service center of Burlington Chevrolet before a man broke in early Sunday morning and drove the vehicle through its glass bay door. General manager John Broderick told 6ABC that a cleaning crew had been working at the service center, which is why the alarm wasn’t set.

“The first time seeing the video is unbelievable — it’s like watching a movie,” Broderick said. “In 20 years, I’ve never had to deal with that before.”

Officials with the Burlington City Police Department told dealership management that the suspect took officers on a high-speed chase through several neighboring townships before they lost track. The suspect allegedly committed another robbery in Mt. Holly before apparently ditching the damaged truck in Camden.

Damage to the bay door and truck is estimated around $50,000. Burlington Chevrolet is offering a $2,500 reward for information that leads to the arrest of the man seen in the footage. Anyone with details regarding the suspect is asked to call Det. William Ruskowski at 609-386-0262, ext. 266.