A series of three videos depicts the arrest of 20-year-old Emily Weinman from the lead officer’s POV. 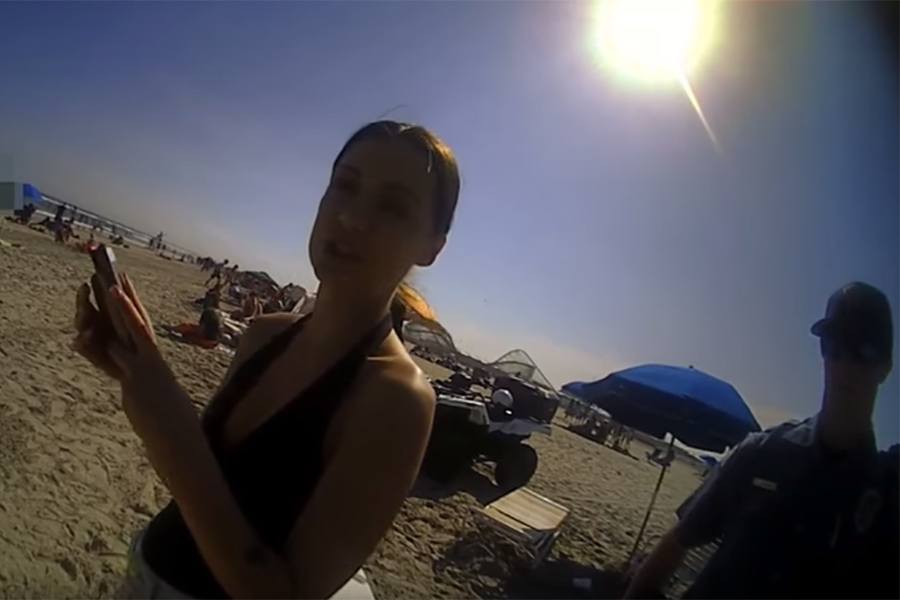 The Wildwood Police Department on Wednesday evening released footage captured by the body camera worn by the officer directly involved in the arrest of a 20-year-old mother on the beach over Memorial Day weekend. A video of part of the incident that depicts the officer striking the woman, shot by a bystander, went viral soon after the arrest.

The series of three videos, seen here edited into one video by 6ABC, begins with the officers administering a breath-alcohol test to Emily Weinman and an unidentified friend on May 26th. (Police say the footage is split into three individual clips because the officer’s body camera was turned off twice: once when the officer believed the situation had been resolved, and a second time when Weinman pushed the officer and apparently hit the off button.)

After the officer re-activates his camera, the second video starts with Weinman debating with police. Following a period of muted audio while the officer is speaking to the other woman, Weinman can be heard not complying with the officer’s request for her name. The officer then asks another officer whether he has cuffs, and Weinman takes a few steps away from the officers. The video ends with her appearing to push the lead officer, momentarily blacking out his camera again.

The third video begins mid-confrontation, with Weinman being restrained on the sand by the officer. As she continues to struggle, background voices can be heard telling her to “relax” and “stop resisting.” Weinman screams that she’s being choked and begins to flail her arms and legs before the officer announces “That’s it” and begins striking her.

The initial clip of the arrest shared on Twitter has viewed more than 6 million times and ignited a debate over whether such force was appropriate. In a since-deleted Facebook post, Weinman admitted to having beer on her but claimed that she wasn’t drinking. She said the situation escalated after she asked the officers why they didn’t have anything better to do, then refused to give them her name when they attempted to write her up.

Wildwood mayor Ernie Troiano Jr. told the Inquirer that Weinman insulted the officers and spit on them; Weinman had denied those claims and insisted that she was attempting to get sand out of her mouth after the officers put her on the ground.

The Wildwood police department says the incident remains under investigation and that it will release its findings after final review by the Cape May County Prosecutor’s Office. The department says the delay in releasing the body camera footage was the result of the time it took to conceal the identities of juveniles and other citizens in the video. The officers involved in Weinman’s arrest have been identified as patrolmen Thomas Cannon, John Hillman, and Robert Jordan.