Meet the Philly Artisans Who Have Hit the Big Time

Convinced everything worth coveting is made somewhere else? Think again. 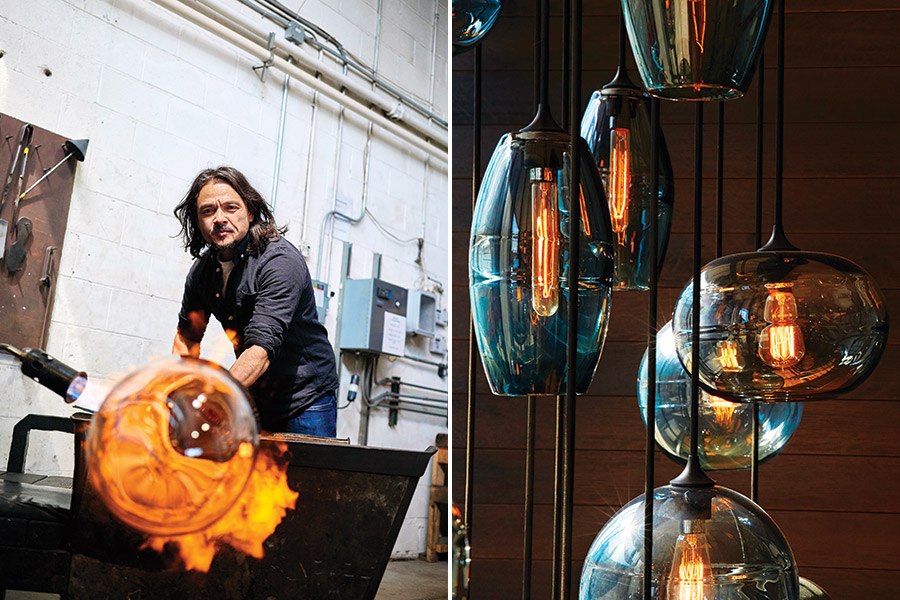 Philly’s not just a town of tinkerers. These highly acclaimed artisans are producing the kinds of goods that are making us a manufacturing town once more.

John Pomp has one of those “meant to be” stories: When he first tried glassblowing, in college, he was instantly hooked. “I was like, ‘This is what I’m going to do for the rest of my life,’” he recalls. The 44-year-old Johnstown native finished his degree at the Tyler School of Art before moving in 1999 to New York City, where he found success early on: His sculptural, ombré vases were sold at Barneys and Tiffany. By 2008, he was ready to expand and returned to Philly to do so. “There’s an amazing living community, like real working artists. I wanted to come back to be a part of that,” Pomp explains. He now owns two buildings in Fishtown in which 40-plus John Pomp Studios staffers turn out modern, nature-inspired light fixtures, furniture like mid-century- leaning credenzas, and mirrors, often combining metal, leather, wood and glass. “We make everything from scratch in our facility, beginning to end,” Pomp says, “and I’m really proud of that.” His goods get shipped around the world; Mark Zuckerberg is a client. 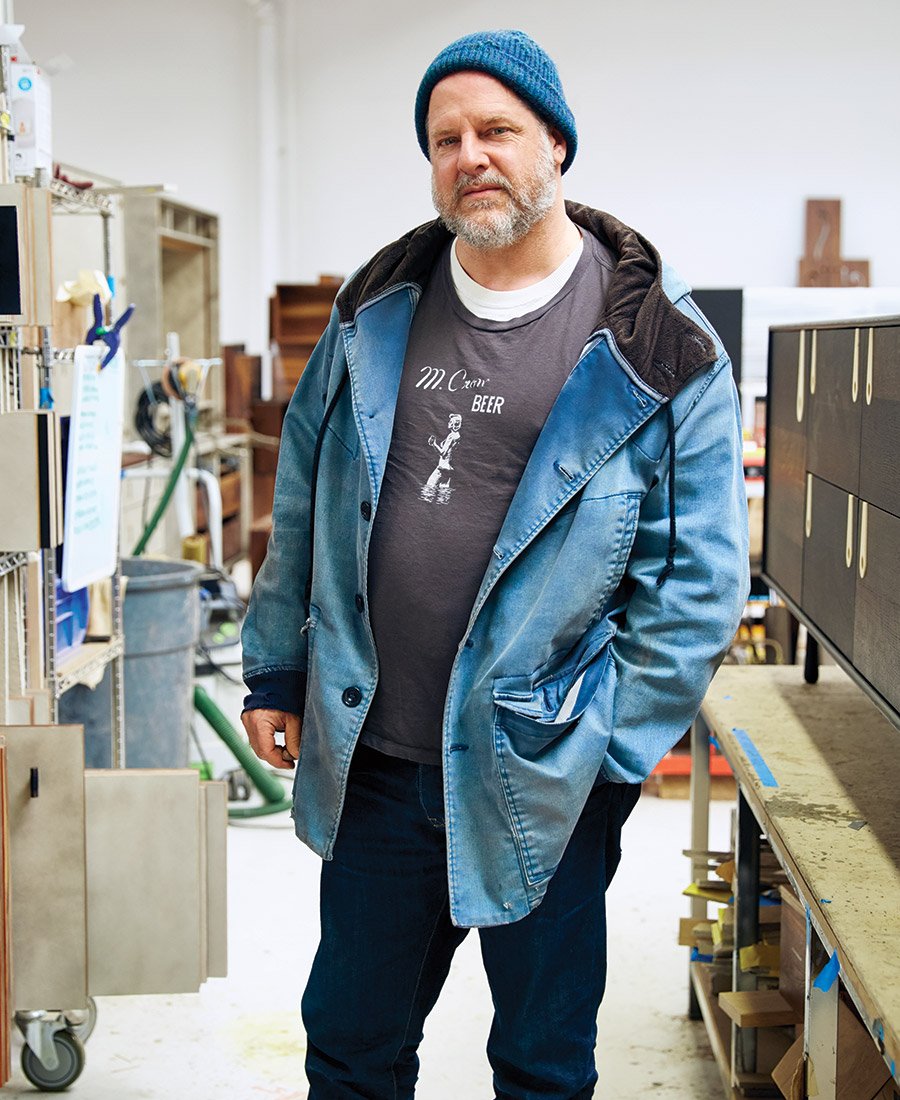 Out of a 150,000-square-foot facility in North Philly, Hays, 49, and his 100 or so artisans and engineers fabricate, well, pretty much everything: rustic steak knives, $400 jeans, and $2,500 hand-painted beach blankets for his lifestyle brand, M. Crow, which operates stores in Soho and his small hometown in Oregon. (Website tagline: “I want to create everything I need in my daily life from scratch.”) But that’s really a secondary project; it’s the furniture he’s been making since 1995 for BDDW (the showrooms are in NYC and Milan) that has landed him in Vogue, Architectural Digest, the New York Times and the Wall Street Journal. Some of his top items: a leather sling chair with a built-in table, a bleached maple desk on bulbous brass footings, and a cherrywood ping-pong table. “It’s a crazy wild beautiful mess,” the artist and self-proclaimed punster says of his business. Up next: M. Crow beer and a podcast. 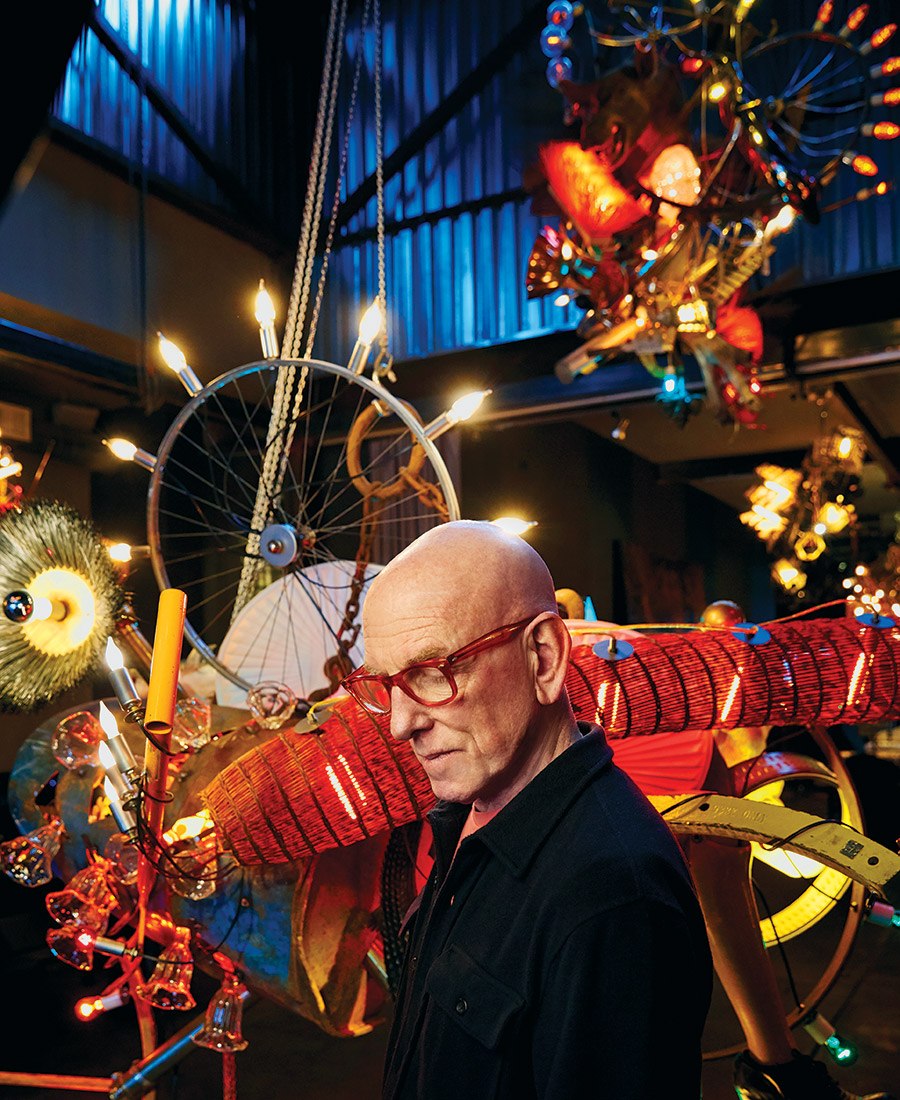 The master of miscellany

Muller, 72, has just returned from Tokyo, where he was assembling one of his chandeliers for a restaurant. (His custom fixtures — huge and multifaceted, made of found objects — often require a final in-person touch.) He’s done installations in museums, restaurants and stores around the world, and in private homes. One of his most ambitious projects, a $200,000 piece made from an old station wagon, landed on the cover of Interior Design magazine. Muller, a Bronx native, has always been in the arts, although his path was winding: After coming to Philly in the ’70s to study film, he became a dancer and then a ceramicist. “That morphed into assembling objects and integrating light,” Muller says. In 2003, he and partner RJ Thornburg, an interior designer, founded Bahdeebahdu in Kensington. On the name: “When I first came to Philadelphia, outside my window on 18th Street every morning I would hear ‘Bahdeebahdu! Bahdeebahdu!’” Turns out it was a man calling his dog. “It stuck in my mind for 20-something years.” 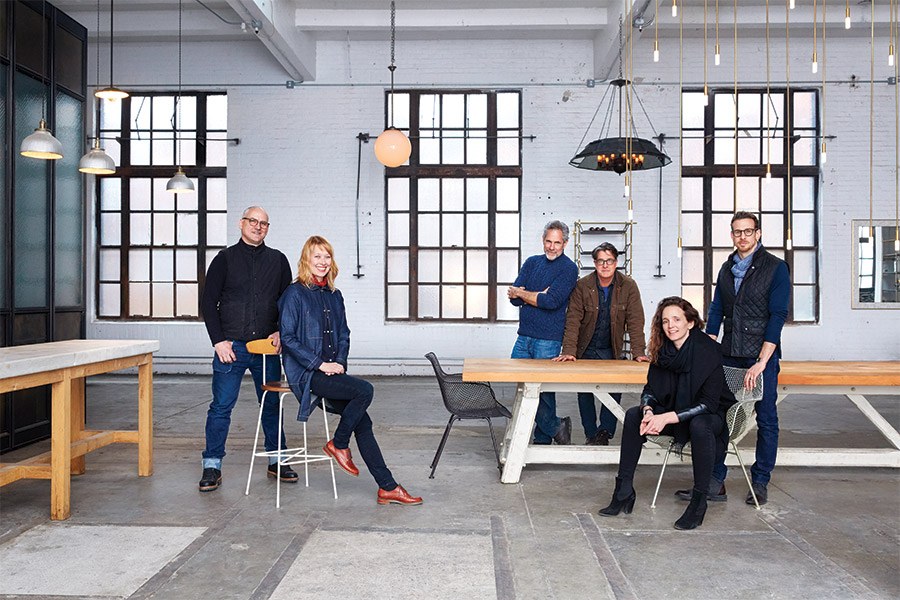 When Adam Kamens bought a North Kensington warehouse in 2014, its future was uncertain. The 47-year-old owner of Amuneal — which makes industrial magnetic shields and custom showpieces like gunmetal kitchens and brass shelving units — cleaned up the space and was using it to photograph his products. Then he had an idea. “It’s really sort of a romantic space,” says Kamens. “And I drove from there back to my office and on the way called a couple friends, and I said, ‘Hey! If I opened a showroom, would you guys wanna do it with me?’” Those friends were Brian Foster, 57, and Ernie Sesskin, 61, of furniture company Groundwork Home, and Robert True Ogden, 54, who owns RTO Lighting and Lostine, a home furnishing company, with his wife, Natalie Page. (Page, 47, is an accomplished ceramicist.) Other artists also display their work at American Street Showroom, which is run by Kim Kamens, 43. “I think what it’s done is reminded people how many cool things there are in Philadelphia … and exposed Philadelphia makers to this customer base around the country,” says Adam Kamens. Ogden agrees: “When clients first walk into that space — they could be from the best design firm that we know, and they still go, ‘Oh my God, this is magnificent.’”

RTO Lighting and Lostine
Ogden uses historical inspiration and found objects for the sculptural yet functional light fixtures, like his Mirrored Chandelier, in his RTO Lighting brand, which counts Natalie Portman and Paul Simon as clients. Lostine, the expansive home-goods company (Tyler Hays of BDDW is a partner), makes and sells home goods and polished-rustic furniture, like the Marble Top Prep Table.

Groundwork Home
Life and business partners Sesskin and Foster have been making locally sourced build-to-order furniture since 1993. Their goods — which include large farm tables, benches, and signature tables that have zinc tops and tree-root bases — are modern and timeless. Their craftwork has been featured in House Beautiful and Better Homes & Gardens and on the cover of Elle Decor, to name a few.

Amuneal
The Frankford Panel System (it sells for almost $90,000), the Collector’s Shelving Wine Unit and the Drop Light fixture are just a few examples of Amuneal goods. Adam Kamens’s parents founded the magnetic shielding company in the 1960s, and he added the custom fabrication side in the late ’90s. Amuneal now does builds for hotels, retail shops and designers around the world. (Latest project: a three-story set of stairs for Hudson Yards.) 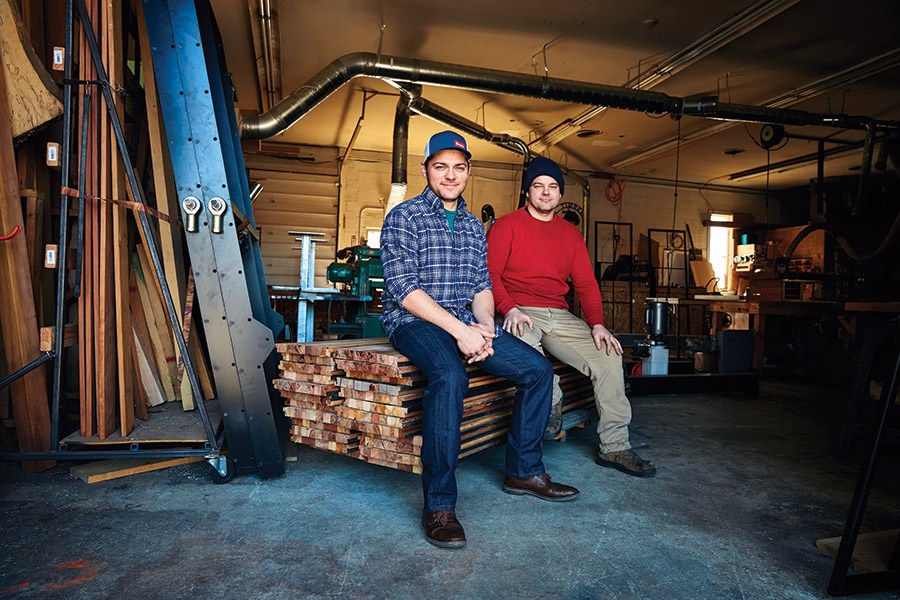 Louie Andracchio, 27, credits the blue-collar, figure-it-out-your-damn-self household he grew up in for instilling in him a desire to build things. So when he became roommates with Jack Braithwaite, 27, who was moonlighting as a contractor while going to college, it was inevitable tinkering would occur in their Fairmount house. “We’d build random stuff, like Skee-Ball tables. It was horrible,” Andracchio says. With guidance (especially from Andracchio’s older brother), the two found a groove, and Timber Forge was launched in 2015. The residential commissions started piling up — live-edge wood desks, kitchen islands made out of shipping pallets — but eventually, businesses and restaurants started calling. To date, they’ve made tables, steel stairways, benches and more for the Pennsylvania Horticultural Society, Vetri and Kensington Quarters, and have shipped goods all over the country. One project they’re especially proud of: stool bases for a center in Yosemite National Park. 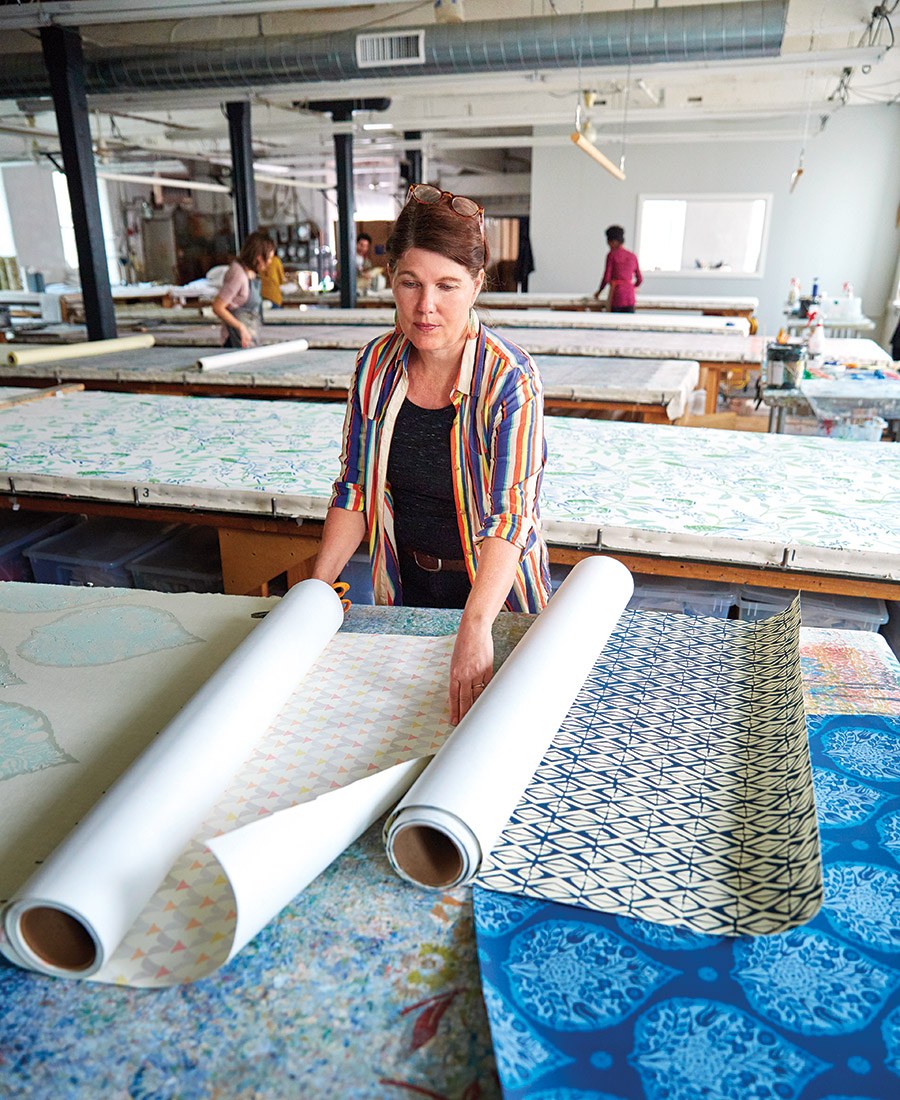 In the 1980s, Liz Galbraith and Ephraim Paul, her high-school-friend-turned-husband (and the business brains behind their company), moved from Chicago to Old City, where Galbraith set up a paper-making studio. Decades later, those papers — and their vibrant, rooted-in-history patterns — evolved into a full-fledged textile emporium that the pair, both 55, operate out of a studio in Manayunk. There, the Galbraith & Paul team of artists makes pillows for Room & Board, designs rugs for Holland & Sherry, and hand-blocks fabrics and wallpapers for high-end showrooms in places like Melbourne and Paris. Yet the couple hasn’t strayed from their Old City roots. “We are so much about doing things by hand and celebrating the artisan,” says Paul. “We really believe in that.”

Published as “Meet Your Makers” in the May 2018 issue of Philadelphia magazine.