A coalition of concerned Hillers say the revamped Market at the Fareway violates a 1981 property agreement with residents. 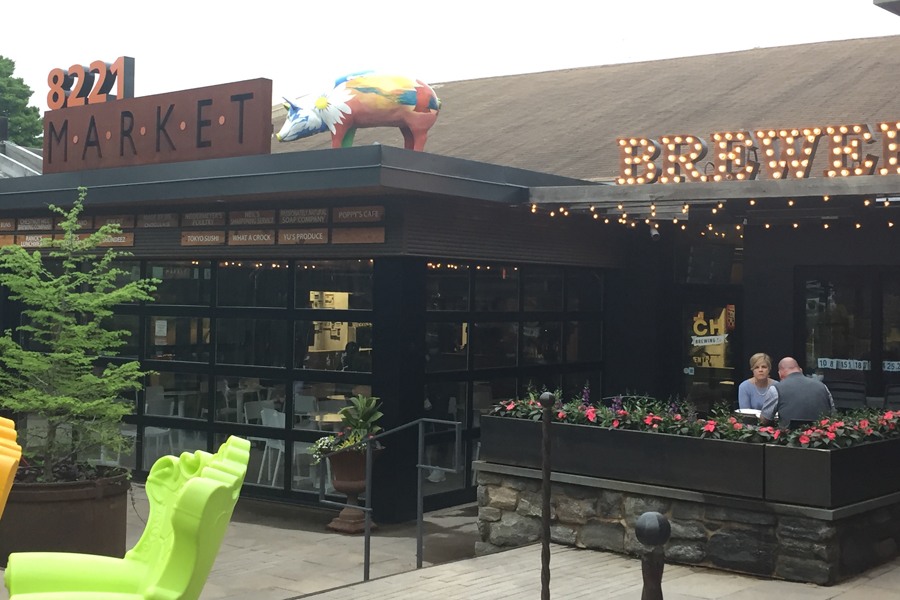 After a year of public grappling and tense negotiations that yielded little progress, a group of neighbors in Chestnut Hill has jointly filed a civil suit against the owner of the Market at the Fareway, a farmer’s market and outdoor beer garden that the plaintiffs say operates in direct violation of a 1981 property agreement with residents.

According to the lawsuit, filed Tuesday in Philadelphia’s Court of Common Pleas, the “willful and blatant” disregard of restrictions outlined in a 1981 agreement with Glengarry Properties (which also owns the adjacent Chestnut Hill Hotel) has harmed neighbors in a variety of ways.

The market was retrofitted with a new exterior in 2013, when a popular brewpub was added to its growing number of tenants. A more permanent outdoor seating area, the source of much contention, was completed piecemeal over the next several years. The complainants say Glengarry’s rehab has resulted in “excessive noise, light, odors, fumes, disturbances, parking problems, diminished privacy and interference with sleep and quality of life.” The plaintiffs further claim that the market is responsible for the deterioration of the residential neighborhood and depreciation of property values.

“My folks are pretty frustrated,” says H. Fintan McHugh, a Media-based attorney who represents the 25 plaintiffs named in the suit (who inhabit 16 individual households on blocks bordering the market). “There is some animosity between the parties, no doubt about that.”

According to the suit, Glengarry Properties never requested nor obtained consent from the neighbors before circumventing the restrictions of the 1981 agreement. McHugh tells Philly Mag that the defendant is essentially making money because of the alleged violations, thus incentivizing the company to continue with business as usual despite the complaints from residents.

“Many of the defendant’s activities and installations were done in a clandestine and illegal manner,” the suit states. “Such as constructing the trellis structure at night on weekends, failing to post permits, failing to follow permit and zoning requirements … violating the permit requirement against additional outdoor seating … and by reducing the size of the parking area and removing two mature trees without permits.”

McHugh hopes that the two sides can come to an agreement before heading to trial, but he says there has been little give-and-take so far in icy preliminary discussions. According to the lawyer, the plaintiffs are primarily seeking an injunction that would halt some of the nuisances they have been experiencing. Additionally, the coalition has requested punitive and compensatory damages in excess of $50,000.

“Glengarry Properties had been working with a representative of the neighbors to address some concerns that had been raised and was surprised by the sudden decision of some neighbors to file a lawsuit seeking to shut down the beer garden and some other businesses in the market,” Ralph Wellington, Glengarry’s attorney, said in a statement. “We are continuing our efforts to try and work things out amicably and hope that can be done.”

“The ball is in their court,” McHugh replies.