The CEO of Center City’s business improvement district says its 2018 “State of Center City” report shows reasons for both optimism and pessimism about Philly’s future. 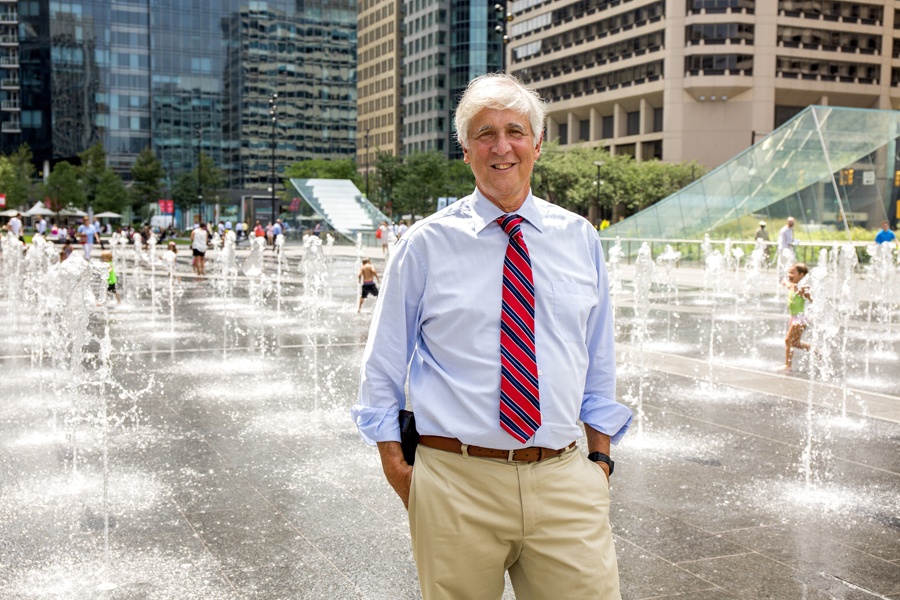 As the founding chief executive of the Center City District, Paul Levy has played a hand in each of the business improvement district’s annual “State of Center City” reports over the past two decades. Every year, the staff at CCD carves out approximately six months to collect and analyze copious amounts of data relating to the current state of affairs in Philly’s downtown area while also projecting what the future might hold.

The 2018 report, released on Tuesday, paints a portrait of a city that has made great strides since the nadir of de-industrialization, yet still lags behind many peers. Among its key findings are:

We sat down with Levy to discuss CCD’s latest findings and why there are both reasons for optimism and pessimism looking ahead.

Could you share a brief history of the State of Center City report?
When we did our first report 20 years ago, it was an organizational report, focused on CCD activities. It has steadily evolved into a comprehensive report on the downtown marketplace, with comparisons across diverse sectors to many other cities. Now, it’s not only “How are we doing?” but also “How are we doing in comparison to our peer cities, and what do we need to do to perform even better?”

What are the goals for the report each year?
Our goal is to put a tremendous amount of information in this package, but it is deliberately not purely promotional. If there is good news or bad news, it will be in this report. The “State of Center City” is meant to be a candid look, but in all cases in which we highlight problems, we offer a set of policy recommendations on what should be done. I would differentiate this report from the very good work that Pew does in which they say “Here’s the good parts, here’s the bad parts … you decide.” We are very much “Here’s the good parts, here’s the bad parts, and here is our prescription.” It’s all part of what we see as our role in shaping public policy.

Name one finding in the 2018 report that provides reason for optimism regarding the city’s overall future vitality.
After decades of job loss, Philadelphia has added jobs for 12 of the last 13 years.

What’s one point that may be cause for concern for Philadelphia as a whole moving forward?
Nationally, we are in the midst of an urban-led economic recovery. But out of the top 25 cities, Philadelphia’s rate of growth is 24th. Slow growth is simply not good enough to enable Philadelphia to reduce its high unemployment and poverty rates.

Would you say that Mayor Rizzo ruined things for my generation of city residents by starting the precedent of bumping the wage tax in the 1970s to the point where Philly now sits below the national average in year-over-year job growth and sees more and more employment opportunities flee for the ’burbs?
No one mayor is to blame. From the 1960s to 1990, multiple mayors and City Councils kept raising taxes trying to compensate for job and population decline. Only when Mayor Rendell and Council President Street began a process to break that cycle did Philadelphia begin to add jobs.

Philadelphia is the poorest big city in the country. Since 1970, the rate of poverty has increased in every neighborhood — except Center City. Can you explain what makes the downtown area immune to this phenomenon?
The renewal of Center City and University City that began in the 1960s and 1970s helped us create a new economy built on post-industrial jobs. By the 1990s, more and more people wanted to live close to where they work. So job growth and population growth go hand in hand. The rising poverty rate in many other, older neighborhoods is due in part to so many working- and middle-class families following their jobs to the suburbs. To create opportunity for all, we need citywide job growth.

The report frequently mentions the “greater Center City” area as opposed to the “core” downtown sector. How did these new boundaries become defined?
The issue of how to define Center City is one we started wrestling with once we saw the 2000 Census. It was clear that the traditional boundaries of what people called Center City was steadily growing. We tried several different indicators, and the one that we really hit on is this product called the Local Employment Household Dynamics, which puts together where people live and where people work.

On the basis of that, 25 percent of the working residents of each neighborhood work in Center City. Within these boundaries that we’ve set from Girard to Tasker, it generally is in that 40 to 42 percent range, and you can actually watch areas change over time as people start to move into them. We define this as the greater Center City area and are wrestling with what we want to do with Fishtown and Kensington moving forward. I think we’ll stick with these boundaries.

Figures show that people in their 20s are continuing to move into the greater Center City area at a high rate. Do you expect most millennials will stay or eventually move to the suburbs like other generations of Philadelphians? How does CCD propose that the city keep these young urban professionals in Center City?
The trends are very positive in keeping millennials in the city as they have children; 75 percent of the children living in Center City today are attending public schools. To keep everyone, especially those carrying debt from college, we need a faster growing number of jobs.

In your opinion, what’s the most exciting development coming to Center City over the next several years?
I’m biased here: With CCD finishing phase 1 of the Rail Park in June, I’m excited about going to work on renovating the rest of the elevated rail viaduct.

Since we’re lagging behind some of our peers in terms of growth and evolving into more of a 21st century city, what recommendations has CCD made for Philly to reach its full potential?
The city is in the best position economically and demographically than at any time in the last 50 years. But we have an obsolete tax structure, born in the manufacturing age, that is retarding growth, driving people and businesses out of the city, and keeping too many people in poverty. The plan for job growth through tax reform is available at philadelphiagrowthcoalition.com.