How a Novelist From Seattle Became Head of the Italian Market

South 9th Street Business Association manager James McCrone on the fate of the Rizzo mural, the similarities between Philly and Italy, and whether his next political thriller involves City Hall. 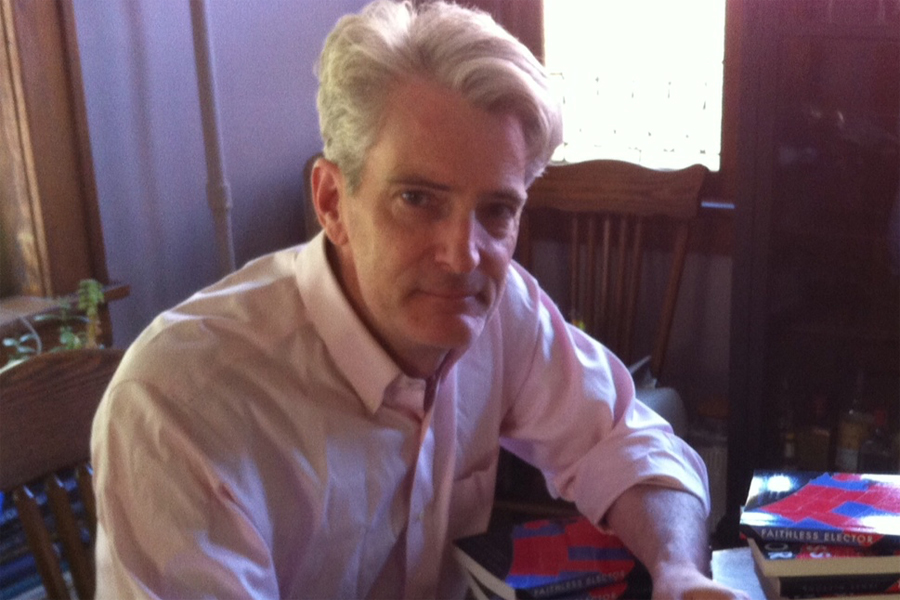 Philly is a city famous for keeping neighborhood business in the neighborhood. So how did an author hailing from the Pacific Northwest become the leader of the South Philly-est of all South Philly neighborhood districts in January? For South 9th Street Business Association manager James McCrone, your guess is as good as his — but he wouldn’t want to be anywhere else.

We talked with McCrone, a Seattle native and author of the novels Faithless Elector and Dark Network, about his qualifications for his “dream job,” the similarities between Philly and Italy, and why the notion that the Italian Market is in decline is bogus. The interview has been lightly edited and condensed.

What brought you to Philly?
My wife is a native — she grew up in Germantown/Mount Airy on Hortter Street. We met out in Seattle, which is where I’m mostly from. Her mom and dad moved to 2nd and Catharine in the ’80s. We’d come here to stay and I’d visit the market. When we finally made the decision to move here — no exaggeration — I got a map out, put a pin down at 9th and Christian, and drew a one-mile circle around that point. I basically told the realtor not to show me anything outside that area.

And how exactly did an outsider become manager of the 9th Street Business Association?
You should probably ask our board of directors that question, but I think they were looking for a fresh perspective. I do have a background in this sort of thing – I was the director of the Bloomfield Center Alliance in Bloomfield, N.J., prior to 9th Street, and before that I was the director of Main Street Highland Park in Highland Park, N.J. I have about 11 years at the director level, and the downtowns in those places equates roughly to a district in Philadelphia. I’m hopeful that some of what I’ve learned and the skills that I have, such as they are, will translate reasonably well here.

Where did you hear about the job opening?
A friend of mine actually saw it before I did. The subject line in the email sent to me was “Your dream job just came open.” I’m particularly excited by the history of the place — I just love it. I’ve been coming here to the market as a customer for 20-plus years and it is my dream job.

What’s the day-to-day like in your role?
The job is part-time, about 20 to 25 hours per week, with the understanding that at certain times — with the festival, especially — it’s sort of all hands on deck and if you work an 80-hour week, that’s just the way it goes. Typically I’m in the visitor’s center on Tuesdays and Wednesdays. Then I try to be there for at least part of the day on Saturday. The rest of the time I’ll sort of work remotely and go to different community meetings.

We’ve been keeping tabs on this grassroots movement to rename the Italian Market something less … ethnic. What is your group’s thinking in regard to this idea?
We call it the 9th Street Italian Market, which is a nod toward both the area’s very strong roots and past, but also acknowledges that it’s a broader thing in the present. If you were a tourist and were to ask anyone in our visitor’s center, you’d get into this long discussion about how this has always been a diverse market. Irish, Polish, Jewish, you name it, from the get-go — and Italian, obviously. Over the last 15 or 20 years, we’ve been getting more Mexicans and Central Americans moving into the neighborhood and taking over businesses. It’s fantastic. They’re simply adding to the mix. Barbacoa and Blue Corn are doing amazing things. Taqueria La Veracruzana on Washington Avenue is great, too. The Rim Café — the owner is French! From Nice. He and I have talked a lot about that with me trying out my broken French. There’s always been this mix.

Do you or the businesses have an opinion on Mural Arts seeking public comment on the Italian Market’s Frank Rizzo mural?
Obviously we support the business owner, Nina’s Trattoria. It’s my understanding that Mural Arts is also looking to work with him to find out what indeed he wants. It is a contentious issue with Rizzo. Something, or nothing, will happen. It would probably behoove Mural Arts to look at this more from a policy perspective. What to do when a work becomes contentious? How do they respond? I understand that they don’t currently have that policy in place.

But it’s really a non-issue in this neighborhood. People want to see the mural stay. It’s part of the market and has been since 1995. That’s a long time. The last part of this is whether we are giving into vandalism by removing the piece. People may feel strongly one way or the other, but we’re talking about a teeny-tiny group that’s doing the actual damage.

Would you consider accepting the Rizzo statue if Mayor Kenney were to offer it to the Italian Market for permanent placement?
Nobody has brought this idea up — let me be clear with that. But even hypothetically speaking, I couldn’t say one way or the other because I truly do not know. I’d only be speculating. That opens up a whole bunch of questions regarding revisionism and giving in to vandalism.

I’d imagine living in South Philly is quite different from how you grew up in Seattle.
Oh yeah, but I love Philly. When I mention I grew up in Seattle, people will sometimes say, ‘Oh, why did you come here?’ And the truth is, I like it better! I do love Seattle, too. I have a daughter who still lives out there and friends we go visit, but I’m here. I like the energy, I like the people – I just can’t imagine being anywhere else. You think of a city like New York … it’s fantastic, I guess. But Philly, you can really get your arms around. There’s a gregariousness here with this ‘We’re all in this together’ mentality that I just don’t get tired of. I feel blessed.

And I’m already getting provincial living in South Philly. Someone might tell me about a place and mention it’s on Market Street and I think maybe I’ll get there some day. I walk or take the bus pretty much everywhere. I don’t need to leave my neighborhood. I shop at the Acme for a lot of things, quick trips to the little corner stores, and then I’ve got the Italian Market for pretty much everything else. When I buy new clothes every four or five years or so, I’ll go downtown I guess.

Have you ever been to Italy?
My wife lived in Italy for a number of years, and I’ve found that some of the things she learned living there has helped me here. So when you’re merging, if you look at the guy – you’re not getting in. What you have to do is use your peripheral. You see him, but because you haven’t turned toward him, he can’t be sure you see him. Therefore you might get in. But if you look at him directly, forget it. Same with when you’re a pedestrian. Like in Rome, drivers are just going. In Seattle, if you make eye contact, cars will stop because they’re nice people out there.

How did you become an author of political thriller novels?
I like politics. I like thrillers. And they say if you don’t see books out there that you want to read, then write one. I have a master’s in fine arts in creative writing from the University of Washington. A professor of mine, Charles Johnson, won the National Book Award the year I got my MFA, so I basically have had unrealistic goals ever since. I like the way that thrillers force you to keep the story moving along. You don’t go wandering over here on some two-chapter tangent — yet the best still can take the time to be beautiful, if you will.

In a political thriller, I think it’s key that you don’t have an axe to grind. It’s not about these people over here are right and these people are terrible. What’s been really exciting about the first one, Faithless Elector, is that it’s become a bit of a Rorschach test. I’ve gotten messages on Facebook and Twitter from folks who I can see are pretty conservative from what they’ve posted and they’ll say ‘I know what you’re talking about, man. I get it’ and then I’d get people who I can basically sense are pretty far left going ‘Haha, we understand!’ They both can’t be right, but at the same time – yes they can. That’s what’s really gratifying, because in both stories it’s about more or less ordinary people standing up for society, not this side or that side.

Are you feeling inspired by our local politics in Philly? Is that what your third book will be about?
Uh, no. No one in City Hall need worry. This next one will be the culmination of the first two books. Unfortunately, I had a title already – Consent of the Governed – which was going to be perfect. But it turns out there’s another political thriller with the same name that was really badly reviewed and was published only 10 or 12 years ago. Right now it just says working title. My first book, about a quarter of it takes place in Philadelphia. The same amount for the second book, as well. I don’t know that Philly will figure into this third one. It hasn’t so far and I don’t really see it doing that.

What do you say to the people who believe that the Italian Market is in decline?
The market is not in decline. In fact, it’s better than it ever was. This is a vibrant, historical place with a lot to offer. My job is to get that word out as much as possible and increase foot traffic. One of our board members was talking about how during the holidays from Thanksgiving to New Year’s is just wall-to-wall people – it’s fantastic. I don’t know if we need to be as blasted as that 365, but customers come here for its cachet. When people come over for dinner and you put out the cheeses and sausage and olives and say it came from the Italian Market, guests go “Oh!” and their voice goes up. We’ve still got a lot to bring to the table.