Our state’s top law-enforcement officer discusses his whirlwind first year in Harrisburg in an exclusive interview. 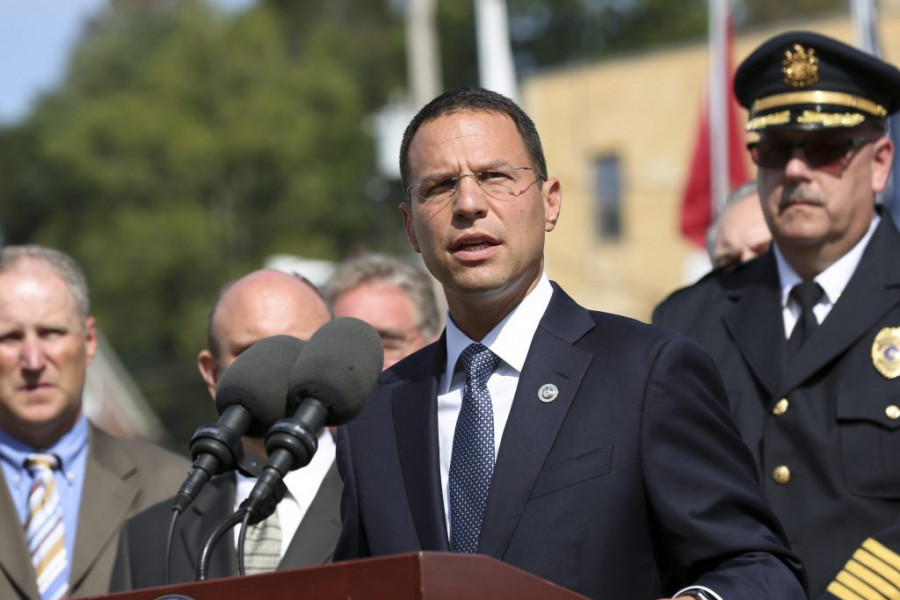 It’s been a busy first year in Harrisburg for Pennsylvania Attorney General Josh Shapiro. After dispatching Republican challenger John Rafferty in the November 2016 general election, the Montgomery County Democrat announced to the state several distinct objectives that have not only consumed his short time in office so far, but also stand to shape the rest of his term as Pennsylvania’s top law-enforcement officer.

“When I got elected I laid out three very, very specific goals,” Shapiro tells Philly Mag. “Number one: Restoring integrity to the office. Number two was dealing with the biggest threat that we face – the heroin and opioid epidemic. And three was being willing to take on the big fights, whether that be a multinational corporation or the president of the United States. But I knew I couldn’t do two and three without taking care of number one.”

With the reputation of the attorney general’s office tarnished by predecessor Kathleen Kane and the politically damaging “Porngate” scandal, Shapiro’s first order of business was restoring faith in law and order in Pennsylvania. So he cleaned house in leadership positions — save for a few holdovers he characterized as “great people” — and started thinking outside the box in terms of hiring new blood.

“Coming in, I said I wanted to hire the smartest, strongest, and most diverse staff in the history of the commonwealth, and that would be a huge part of changing the culture. We did that,” Shapiro says. “Our office has more women than men in leadership roles today. We’re more diverse than ever before. We’ve hired the highest level of people of color that have ever been here. That was a key part of it. The other part was figuring out how to marry this new team with some of the really dedicated existing people in the office.”

Shapiro credits a few crucial changes that turned the tide, ranging as wide as the implementation of his office’s first-ever code of conduct to a mandate stipulating that employees wear the same lapel pin. Once pride returned to the agency and its staff, the focus then shifted toward restoring broken bonds externally.

“What most don’t know is we were totally walled off from others in law enforcement when I first took office,” he says. “District attorneys didn’t work with us. The FBI, U.S. attorneys, DEA – our federal partners – didn’t want to work with us. It’s very, very difficult to put together a big drug case or public corruption case when you can’t work effectively with others in law enforcement.”

Speaking candidly, Shapiro expresses surprise at how quickly this positive transformation has occurred. He believed it could take years for his peers and the public to trust him, but this swift culture change allowed for the attorney general’s office to take on bigger cases and earn back the support of former allies. To Shapiro, this proves the importance of diversity, team-building, and integrity: “I want us to be the strongest AG’s office in the country, where the toughest cases come, and be the largest public interest law firm in the state. I think we’re well on our way.”

In that spirit, Shapiro has thrived in his role as Pennsylvania’s watchdog, and his office revels in fighting on behalf of the little guy. Case in point is the attorney general’s dogged emphasis on consumer protection. When President Donald Trump gutted the federal Consumer Financial Protection Bureau, Shapiro established his own version of the agency so Pennsylvanians wouldn’t miss a beat. “If Washington isn’t going to do the work, we will,” he says.

Shapiro feels especially proud of this unit, which on one day reached a $35 million settlement with Volkswagen and on another went after a guy with a Kickstarter campaign for ripping off old folks in a $35 t-shirt scam. While acknowledging that this is a silly comparison, Shapiro posits that the victims of small-scale schemes are equally deserving of his office’s attention.

Standing Up to Trump

Pennsylvania’s involvement in bipartisan lawsuits against multinational corporations like Equifax and Navient (formerly Sallie Mae) aren’t sexy enough to attract the most press – it’s Shapiro’s heated battles with the Trump administration that make headlines, even despite the attorney general’s aversion to mud-slinging. A staunch proponent of states’ rights, Shapiro boasts that he doesn’t work for U.S. Attorney General Jeff Sessions – he works for Pennsylvanians.

“I made it very clear when I was sworn in,” he says. “I said that day it doesn’t matter whether you’re a dealer on a street corner, some multinational corporation, or even the president of the United States – if you try to undermine the interests or rights of Pennsylvanians, you’re going to have to go through me.”

Making good on his threat, Shapiro has taken legal action against the Trump administration a total of 14 times since his inauguration. And for those of you who roll your eyes and believe these lawsuits have a correlating relationship with the president’s opposing party affiliation, Shapiro adamantly asserts that his concerns are not rooted in partisan or policy differences.

“It’s about the law. And he consistently undermines the rule of law,” Shapiro says. “If you don’t believe me, look at the results! Every time we’ve sued the president, we’ve won. The proof is really in the pudding there. I think the president needs to do a better job in not undermining the rule of law. Until then, I’m going to keep doing my job standing up to him.”

So what can we as Pennsylvanians expect out of Shapiro in his second year in office? For one, expanded outreach in dealing with the heroin and opioid epidemic, along with further protection against federal overreach in the state’s new medical marijuana program. Consumer rights and fair labor practices remain in focus, and the attorney general’s office will also increase its presence in Philadelphia in 2018 with the opening of a new office equipped to handle more personnel.

“One thing you haven’t heard from me is any sort of notion of ‘mission accomplished,’” Shapiro states. “We feel that we’re making progress and taking on the big fights. You’re going to see me continue to work my tail off, covering all corners of the commonwealth, in year two.”