In Young Lee was called a “chink” on an order slip at the fast-food chain over the weekend. 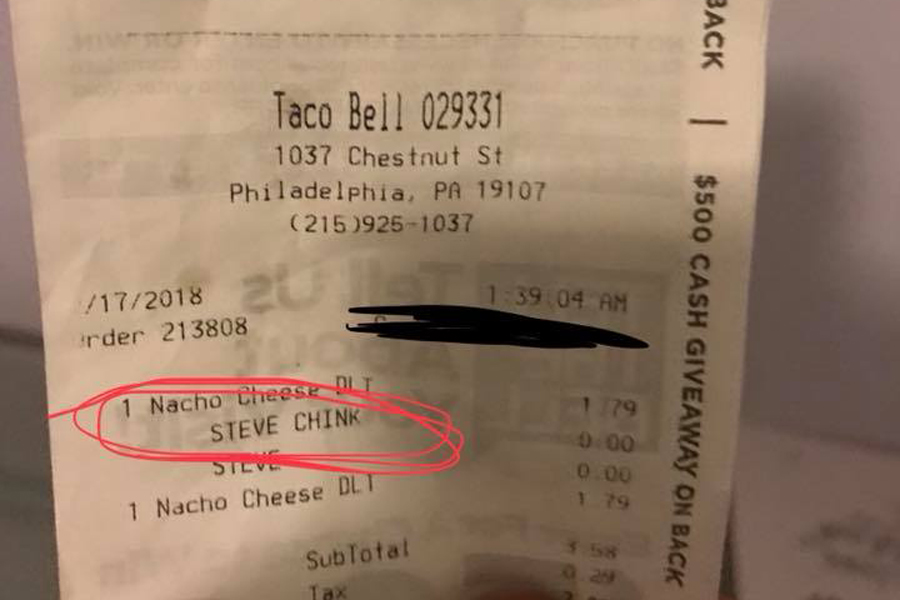 A first-year PhD student at the University of Pennsylvania was outraged over the weekend when he discovered that an employee of the Taco Bell at 10th and Chestnut streets used a racial slur to describe him on an order slip.

In Young Lee, a native of Korea, detailed the entire humiliating ordeal in a Facebook post he penned after dining at the location during the wee hours of Saturday morning. It all happened after a “fun night out on Friday” that ended with Lee and a few friends going for an after-hours bite at the fast-food chain. In hopes of making things more convenient for the employee who would soon disrespect him, Lee provided the name “Steve” for his order.

“Usually when I’m asked for a name at a restaurant or café I give a fake Anglo name instead of ‘In Young’ because otherwise I would have to spell it out (which fails most the time anyway) making it inconvenient for both the cashier and me,” Lee wrote in the post.

After examining his receipt, Lee soon realized that his name had been entered as “Steve Chink” in the restaurant’s order system. When initially questioned, Lee wrote, the cashier said that moniker was used to differentiate Lee from the other Steves allegedly patronizing the restaurant at the same time. Lee said the employee eventually apologized, but the incident didn’t end there.

“What really got me riled up is when I [later] heard him crack up jokes with his coworkers in the kitchen,” Lee wrote. “My friends and I were sitting close to the kitchen so we heard him using the word ‘chink’ again to describe the situation as he laughed with his coworkers (where is your remorse?). This is when I snapped and stormed to the counter and started yelling at him.”

A manager then got involved, allegedly first trying to deflect blame and condemn Lee for his expression of anger. That’s when fellow customers stood up on his behalf and the man finally apologized for the situation. Taco Bell’s public relations team has since issued a statement with the typical “we don’t condone this sort of behavior” language.

Lee did not respond to a request for comment, but a manager at the Taco Bell on Wednesday morning confirmed that the employee and manager involved on Saturday had apologized after the incident.

“Normally I would let things like this go but under the current political climate I find it very important to address such issues and voice them loudly and clearly,” Lee wrote.