Has Philly’s beloved cycling classic finally run out of road? It sure seems like it. 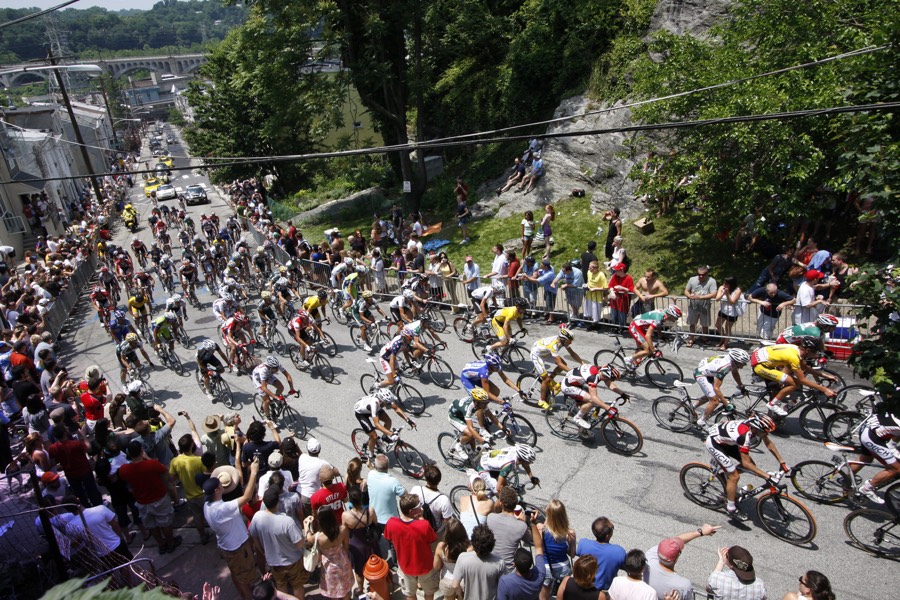 The leader’s pack climbs the Manayunk Wall during the Philadelphia International Championship of cycling in Philadelphia on Sunday, June 7, 2009. (AP Photo/ Joseph Kaczmarek)

Fans, cyclists, and Manayunk revelers had their fingers crossed that the iconic Philadelphia one-day pro cycling race, which got its start in 1985 and took place under the aegis of various corporate sponsors over the years, would return in 2018. After the race was abruptly cancelled early last year by the city over costs, reports last fall raised hopes that the race would indeed be back on. But now it’s mid-February, and those hopes appear deflated. The St. Louis organization that stepped in to promote the race, Foundry Sports Group, was never able to make this year’s pro race happen.

This latest — and what certainly feels like the final — chapter in the Philly bike race story brings to mind the famous T.S. Eliot line: “This is the way the world ends, not with a bang but a whimper.”

When asked if the race, which had appeared on the official race calendars of several cycling governing bodies until it suddenly disappeared on January 23rd, has been cancelled, Ajeenah Amir, a spokesperson for Mayor Kenney’s office, clarified via email: “There is no cancellation. The City’s Office of Special Events has not received an application for the event and we have not had any contact with Foundry Sports.” Fair enough — you can’t cancel something that never got official approval in the first place. So what happened? Was there never even a 2018 race to cancel? Was it all just a dream?

Hopes were high that the race, traditionally held on the first Sunday in June and rebranded for 2018 as the Independence Classic, would be saved by Foundry Sports Group, a St. Louis–based sports holding company and principal member of various professional sports investment, management, and operations firms. Nicholas Mahrt, Foundry’s president and a former Philadelphian, had grown up watching the race during the CoreStates-sponsored years. (Reached by cell phone, Mahrt declined Philadelphia magazine’s request for comment.)

The revered race, which in its heyday served as the men’s Professional National Championship and a stop on the women’s World Cup, had been in decline due to rising costs and withering financial support. It was pulled back from certain death in 2013 when U.S. Representative Bob Brady intervened to build a new coalition of sponsors. After that two-year arrangement expired, the City of Philadelphia became the race organizer before finally calling it quits after being unable to find sponsors to cover the $1 million cost, deputy managing director Jazelle Jones said at the time. With the city out of the picture, Foundry stepped in and began to consider whether the race could be resurrected. Without the city footing the bill for services, signing a title sponsor was imperative to move forward.

Foundry shrewdly reached out to g4 Productions, a highly esteemed New Jersey–based production company run by Robin Morton, who has been involved with the bike race for years. Morton’s company submitted the necessary application on behalf of Foundry to USA Cycling and Union Cycliste Internationale (UCI), the national and international governing boards, to get the Philly race back onto the 2018 race calendar. That’s when we all cheered that the race was back! Appearing on those calendars certainly makes a race seem official. But, with no sponsors stepping forward, the cheers proved premature. Last October, g4 Productions announced it was no longer involved with Foundry Sports and wished them well.

Morton explains how this all looked from her end: “Foundry did not provide us with a signed contract after working with them for months. Foundry did not reach an agreement with the City of Philadelphia to secure services, street closures, and permits. Foundry had not secured any sponsors, to our knowledge, so the financial viability of the race was suspect. For those reasons we informed them we were no longer interested in being part of the project. That was the end of the association.”

Then things went from vague to practically opaque.

Chuck Hodge, the vice president of operations for USA Cycling, promptly contacted Foundry to update the paperwork that had listed g4 as the race contact. This began a months-long email/voicemail exchange between Hodge and Mahrt that got Hodge nowhere closer to acquiring information from Foundry to amend the application.

“Starting in November, I was promised return phone calls multiple times, but they never came,” explains Hodge, who has attended the event many times. “Finally, this year, I wrote a more strongly worded email that we would put them off the UCI calendar unless we got basic information from them. We just wanted to know the viability of event, but when I can’t even get a phone call back, we don’t have a lot of faith it’s going to work out.

“USA Cycling has always had a lot of faith in g4 and especially Robin. Her involvement was one of the reasons we inscribed the event. But now it’s February and we never received the information we requested. … Really basic stuff. We decided we’d had enough. We took it off the calendar.

“The race in Philadelphia has a long and vibrant history. I would get on an airplane tomorrow to make it happen — this race is that important to us. … The various incarnations of the race have been an important part of cycling in the U.S., and we hope to work with an organizer for a return in the future.”

If you’re planning on heading to Fairmount Park on Sunday, June 3rd, don’t expect to see any cyclists sprinting to victory or the whoosh of the peloton rolling past. Look for joggers instead — lots of joggers — taking part in Run Fest.

So is this farewell to the race that put Philly on the international map with the legendary 17-percent grade hill known simply as “The Wall”? To the beer-fueled parties in Manayunk? To the cheering amateur cyclists on Lemon Hill, and to the parade of internationally elite riders — Eric Heiden, Greg LeMond, Lance Armstrong, Peter Sagan, Andre Greipel, Manayunk-native Robin Carpenter — who dazzled the crowds and helped kick off the summer each year?

It sure seems like it. If so, farewell, and thanks for the memories, Philly bike race. Chapeau!