Should Wing Bowl Die With an Eagles Super Bowl Victory?

Whether or not you find it tasteless is irrelevant — the event’s founding purpose was to distract Eagles fans at a time when the team was terrible. 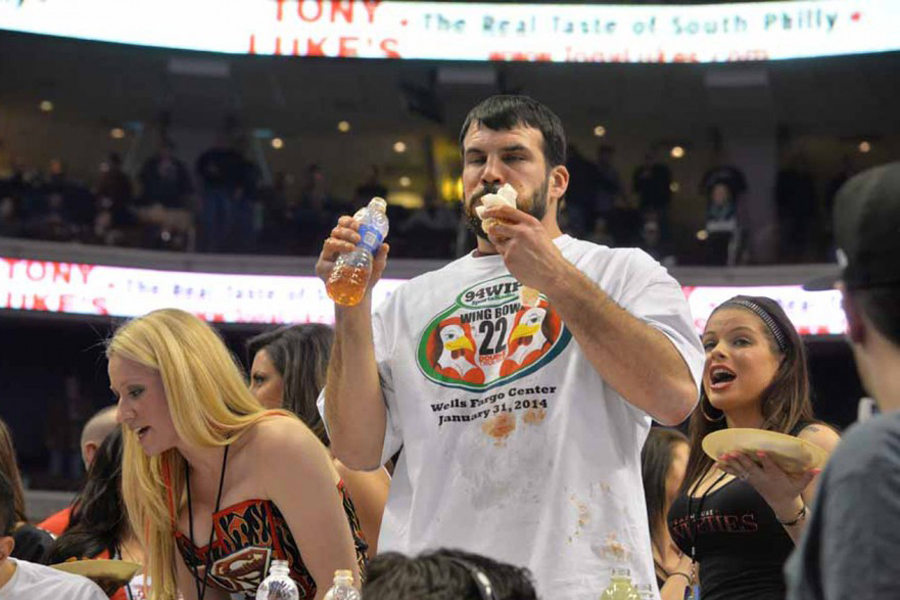 Do you think Wing Bowl should end if our underdog Eagles beat those cheating bastards from New England on Sunday?

I found myself pondering this very question in the week leading up to Super Bowl LII, which also happens to be the week of Wing Bowl 26 – in case that sudsy civic engagement fell off your radar. It didn’t for me, but only because I’m a sports fan and know that Philly’s annual attempt to turn the Wells Fargo Center into a strange meld of Bourbon Street and Buffalo, New York, always occurs the Friday before the Super Bowl.

When I was younger, I can recall listening to Angelo Cataldi and Co. yuk it up on WIP (610 AM back then) as obese men from all over the Delaware Valley piled inordinate amounts of cottage cheese or breakfast burritos into their mouths for a chance to eat chicken wings before an inebriated crowd of their peers. One otherwise uneventful ride to school was made memorable by a particularly desperate Wing Bowl hopeful who licked the wheels of an Acme shopping cart for a shot at wing-eating glory. If that’s not prime middle school humor, I don’t know what is.

But I’m not in middle school anymore, and our team is actually playing in the Super Bowl this year, so forgive me if my focus has been more directed on football than on fowl these days. When morning show host Al Morganti conceived the idea for Wing Bowl in the early ’90s, its express purpose was to capture the attention of Birds fans, since the Eagles “weren’t going to make it to the Super Bowl anytime soon.” With Carson Wentz and Doug Pederson’s bright future together in Philly, it’s not so difficult to envision several attempts at hoisting the Lombardi trophy in the future, is it?

Given your presumed nod in the affirmative, to me that would suggest that Wing Bowl has served its purpose for the past 26 years and effectively run its course. Let Howie Roseman take over from here, guys. It’s not that I take issue with the lurid undertones of the event, because I don’t at all. In fact, as both a Philly native and former New Orleans resident, I can tell you that Wing Bowl is a very similar environment to Bourbon Street in that both serve as a meeting ground for anyone seeking debauchery and revelry. It comes with the territory. And do not judge, lest ye be judged.

Instead, I think Wing Bowl should end solely because it’s past its expiration date. Correct me if I’m wrong, but Wing Bowl 26 has got to be the least hyped iteration of the event in all its years. There are more important issues at hand than getting wasted at 5 a.m. on a Friday. (I’m talking about a toast on Broad Street during the parade next week.) And should that happen, may Wing Bowl die along with the millions of brain cells lost that day. We’ll pour a little out for this bygone token of old Philly, at least.