Sleeping With the Enemy: When Your Wife Is a Patriots Fan

One South Philadelphia couple lives this nightmare every day. 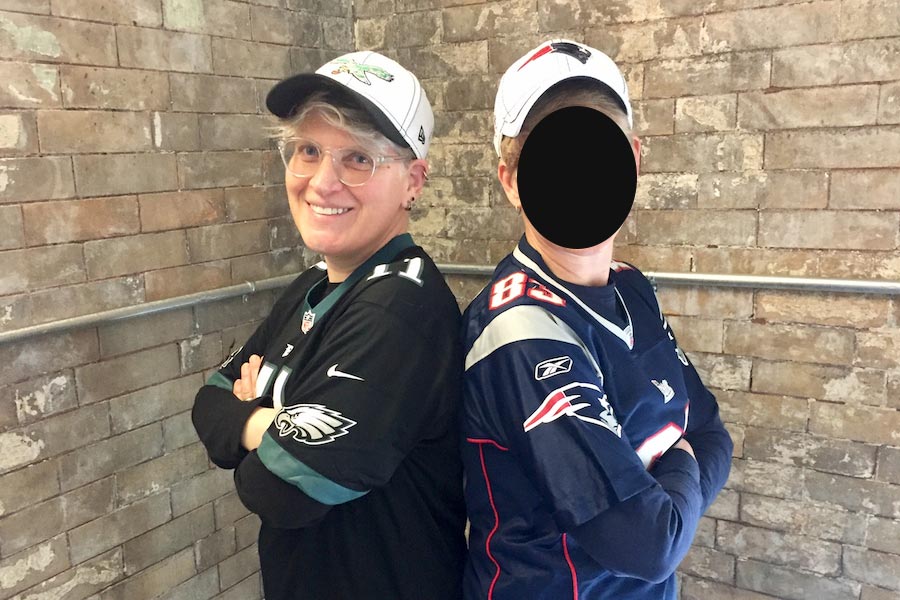 A secret wife and kids. A gambling problem. A sudden desire to turn your basement into an S&M dungeon. These are all things that a spouse can compartmentalize and learn to understand. I’m not alone. There are other people in the same situation, they think. But imagine if you lived in South Philly and your wife was a Patriots fan.

I know, I know. It’s hard to even think about. It’s difficult to “go there.” But for one South Philadelphia couple, this is a nightmare they live every day.

Longtime Philadelphia resident Allison Sacks and her Rhode Island-native wife, “Melanie,” whose real name we won’t use in the interest of protecting her identity, live in a house divided, about a block away from the Melrose Diner. Allison is an Eagles fan. Melanie cheers for the Patriots. OK, so she doesn’t just cheer for the Patriots. She eats, sleeps, and breathes the Patriots.

This is what it’s like talking to Allison and Melanie about the Eagles and the Patriots. One makes snide remarks about the other’s allegiances. They interrupt each other. One will sigh heavily while the other is talking.

When I asked Melanie whether she’s been a Patriots fan all of her life, she replied affirmatively, saying, “I was a fan through all of the bad years — back before it was cool to be a Patriots fan.”

“You see, you see!” Allison jumps in, right on cue. “This is what all Patriots fans try to do. They try to remind you that there was some point 20 years ago when they used to be bad.”

Allison and Melanie first met in 2010 at the National Museum of American Jewish History and began dating a year later. And it wasn’t long before Allison learned Melanie’s deep, dark truth.

“I knew she was a Patriots fan pretty early on,” admits Allison. Naturally, this segues into a story Allison tells to attempt to illustrate what a lunatic Melanie is when it comes to the Patriots.

“I didn’t realize how crazy she was until we were in Rhode Island visiting her family,” Allison remembers.

“Oh, he doesn’t need to hear that story,” Melanie insists. So Allison tells it anyway.

“She made us stay at her family’s house in Rhode Island on a Sunday night just so she could watch the Patriots game with her family,” Allison says. “And we had to work the next morning, so we had to drive back overnight after the game.”

Melanie interrupts to point out that you can’t get some of the Patriots games in Philadelphia if you don’t have some special cable package. And, she adds, “It was a really important game!”

In spite of this omen, the couple wed at City Hall in December 2016. Since then, they’ve done their best to settle into married life together in South Philly, where the neighbors have been surprisingly understanding.

Melanie and Allison have their respective team’s lamps in the front window of their home, and there’s been no issue with vandalism, which they say is most likely because the Eagles lamp is there to balance things out. Melanie has a Patriots bumper sticker on her car, and nobody has keyed it. And when they’re walking their dog together, they wear their team colors.

“Although lately, we’ve been getting some different reactions to her Patriots coat,” Allison says. “We’re at the dog park and people will whisper to me things like, ‘Get rid of her while you still can!'” (Always with a chuckle or a grin, of course.)

As for the Super Bowl itself, they’re going to have some friends over to watch the game at their house. Melanie is calling the game 24-17 for the Patriots. And Allison predicts 31-27, Eagles.

“No way is Foles gonna score that high!” Melanie tells her.

“We’ll see,” Allison replies. “I cannot wait to see Fletcher Cox knock Tom Brady on his ass, and then he’ll look over at the ref with his little What are you gonna do? look that he always gets. He’s going to get knocked on his ass like he never has.”

Then, Allison tells Melanie that if the Eagles beat the Patriots, Melanie has to clean the bathroom.