PHOTOS: Eagles Fans Take Over Minneapolis Ahead of the Super Bowl

Minneapolis is getting a heavy dose of Philly pride — despite some boos, denied restaurant reservations, and truly terrible cheesesteaks. 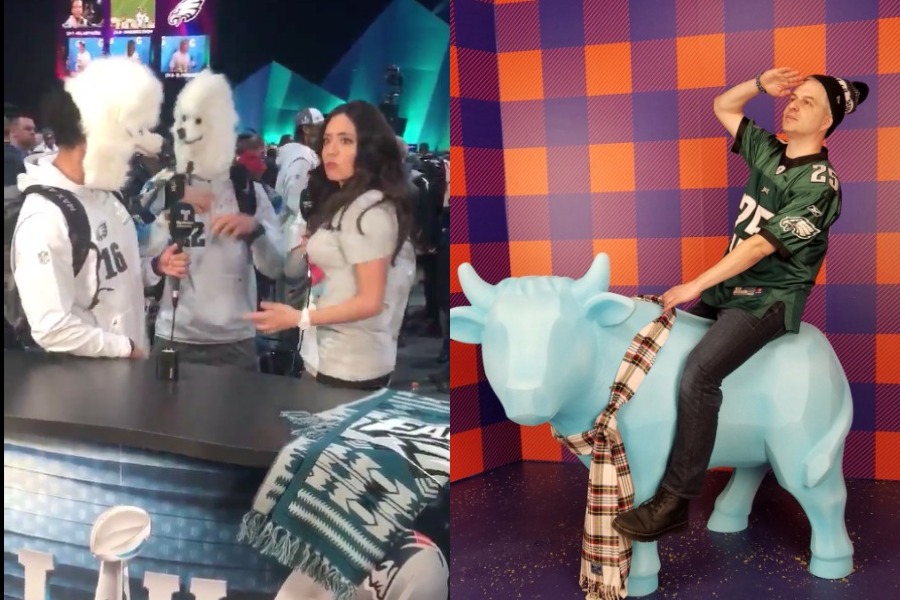 T minus FIVE days until the Super Bowl.

You witnessed craziness in Philly when the Eagles pummeled the Minnesota Vikings on the 19th. Now you’re probably wondering what the scene is like in Minneapolis, where the Birds will square off against the New England Patriots on Sunday.

We’ve compiled a roundup of Philadelphians in Minneapolis, bless their hearts. They’re enduring their fair share of boos and apparently having some trouble getting restaurant reservations. But hey, that’s probably not half as bad as what we put Vikings fans through during the NFC championship game, right? And we hear some folks in Minneapolis really are pretty nice.

To kick things off, here’s footage of the Eagles making their first touchdown in the Twin Cities:

And here’s what some Eagles players have to say about the city. Spoiler alert: it’s really salty – and not just because of the icy weather.

As mentioned, Philadelphians aren’t getting the warmest of welcomes. That’s obvious in the sign for this “bar,” which, evidentially, is not even a real bar.

So I found that mean sign everyone’s talking about. Yes, it exists. No, it’s not what you think it is. The sign is outside downtown Minneapolis’ “Truth Bar,” a rent-able conference space branded by an advertising agency. It’s not a real bar, and it’s not even open to the public! In fact, when I walked by at lunch today, there were exactly zero people inside. Boo. #superbowl

And some other minor issues:

Here at the #SuperBowl store inside the @mallofamerica there is NO #Eagles stuff!!! (Yet) Think the NFL wasn’t ready for US to be here? #Underdogs #FlyEaglesFly #6abcAction pic.twitter.com/CjAsXmuluT

Eagles booed lustily by combined force for Patriots and Vikings fans as they take the stage pic.twitter.com/6Vrv0cF62y

LISTEN: The #Eagles  keep getting booed. Every. Time. They. Are. Announced. #SuperBowl  #SBOpeningNight

Though apparently not everyone is bitter.

Most Eagles fans, in fact, can’t be stopped. There’s plenty of Philly pride in Minneapolis.

What other producer has the @Eagles jamming to @MeekMill on #SBOpeningNight @RickRoss #hialeah #Philly pic.twitter.com/IyfjC6SWMJ

Welcome fans for #SBLII and especially all my #FlyEaglesFly people! Pumped to be a part of #Crew52 to help you around at #SuperBowlLive! pic.twitter.com/7obMIee2Ha

The #Eagles have landed. No beer cans in sight. Just Philly fans welcoming their team to Minnesota. pic.twitter.com/CAvEjZq75U

Including from Eagles themselves.

And some Philadelphians are thoroughly enjoying Minneapolis as a city.

Spotted: a wild group of Eagles documenting their landing here at the Mall of America. @FOX29philly pic.twitter.com/zWMbJCklXk

Philly may have a Super Bowl team, but Minneapolis has a really big mall with an amusement park. pic.twitter.com/rviFfsAl06

Why would I hang myself over the icy Mississippi River? Why NOT? The story from #SuperBowlLive today on @NBCPhiladelphia at 430! #superbowllii #wewantit pic.twitter.com/JGWjdToE4F

We’ve landed in Minneapolis and they are handing out hand warmers as we exit the plane. Yeah, it’s cold pic.twitter.com/RQlOplcwiO

And the city’s lame excuses for cheesesteaks.

We just arrived in Minneapolis, and I’m already calling a flag on the play. #NotAPhillyCheesesteak pic.twitter.com/k4YVU23Sme