In agreeing to security checkpoints, activists say, the event’s white organizers have put women of color and trans individuals at risk. 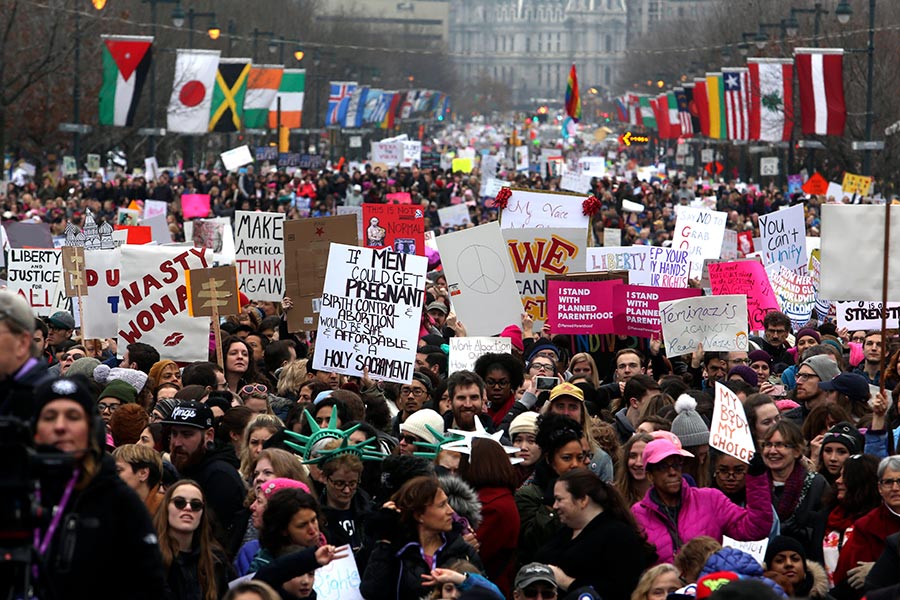 The first Women’s March on Philadelphia in January 2017. Photo by Jacqueline Larma/AP

On Tuesday night, a Facebook post began to circulate calling for a boycott of Saturday’s Women’s March on Philadelphia over concerns about increased police surveillance and security measures that could potentially affect women of color.

The post criticizes the security details announced on the march’s Facebook event page and argues that the measures are “putting those already targeted by law enforcement at an even greater risk”:

The Women’s March of Philadelphia thinks it’s ok to collaborate with the police department to set up security checkpoints and conduct random searches on march attendees, ostensibly stopping and frisking them, putting those already targeted by law enforcement at an even greater risk.

Fuck that. Don’t attend the Women’s March. ***Please share via copy and pasting***

The post was shared by several local female activists, notably women of color:

Several transgender individuals, such as black queer activist Giana Graves, have also raised concerns online about how the march’s security measures “intimidate trans women from even participating.” “I think the first issue is that there’s no trans women organizing the march when it’s supposed to be about having a voice and seat at the table — it seems ironic considering there are no seats for trans women or non-binary folks and the POC voices that are involved appear to be tokenized,” Graves said. “If a trans women was sitting at that table, there would be no police check points for stop and frisk protocols that put us at risk since we are often profiled as sex workers. These measures are also not safe for sex workers considering that a lot of them have been profiled, assaulted, harassed or even raped by cops, with such check points giving them an opportunity to become further traumatized victims of police brutality.”

In comparison, organizers of women’s marches in other major cities, such as Los Angeles, New York City, and Boston, have not posted explicit security protocols, nor did organizers for Philadelphia Women’s March last year.

A Philadelphia Police Department spokesman declined to discuss the planned deployment for the event. (Police officials later clarified at a Friday press conference that officers would not be conducting random searches of attendees.) A spokeswoman for the march sent the following statement: “As a large-scale first amendment demonstration permitted through the City of Philadelphia, all inquiries regarding safety, security and/or related policy for the Women’s March on Philadelphia should be directed to the city’s Press Office.” A spokeswoman for the city told Philadelphia magazine that officials had discussed security measures with the march’s organizers “prior to and during planning for the march, and organizers understood the public safety concerns and our responsibilities in ensuring a safe event” but confirmed that “permitting was not contingent on agreeing to these measures.”

Activists from the Philly REAL Justice coalition argue that the apparent collaboration over intrusive security measures speaks to a larger problem. “The Philadelphia Women’s March has once again demonstrated their disconnect from the concerns of working class black women and their families/communities,” said member Megan Malachi. “The struggle for black women’s (people’s) liberation is inherently linked to the demand for police abolition. By allowing police to play any role in their march, they are ignoring local struggles against police terrorism, and choosing to center the bourgeoisie aspirations of white feminism. Another tone deaf, epic fail.”

“Only a group of white and/or class privileged women could have thought such a thing was a good idea, but it goes to show that the status quo works for them (minus a few minor inconveniences such as Trump) way more than it works for the women who will be most impacted by their working with the Philadelphia Police,” added Deandra, a member of the coalition who does public relations for them.

In a separate statement, the city sent the following in regards to activist concerns:

“The City of Philadelphia and the Philadelphia Police Department are committed to facilitating and protecting the First Amendment rights of all citizens, regardless of race, cultural background, age, gender identity and sexual orientation. For the safety of all in attendance, eventgoers can expect to encounter security protocols similar to those in place at other large-scale outdoor events, concerts, festivals, etc.  In no way will the Philadelphia Police Department, or any other City agency, limit the ability of attendees to lawfully and peacefully participate in this event.”

The Women’s March on Philadelphia is expected to go on as scheduled on Saturday, January 20th, on the Benjamin Franklin Parkway.

This post has been updated to reflect that, after publication, representatives of the Philadelphia Police Department clarified that officers would not be conducting random searches of march attendees. For more on march security logistics, see here.