Clay: Activists are commemorating the protest this weekend. But what do we have to celebrate? 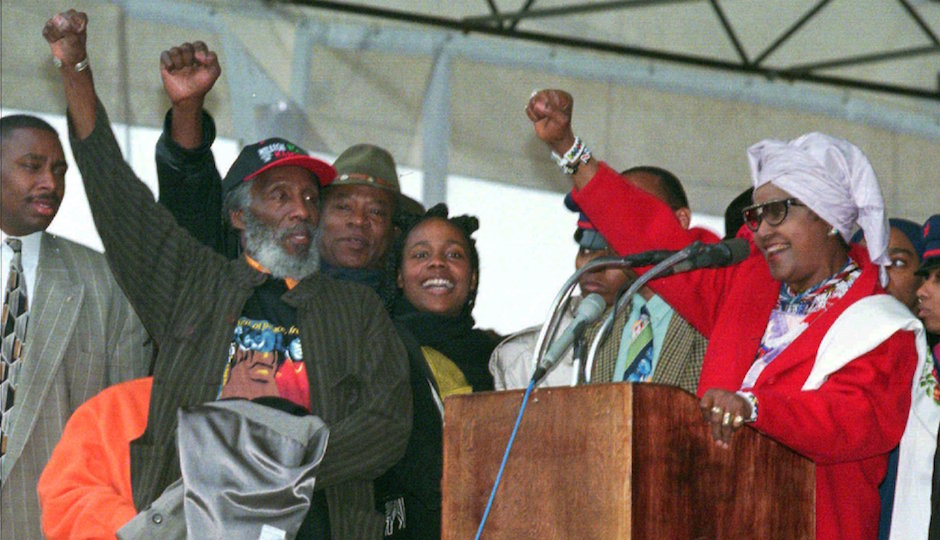 Winnie Mandela, former wife of South African President Nelson Mandela, right, and activist Dick Gregory raise their fists at the beginning of her keynote speech at the Million Woman March in Philadelphia in 1997. | Photo by AP/H. Rumph, Jr.

When I was a reporter for the Reading Eagle Times, I was sent to cover the Million Woman March in Philadelphia.

I had a car back then, so I drove down from Reading the night before, hung out with my family in Jersey, and went to the march the next day, where I was supposed to meet up with a group of women from Berks County.

For them, it was a chance to be among folks who understood them, understood their issues, and didn’t view them as problematic. Berks County is roughly 77 percent white, according to the 2010 Census, and while it had a pretty sizable Latinx population at the time, it was also a hotbed of organized hate group activity.

Heck, the former local leader of the Ku Klux Klan even had his own show on the cable access channel.

So I wanted to hear what they thought of women like activist Winnie Mandela, Congresswoman Maxine Waters, actress Jada Pinkett Smith and Assata Shakur, who spoke from her home in Cuba where she lives in exile.

When I talked with the women, they felt as if they had gained some strength from being out there—the cold, damp weather notwithstanding. It was the kind of strength they needed to fight the racism and oppression they had to deal with as people of color living in Klan country.

Living there myself, I understood that. I would later write a package of stories about the county’s hate group problem that showed me that things were more challenging than I thought.

This Wednesday marked the 20th anniversary of the Million Woman March. On Sunday, it will be celebrated with a march from City Hall to the President’s House on Independence Mall, the memorial to George Washington’s slaves. The march will be the culmination of a week’s worth of events, including workshops, panel discussions and cultural happenings.

It promises to reconnect the Black community with the spirit of that march and use the solutions suggested in the various gatherings to make things better for Blacks around the country. Or at least that’s how I understand it.

But you’re going to have to forgive me if I say I’ve heard this song before, so I’m not all that optimistic.

Maybe it’s because I’ve been through one too many march commemorations.

But if all that it was designed to do was make folks feel good, we have tequila for that.

Over the last few years, I’ve covered commemorations of various marches. Because I’m an independent journalist, I’ve had to pay for my own bus fare and accommodations to report on these events. But I’m having a hard time seeing how it has managed to translate into things that provide lasting benefits to a community that has no time to go on a march for a march’s sake.

In a city with a 26 percent poverty rate, much of it among people of color, taking to the streets needs to have an endgame. So while I can appreciate the Million Woman March and the spirit behind it, my hope is that spirit is just the beginning. When we commemorate the 25th anniversary of this historic occasion, I want to cover it from a business, community program, or something else that people put together afterward.

Denise Clay has been a journalist for more than 25 years, covering politics, education and everything in between. Her work regularly appears in the Philadelphia Sunday Sun and the Philadelphia Public Record, and she is also on WURD Radio’s “Wake Up With WURD” daily with Mark Kelly Tyler. Her work has also appeared on the BBC, XO Jane and Time.com.