Wish him well and honor him for his service, but be thankful that he never became president. 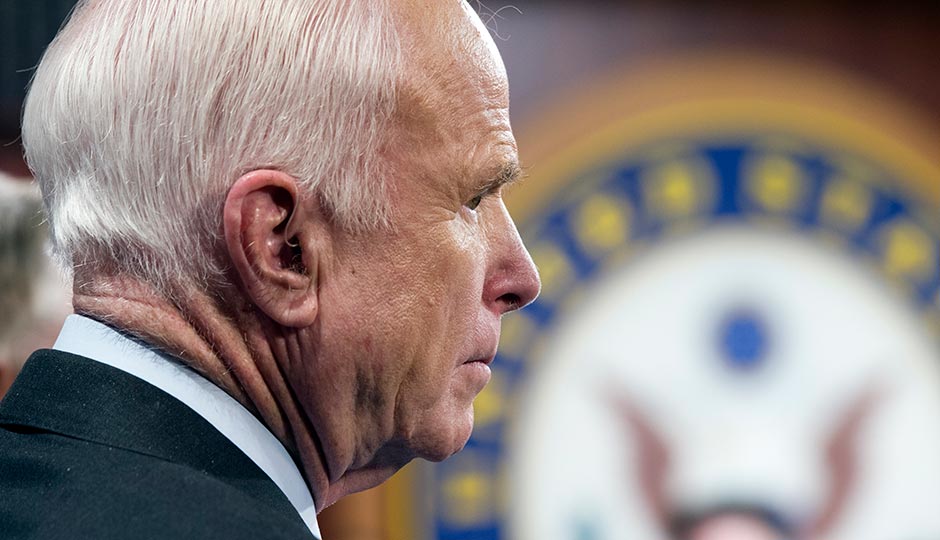 On Monday evening, the National Constitution Center will award U.S. Sen. John McCain the 2017 Liberty Medal. The award ceremony committee probably sensed it had to move fast if it wanted to acknowledge McCain’s contributions to American politics and history: The senator has been diagnosed with malignant glioblastoma and may not have long to live.

There are people who hate John McCain as virulently as some hate President Trump. During the 2016 presidential primaries, conservative commentator Ann Coulter said that if McCain became the Republican nominee, she would vote and even campaign for Hillary Clinton. “Clinton is more conservative than McCain,” Coulter said. “He pretends to be a Republican.”

McCain is called a warmonger by some and “a god in his own mind” by others. Some Vietnam War prisoners of war dispute McCain’s account of his time as a North Vietnamese POW. McCain’s enemies maintain that he was not tortured by the Viet Cong but instead cooperated with them, earning the nickname “Songbird” because he couldn’t stop talking to his captors. McCain admits that as a result of continual torture over five years, he eventually bowed to the wishes of his captors by signing false confessions and helping with anti-American propaganda. Though most POWS at that time also capitulated to the North Vietnamese, disgruntled POWS still won’t cut McCain any slack and say that he and Jane Fonda are “cut from the same piece of cheese.”

Some even lay part of the blame on McCain for the horrific 24-hour fire aboard the USS Forrestal off the coast of North Vietnam in July 1967, which left 134 sailors dead and 161 wounded. There is simply no proof that McCain did anything careless to help create this tragedy.

McCain inspires extreme passions, so much so that when he announced that he was undergoing chemotherapy for brain cancer, the world of Twitter exploded in hate-filled tweets, with people saying that they were looking forward to his death — though not everyone agreed: “McCain is not an evil man,” conservative commentator Ben Shapiro stated, “and you are not at war with him. So stop with the crap about how you want John McCain to die, what you would really prefer is for John McCain not to be elected.”

And that’s the ticket: Wish him well and honor him for his service, but be thankful that he never became president, even though as one looks at the panoply of US politicians, McCain stands alone as a shining example of the ultimate political maverick. This is the man, after all, who bucked his party by voting to retain Obamacare and whose views on immigration parallel those of “open borders” California Gov. Jerry Brown. In many ways he’s the Republican equivalent of former Sen. Joe Lieberman, the only Democrat to support George Bush’s Iraq War.

McCain’s reputation as erratic, unsteady and angry is why we should be glad that he never became president. Though he is these things, it is easy to understand how the physical and psychic wounds he suffered at the hands of the Viet Cong may have made him this way. Think of the organic decline of the great Mohammad Ali, who was once verbally and mentally sharp but who became the opposite of that after years of head trauma. Like his erratic nemesis, President Trump, McCain has at one point enraged everybody, including Jimmy Carter when he said “I thought Jimmy Cater was bad, but he pales in comparison to this president [Obama},” to which Carter replied, “That’s a compliment coming from a warmonger.”

It always goes back to war with McCain: his injuries, what he would do to keep the peace, even if that “to-do list” means declaring war with every nation on earth. The magazine Mother Jones, for instance, put together a list of the countries that John McCain wanted to invade. McCain is the one, in case you forgot, who is still on record as saying that Russia’s Putin is still more dangerous than ISIS.

This is head trauma at its worst, and yet despite everything, John McCain still deserves our respect. He is, as others have noted, a true imperfect American hero, full of holes and inconsistencies, but a complex and amazing person who deserves the award at the National Constitution Center.