INTERVIEW: The Philly-Area Man Hailed as a Hero in Las Vegas Shooting 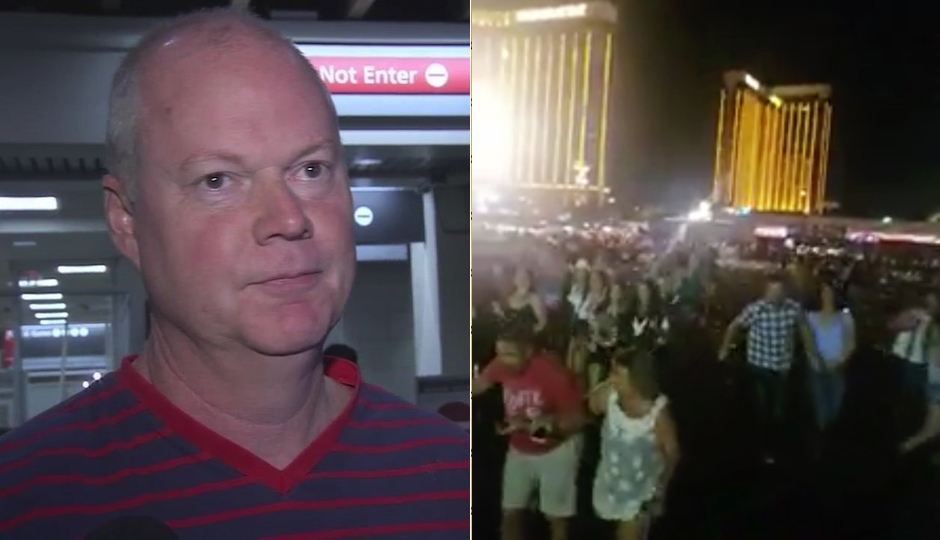 As Sunday’s tragic mass shooting in Las Vegas unfolded and in its immediate aftermath, there were many, many heroes. And on Monday, the White House singled out one: Main Line financial planner Mike McGarry. White House press secretary Sarah Huckabee Sanders said, “Mike McGarry of Philadelphia laid on top of students at the concert to protect them from the gunfire.” On Wednesday afternoon, we caught up with McGarry, who grew up in Northeast Philadelphia and graduated from Archbishop Ryan High School.

Hi, Mike. I’m so glad you are back home safely. What brought you out to Las Vegas in the first place?
I went out there with my wife, who is a big country music fan. And, you know what they say: happy wife, happy life. We just went out there to have fun. We have two grown kids who were not with us, even though some reports said that they were.

And when did you realize something had gone horribly wrong?
It really wasn’t until this huge crowd of people — I’m guessing maybe 1,000 people — sort of trampled over us. By the time we were able to get up and start moving, both my wife and I realized … we had noticed a couple of people in an outdoor tent sort of thing, and we ran over to that and found a girl who had been shot. She was bleeding really badly. People didn’t know what they were doing. They were just panicking.

Understandable given the situation.
Yeah, my wife has been an R.N. for 20 years. She got a belt that someone had been wearing and put the tourniquet on the girl, and she was actually able to stop the bleeding. And then more people came running into the tent, and I pulled over a picnic table to use as a shield for all of us. People were screaming, and they were all a lot younger, in their 20s and 30s. I got on top of them to block them. It was just crazy.

It sounds like in all the chaos, you were able to stay pretty calm and focused. Do you have any military or law enforcement background?
Zero point zero. Hopefully, I’m a halfway decent person, and I believe that a majority of the people out there are decent. Hopefully if you see somebody bleeding out, you’re going to try to help them. I didn’t do anything heroic. I didn’t do anything magnificent. But by stopping that girl from bleeding out, my wife did. I’ve gotten a ton of calls. Somehow, someone got to my mom, who is in her 80s, and she gave up my cell phone number. I’ve heard from CNN, MSNBC, Anderson Cooper, you name it. But I’m not going to get back to any of them. You’re the only person I’ve responded to.

What went through your head when the White House press secretary used the words Mike McGarry?
I heard they did that but I haven’t seen it. I’m not the most political person in the world. I don’t have a problem with people owning guns.

Given that mass shootings have increased so dramatically and now that you’ve been literally in the center of one, does it make you change the way you look at the country, the world?
It’s all very hard to fathom. I don’t actually understand how anyone could do this. And I definitely don’t understand why people can get their hands on these types of guns — or how they can be allowed to adapt them — that can fire thousands of rounds into a crowd in minutes.

Not to get too personal, but you’ve witnessed something incredibly tragic. Are you and your wife OK?
We haven’t discussed it. We’ve been back 30 or 40 hours at this point. Yesterday, I went out and relaxed with a bunch of my golf buddies. Today, I’m trying to get back to work. If I’m working, it will be out of my mind. I’m trying not to watch these events again or the news or anything. I certainly think about all of this, though, as soon as I put my head down to my pillow.

Note: Mike McGarry is a financial planner based in Bala Cynwyd. He asked us not to reveal where he lives.