A kicker, you say? You’re just flat-out wrong if you don’t think Akers deserves the honor. 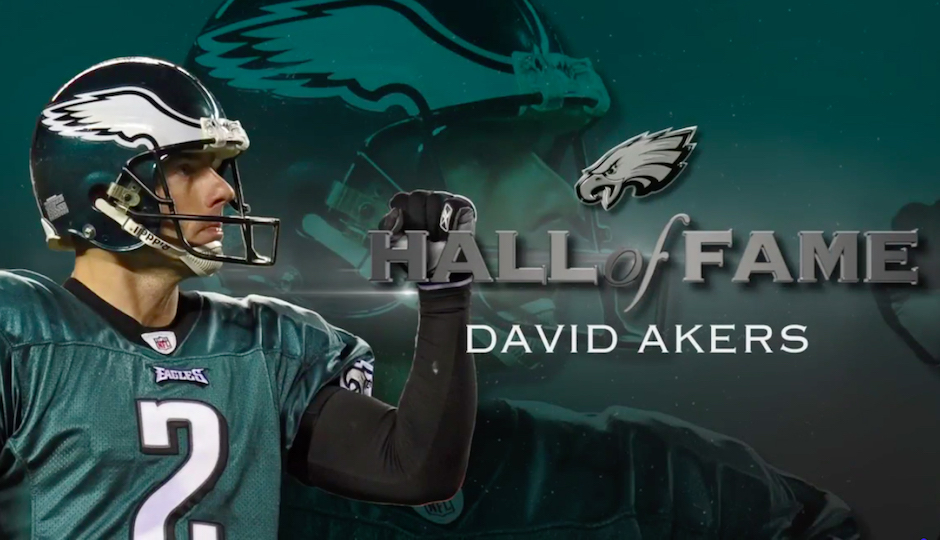 A kicker in the Eagles Hall of Fame? Really? Yes, really.

Eagles owner Jeffrey Lurie announced at an event on Wednesday night that the latest inductee into the Eagles Hall of Fame will be David Akers, the franchise’s all-time leader in points scored. After bouncing around the league before ultimately sticking with the Birds in 1999, Akers played 12 seasons in midnight green and appeared in more games than any other Eagle in history.

“David Akers embodies everything we look for in a player both on and off the field,” Lurie said last night at the team’s Taking Flight for Autism fundraiser. “He was talented, reliable, tough, and of course clutch. He played a major role in the success of this franchise during his time here, but he also loved this city and our fans and he made a tremendous impact in the community. We are proud to enshrine him alongside the greatest figures in Eagles history.”

On the surface Akers was only a humble special-teamer, but in reality he was much more to the team than just your everyday kicker (i.e. the guy who fans wouldn’t be surprised to see stuffed in a locker).That onside kick to start off the 2000 season in Dallas is unforgettable. And remember his clutch performance in the 4th-and-26 game against the Packers in the 2004 playoffs? Kicked a 37-yard field goal after that incredible connection from Donnie to FredEx to send that game into OT, and then hit another to win it. Ice cold.

The Eagles as a franchise have more playoff wins with Akers (10) than they do without him (9) in their entire 84-year history! Man, that is a pitiful stat, but it also shows the importance of Akers to those teams of the early-2000s that came oh-so-close, but always just short of the ultimate goal. Without Akers, it’s safe to say the Birds wouldn’t have even had as much success back then as they did.

“This, to me, is just all humbling,” Akers said. “I just can’t share the gratitude that I have for Mr. Lurie, the Eagles organization for giving me three contracts to play here, which is unheard of to play that long, and the town has supported me just unbelievably. Tonight is a reconnection of friends, wishing Doug Pederson the best luck as he was my first holder back in ’99. I’ve lost hair and his hair is gray.”

Akers earned five Pro Bowl nominations during his time in Philadelphia, the most for any Eagles kicker. He was part of nineteen playoff games, six division titles, and a trip to Super Bowl XXXIX. The induction ceremony for Akers will take place on October 23 when the Eagles take on the Washington Redskins on Monday Night Football.