To celebrate, watch these epic commercials from the ‘90s featuring the Big E and his iconic number 88 jersey. 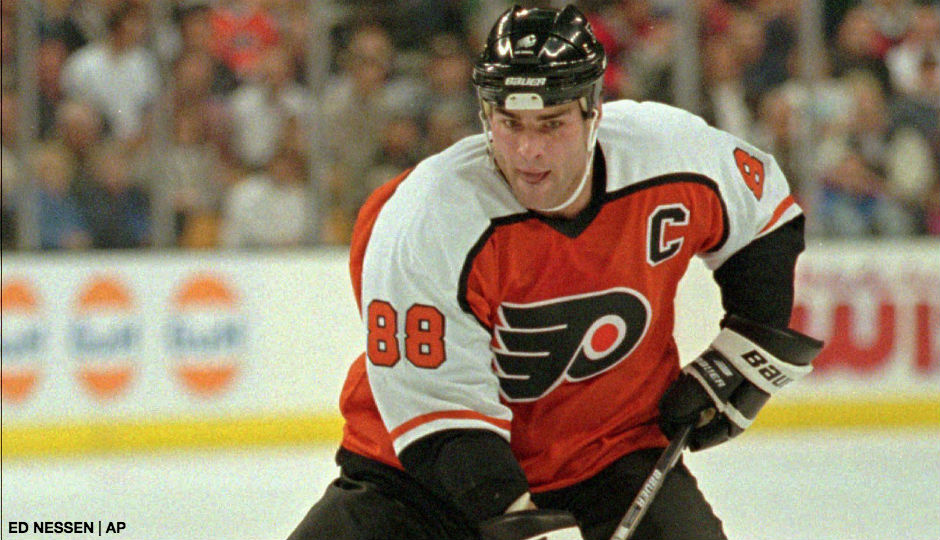 As a Philly sports fan that cut his teeth in the 1990s, Eric Lindros was an early hero of mine. When healthy, the former Flyers captain was electrifying – perhaps the most dominant player during that era of hockey, with apologies to Wayne Gretzky. A player like Lindros was and still is a rarity in the NHL. His combination of size, speed and skill made it practically cheating to play as him in the pixelated video games of the time.

But, of course, Lindros’s health was always a big question mark. His style of play left him susceptible to punishing open-ice hits like the one famously delivered by New Jersey Devils goon Scott Stevens that all but ended his career in Philadelphia. Lindros suffered SIX concussions between 1998 and 2000, when brain injuries were far less of a concern in sports. Those health issues ultimately caused a major rift between him and the organization that I fear has wrongly tainted Lindros’s legacy.

After making appearances at several recent Flyers alumni games and his induction into the Hockey Hall of Fame last year, the Ontario native has been fully welcomed back into the fold and will soon have his iconic number 88 hanging from the rafters. Lindros will join the select group of legends to have their numbers retired in a pre-game ceremony on Jan. 18. The honor is well deserved, despite the fact that Lindros never fully reached his potential as an NHL player or won us that elusive third Stanley Cup we’re still waiting on.

Lindros’s Flyers career was full of peaks and valleys – yet he remains one of the most memorable players not only to wear the orange and black, but in NHL history. The Big E was named to the NHL’s 100 Greatest Players list as part of the league’s centennial anniversary in 2017. He was the 1995 Hart Trophy winner, scored the fifth-most points in Flyers history and was the toughest dude to ever bleach his hair – hey, it was the ‘90s.

So let’s make a pact to stop bringing up the negatives when discussing Lindros, a true Flyers legend who really is the franchise’s second-best player and captain overall. There’s a reason so many fans still wear 88 to games today – myself included. Instead, I’d much prefer to talk about whether or not Lindros would’ve made a great tight end for the Eagles or how he really would’ve reacted if a squirrelly equipment manager turned his lucky jersey pink…