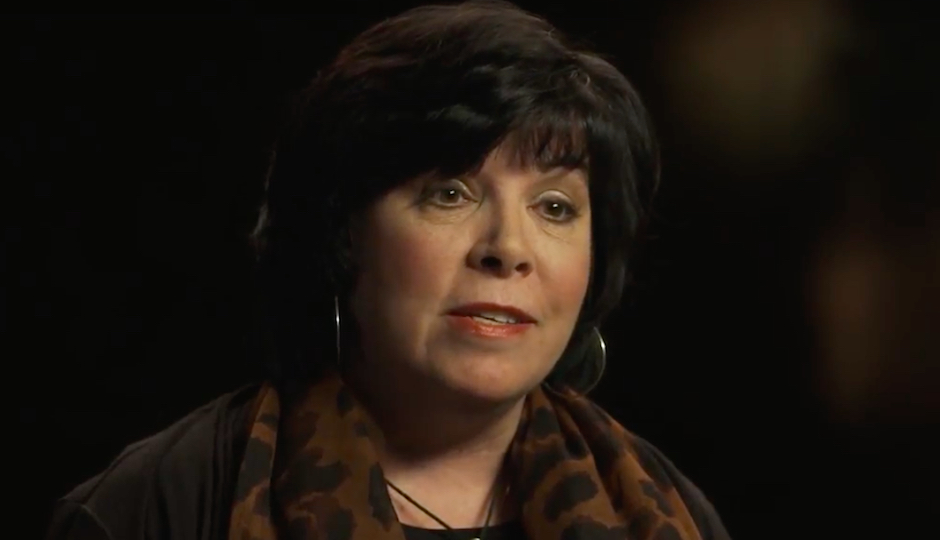 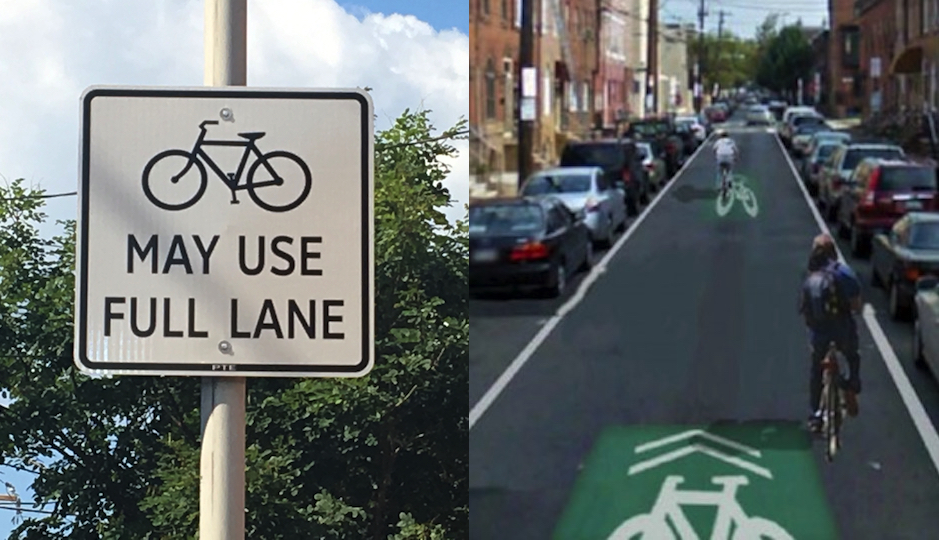 Left: One of the new signs in South Philly. (Photo by Haley Weiss) Right: A rendering by the Bicycle Coalition.

The signs have started going up in South Philadelphia, reminding residents and drivers that bicycles “MAY USE FULL LANE.” Next up, big green bike-lane arrows are slated to be painted right down the middle of 13th and 15th streets.

Naturally, not everybody is happy about this, and the most vocal opponent of the new South Philly bike lanes has got to be longtime Girard Estates resident Jody Della Barba, a well-connected conservative who was once Frank Rizzo’s secretary. Della Barba, still a government employee, has been taking the fight to social media (a recent post on Taking Our South Philadelphia Streets Back created quite the tizzy), and so we thought we’d hear what she has to say.

You seem to be spearheading this latest campaign against the more disrespectful bicyclists out there —
Which ones are respectful or respectable? The only respectable bicyclists I see are usually old people or really little kids.

There are laws in place to ensure good bike citizenship, right?
Our police are already so thin, and there are so many other quality-of-life crimes and regular crimes to deal with, but the bike laws are never enforced. Offenders don’t get a ticket. They just get a warning.

So at the end of the day, what’s the big deal?
These people are so hellbent on commandeering our streets in South Philly, and the reality is that bikers cause accidents, too. Cars don’t set out to go up streets the wrong way. Cars don’t ride on pavements. Bikes do both of these things.

And now they want us to just let the bikes ride in the middle of the street. I don’t see a lot of bikes paying attention to laws. I see them fly through lights. I see them go around the corners real fast. They don’t stop at stop signs. Few and far between actually pay attention to the laws.

I get all that, but most people just curse at the bikers and go about their day. This seems to be more personal for you.
When I was younger — this never went out of my mind — my uncle’s mother was walking to her store. She was in her 90s. This guy comes around the corner on the pavement on his bike and hits her. She broke her hip and died of pneumonia in the hospital three weeks later. That might have happened 50 years ago, but it’s the same thing now. I consider this vehicular homicide.

Are you mostly concerned with South Philly here?
No. I work in Center City and see a lot of stuff there. A bike will swerve, a car has to slam on its brakes, the bike winds up hitting the car and then just rides away.

I was recently walking with my boss crossing 12th near Filbert, and somebody on a bike almost hits her. I grabbed the bar — what is the bar that goes from the seat to the handlebars? we used to call it a sissy bar, but you can’t say that now — well anyway, I grabbed that bar and said, “Hey, are you crazy? You almost hit her!”

I see stuff like this every day. I was walking down Chestnut Street, there are all these people riding on the pavement. Adults. Adults riding bikes in neighborhoods on pavement. And what about those crazy kids on the Expressway. It’s just out of control.

I know the hipster types like to ride bikes. Sure, you’re saving the environment or whatever, but you have to assimilate. You have to follow the rules.

So what are you doing about it?
I’ve talked to my state rep and state senator. With a car, the driver has to be licensed and have the car insured and registered. If a car hits a bike or a child, the car is responsible. Well, if a bike hits the car or a child, the bike rider should be responsible.

All bikes should be registered with the city and have some sort of tag so that a witness can report the bike to police if something happens. And if you want to ride a bike in the city, you should have to carry liability insurance. Just like a car.

Well, all that would take a while. What are you going to do in the meantime?
I’m going to start taking pictures of bicyclists breaking the law and post them. Every time something happens these days, somebody pulls out a cell phone. So I’m going to do that.

You don’t obey the law? You want to come to our neighborhoods and take our streets over with your bikes? Then I’m going to say something.