Lenny Dykstra Rants on the Baseball Hall of Fame’s Hypocrisy 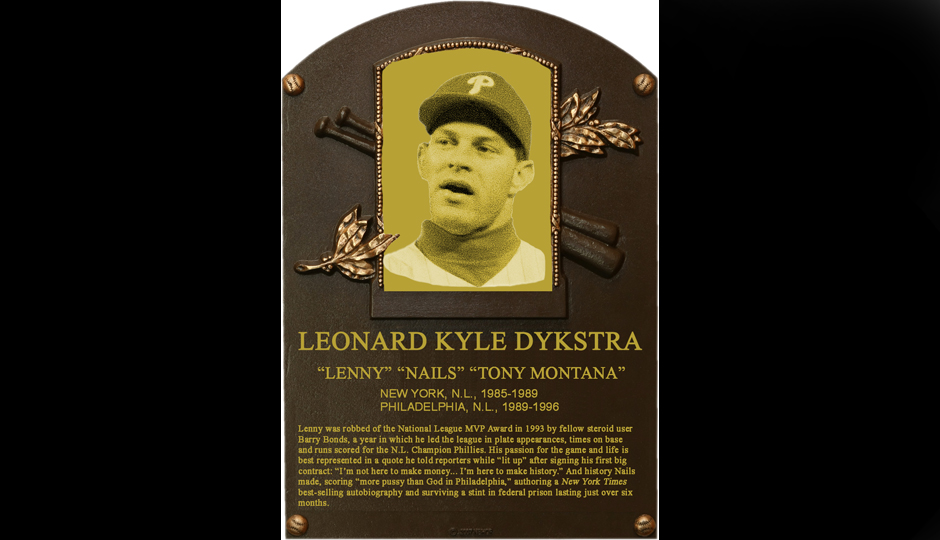 The Baseball Hall of Fame inducted its latest class on Sunday, with underwhelming stars Jeff Bagwell, Ivan Rodriguez and Tim Raines among the honorees whose plaques now join legends of the game like Babe Ruth and Jackie Robinson in Cooperstown.

Our old pal Lenny Dykstra is no fan of the Hall or its voters. Nails finds the whole thing a bit hypocritical – a stance I happen to agree with. See, I grew up watching baseball in the ‘90s when pumped up sluggers were mashing home runs and pitchers were tossing straight gas on the mound. It was a way better game, no denying it.

Lenny obviously played during that era, and partook in certain performance enhancers himself, so he’s a bit of an expert on who from that time is most deserving of enshrinement along with the spit-ballers, amphetamine-takers and other cheats that comprise the Hall’s membership.

“The Baseball Hall of Fame is tarnished because they gotta figure out whether or not it’s the Hall of Fame for baseball. I don’t know what their definition is – but it’s all about the fucking numbers,” Dystra told Philly Mag. “You either got them or you don’t. The bottom line is there is a problem here.”

“What’s the threshold? It’s a fucking joke. I got escorted out of there last year, you know. I was all lit up and I was pissed. I said, ‘I want to ask all of you motherfuckers a question… what makes someone a bad enough guy not to get in the Hall of Fame? Wait – this guy took three amphetamines a day and he’s fine but not this guy because he took five?’”

It’s Nails’ opinion that Barry Bonds and Roger Clemens deserve be inducted based on their downright historic statistics – steroid-enhanced or not. Dykstra says Bonds is a Top 5 player even if you only look at his presumably pre-steroid Pittsburgh Pirates years.

“Best player to ever play the game,” Dykstra said of Bonds, Major League Baseball’s Home Run King and the man who edged him out for National League MVP in 1993. “Biggest dick ever to play too.”

As we now know in hindsight, it wasn’t just hitters who were juicing back then. Pitchers were using steroids too to help speed up their recovery from injuries and add a few more miles per hour to their fastballs. Everybody assumed Clemens did ‘roids to prolong his career – a fact that Dykstra himself confirmed while laughing about how Clemens was ultimately vindicated.

“The thing that’s ironic about Clemens is he shows how hypocritical the Hall is,” an animated Dykstra croaked. “He WON! In the hardest fucking court in the country. He beat those motherfuckers! Said he didn’t do steroids – not guilty! But he pissed someone off with those hearings or whatever, and again that’s what it comes down to I think.”

Lenny told us the game is as clean as it can be today with how stringent Major League Baseball’s drug testing is.

“You’re talking to Tony Montana here,” Nails said. “Trust me on it. Drugs are out.”

But the Dude is still left wondering what the decision process is for writers selecting who gets into baseball’s hallowed hall.

“I don’t understand what their plan is. I’m a player. I deserve to know what the fuck’s going on. The problem there is what’s the threshold. They’ve got to come up with something. You can’t get a little bit pregnant – and trust me on that, I would know.”