A new piece poking fun at the neighborhood’s fishy name just went up on Frankford Ave. 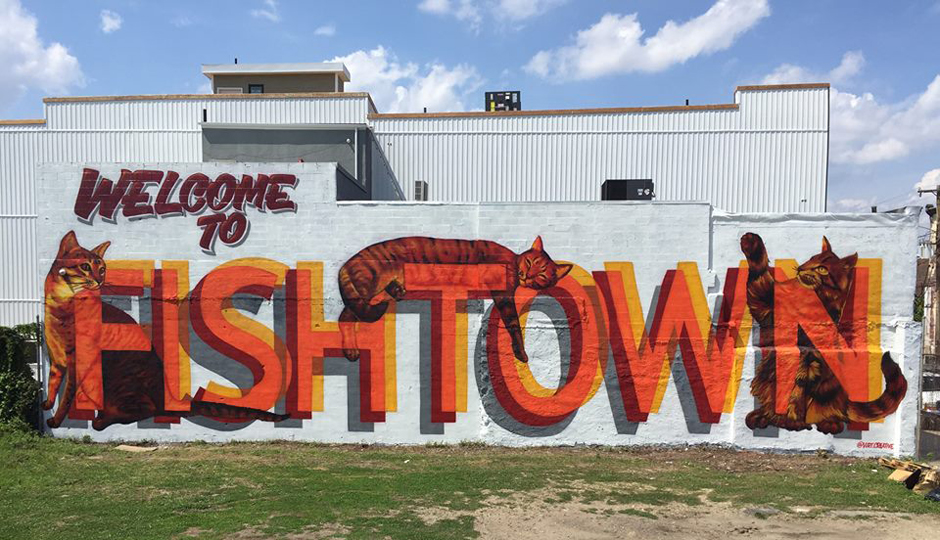 The spray-painted mural, which features cuddly tabby cats welcoming you to Philly’s hipster mecca, is the first in V.U.R.T’s neighborhood-focused Welcome to… series. The piece – found on the side of a building in an empty lot adjacent to Barcade – is a cheeky play on the community’s fishy name.

“If I were a cat, what better place to hang out than a place called Fishtown,” muralist Evan Lovett said.

I dont work all the time. But when I don't, I still put in work. Had a blast designing and painting this new mural for @vurt.creative in #fishtown #philadelphia along side some good friends. #nevernotworking #phillyart #vurt #notmuralarts to see finished shot check out @evanlovett_art and @vurt.creative

Lovett collaborated on the mural’s design with Jersey artist Glossblack, who incorporated his lettering with Lovett’s signature Sharpie style. The planning process was “extremely tedious,” Danielle Wong, V.U.R.T’s director, told Philly Mag. But the piece was completed in just two short days despite the difficulty. Finishing touches wrapped up on Sunday.

“What we wanted to do was create a landmark gateway to Fishtown,” Wong said. “Our main goal was to beautify the community and get residents involved. We believe we were able to do that.”

JG Real Estate gifted the building to V.U.R.T for the mural. Donations from Rust-Oleum Cares and Sherwin Williams of Fishtown helped fund the work along with contributions from the local community.

V.U.R.T.’s next piece is a continuation of the organization’s Local Critters series in South Philly. Wong told Philly Mag that mural would feature a bird of some sort – possibly sparrows.

“We still have to get the property owner to sign off on their space,” Wong said. “I don’t want to give too many details. It’s all still being figured out.”

Meanwhile, V.U.R.T is holding a fundraiser on July 28 at Tattooed Mom on South Street. The art show features a number of local artists whose work is for sale. Proceeds will go toward V.U.R.T’s initiative to supply local schoolchildren with art supplies.