Is This a Pro-Trump Toynbee Tile In Philly? 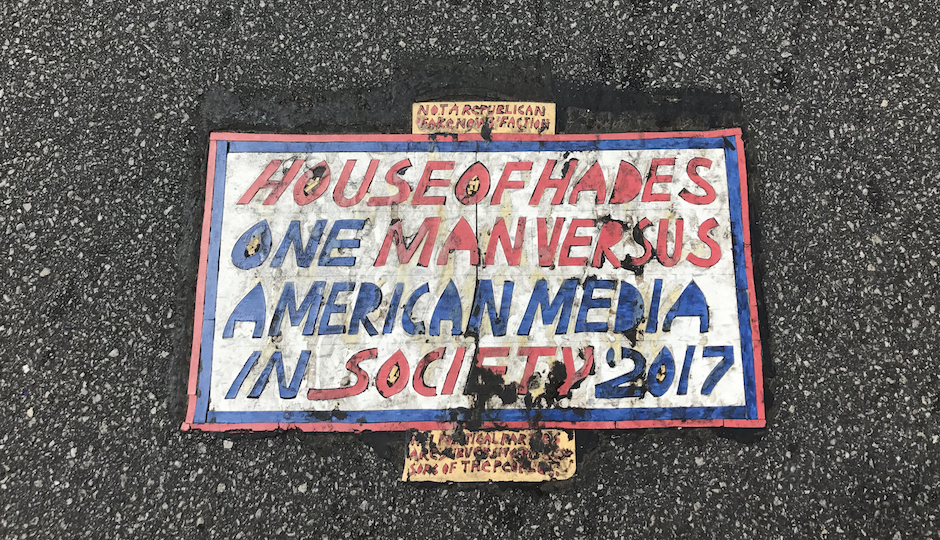 The tile in question, at the intersection of Broad and Arch streets in Philadelphia. | Photo by Zach Kocis

On Tuesday morning, a photo began making the rounds on Facebook — well, in Philly Facebook anyway — showing what appeared to be one of those weird and sorta legendary Toynbee tiles, bearing a message that some think might be pro-Trump.

“Yuck!!!” declared Philadelphia resident Katy Otto. “Folks with Toynbee knowledge, this pro-Trump abomination isn’t a legit tile is it?! Spotted at Arch and Broad. Just trying to confirm it’s not the real deal. I hope not!”

We can’t quite figure out what it says on the bottom. 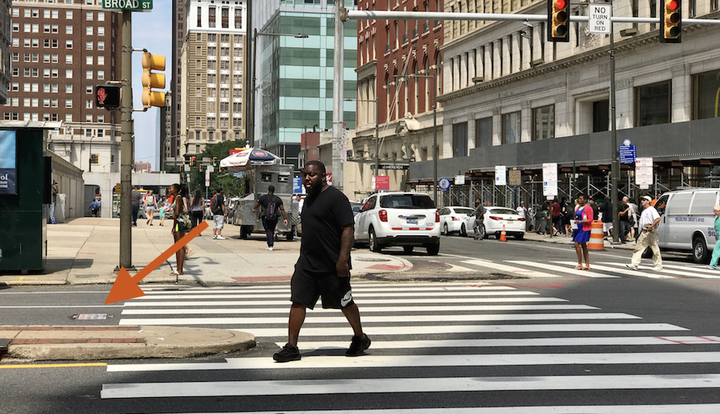 Now, if you have no clue what a Toynbee tile is, you should probably go read the Wikipedia page or watch the fascinating 2011 documentary Resurrect Dead: The Mystery of the Toynbee Tiles. But basically, these forms of vandalism-artwork have popped up in many locations in Philadelphia as well as in other places around the world, all with some strange message.

According to the Toynbee tile experts that we talked to — yes, there are more than a few Toynbee tile experts in the world — they are most definitely not from the hand of the original Toynbee tile progenitor, whose identity has never been positively confirmed but who is believed to still be active and living in the Philadelphia area. (Again, watch the documentary.)

It turns out that there are a bunch of Toynbee tile copycats around the world (who knew?), and this appears to be the work of a person — and possibly now a collective — who goes by the name House of Hades. 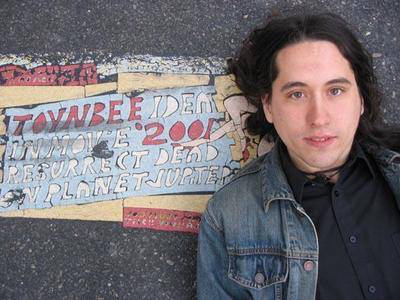 “House of Hades is, by far, the most prolific copycat,” says expert Colin Smith, pictured here with a Toynbee tile, who co-wrote and appeared in the documentary. “Of the thousand or so tiles that we’ve seen, there have really only been two or three where we weren’t sure whether it was the original artist or a copycat.”

“Same medium, different artist,” he says. “If there is a connection to the original tiler, I don’t know it. I assume they work entirely independently, but the original tiler is probably at least aware of House of Hades.”

And both men say that while this message could, perhaps, be interpreted to be about Trump, the phrase used actually dates back to the days when Trump was just a laughable pop culture figure, not the leader of the free world.

“We started seeing that same text on tiles ten or eleven years ago, I’d say,” explains Smith. “I know that the phrase appeared on House of Hades tiles as early as 2008 and possibly 2007 or 2006.”

Smith found a photo on the Internet that appears to show a 2009 tile with the exact same language.

As for the original artist, Weinik says he wouldn’t be very surprised if he is actually a Trump supporter.

“In his early years, he advocated for a totalitarian state to take on the Jupiter colonization project,” Weinik told us. (Jupiter colonization project? What? Again, watch the documentary.) “If I follow his logic from back then, you needed an all-powerful central government to build the momentum required to colonize Jupiter and then to build the technology to resurrect all dead humans.”

Stay with us here …

“He tried hard to get the USSR in on the effort through shortwave broadcasts into Russia,” Weinik continues. “He also hates the press, is pretty steeped in conspiracy, and pretty often includes anti-Semitic/homophobic tirades on the tiles.”

These days, Weinik works for Mural Arts. And Smith is pursuing his doctorate in philosophy at the University of Kentucky.

“But every so often, the phone rings,” says Smith. “Something happens and someone has a question about Toynbee. It’s weird.”