Will USA250 Be Philly’s Biggest Party Yet? 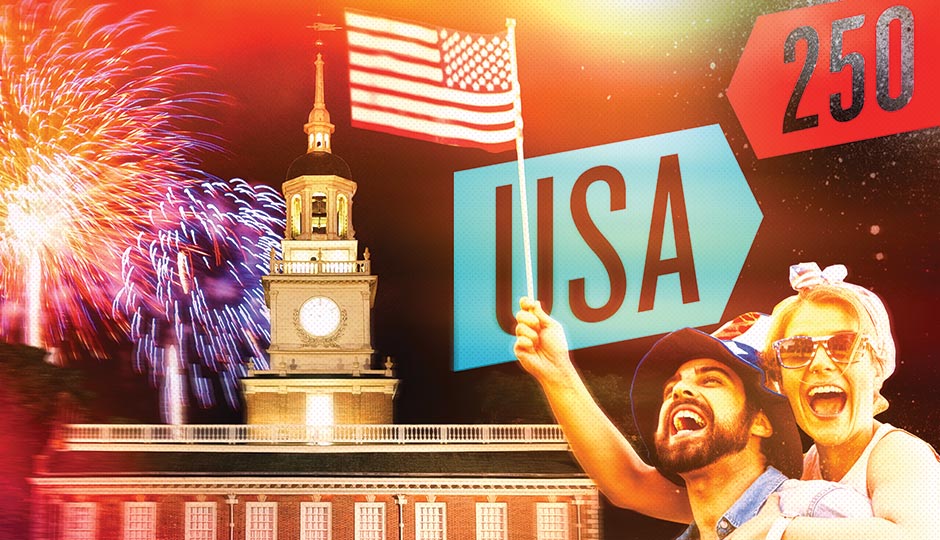 Salty air. Nature’s euphonious soundtrack. Spotty cell reception. One has to wonder how many great ideas start on a boat. In 2008, Andrew Hohns, a Philadelphia lifer who always has the city top of mind, was sailing — or, rather, attempting to — in Penobscot Bay in Maine with his buddy, Chris Chimicles. From their rambling discourse, a realization: America’s 250th anniversary was approaching — and Philly should play host. The other big birthdays — 100, 150, 200 — all were here. “The discussion,” recalls Hohns, “was one great outcome of an otherwise windless afternoon.”

They found their wind back in Philly, and by 2010 had formed a nonprofit with a mission to claim the celebration as ours. Not D.C.’s, or Boston’s, or New York’s. Early bird gets the worm.

Hohns and Chimicles made two smart moves early on. The first was to call their movement USA250, since #sestercentennial and #bicenquinquagenary are really lousy hashtags. Next, they got a bunch of bigwigs (Sam Katz, Congressman Bob Brady, Ed Rendell) pumped about the idea.

When this magazine last reported on USA250’s progress, it was 2013, and legislation that Brady had introduced in the House in 2009 to make this thing official was, well, stuck. A reassessment was in order. “The realization in 2015 was that there had to be an official process,” says USA250 executive director Jon Grabelle Herrmann. “If we wanted to get a law passed, it had to be bipartisan. The question of ‘Is there a central site in the country?’ was almost premature.” And, maybe, too small-minded. Our world will be even more interconnected in 2026. In an era of aggregation and over-sharing, it doesn’t feel right to claim exclusive ownership. Plus, as our 2013 article asked: Why mess around with local government? Frank Rizzo’s Bicentennial botch-job hasn’t been forgotten. “Even if we get two million people in Philadelphia, there’s 320 million other Americans,” says Grabelle Herrmann.

That’s when USA250 stopped playing event planner and started acting like a CEO. A new bill, HR 4875, sponsored by Representatives Patrick Meehan and Brady, set out to create a bipartisan public/private commission to do the actual planning — and make the stakeholders in the 250th nation-spanning. President Obama signed the bill in July of 2016. The U.S. Semiquincentennial Commission — a Pennsylvania-heavy group made up of eight members of Congress, 16 private citizens (including Comcast’s David L. Cohen, Equus Capital Partners’ Daniel DiLella, and Mariner Investment Group’s Andrew Hohns), and nine federal officials — has a year to submit a plan to whoever is sitting in the Oval Office next summer.

Where does this leave the USA250 vanguards? The organization will help with fund-raising and engagement (as in its Gen250 young friends program), plus make suggestions about what this all could look like. One early idea: caravans crisscrossing the country showcasing the best of American arts, food and innovation. Technology (virtual reality? Google Glass?) will play a huge role. There will be lots of parties and events in lots of cities throughout the year.

Yet despite all the “think globally” talking points, USA250 still hopes the commission will see our city as the heartbeat of this epic shindig. Some of the big-deal events that USA250 would love to see happen: having the yearlong celebration culminate here; holding the MLB All-Star Game at Citizens Bank Park; routing the caravans to converge in Philly; staging a World’s Fair-like situation with all the states (and some foreign nations) represented. This could mean infrastructure projects in Philly, and game-changing gifts. (In fact, the first major gift was announced in late June — the Daughters of the American Revolution will donate $380,000 to plant 76 new trees at Independence Park for the event.) But these would just be recommendations, as the commission really has the final say. That is, except for one detail in the bill that ensures all of this starts in Philly: By law, the commission’s meetings must take place at Independence Hall.

Published as “Our Biggest Party Yet?” in the July 2017 issue of Philadelphia magazine.