There were boxing robes, coaches in fedoras, and Owls running up the Art Museum steps. 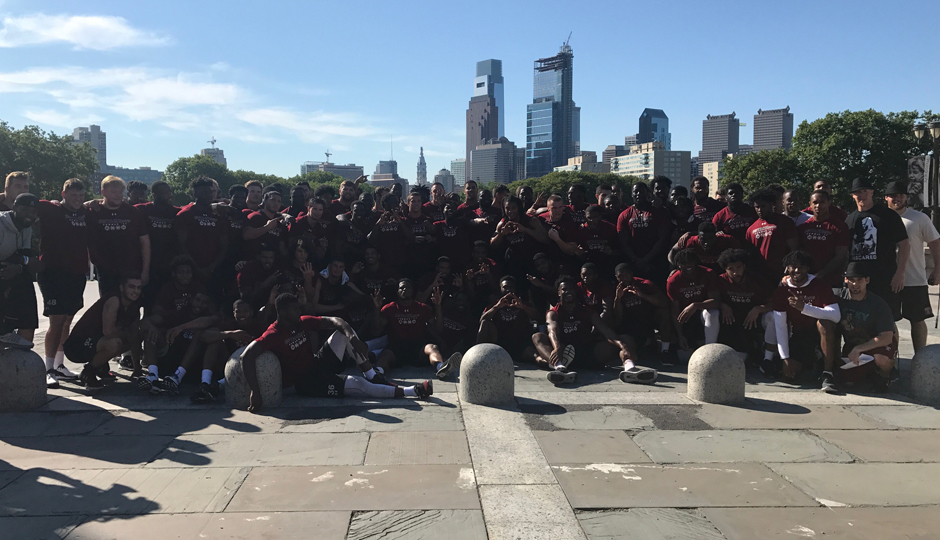 David Feeley is the head strength and condition coach of Temple University’s football team and he loves Rocky. Inspired by Sly Stallone’s unlikely 1976 classic, Feeley tossed on a Balboa-esque fedora and put his Owls through a special workout on Wednesday in tribute of the beloved boxing movie franchise.

“This is a tough city, and this workout replicates what a really tough movie character did,” Feeley told 6ABC. “I know it’s just the movies but Rocky is a timeless, tough movie… Why wouldn’t you want to come to the steps to work really hard?”

Drills up the Art Museum steps are standard for any Rocky-themed workout, but I must say the boxing robes the players wore before pumping iron were a nice touch. Although I don’t remember Clubber Lang’s gym ever looking as pristine as the Owls’ facility on Diamond Street…

“When they have a chip on their shoulder and they have a huge challenge ahead of them – they want to do it,” Feeley said of his players. “And it if it ain’t hard enough they want to keep going.”

The Owls surprised some people last season, following up their successful 2015 campaign (in which they upset Penn State and hung in there with Top 10 ranked Notre Dame) by producing an identical 10-4 record. But that was all under former head coach Matt Rhule, who left North Philly behind for Baylor University.

Practically a local already, no need telling new coach Geoff Collins who to draw strength from to continue that success: