Cheltenham’s Mark Smith was given his own jersey and got to hang with a couple of Flyers at their practice facility. 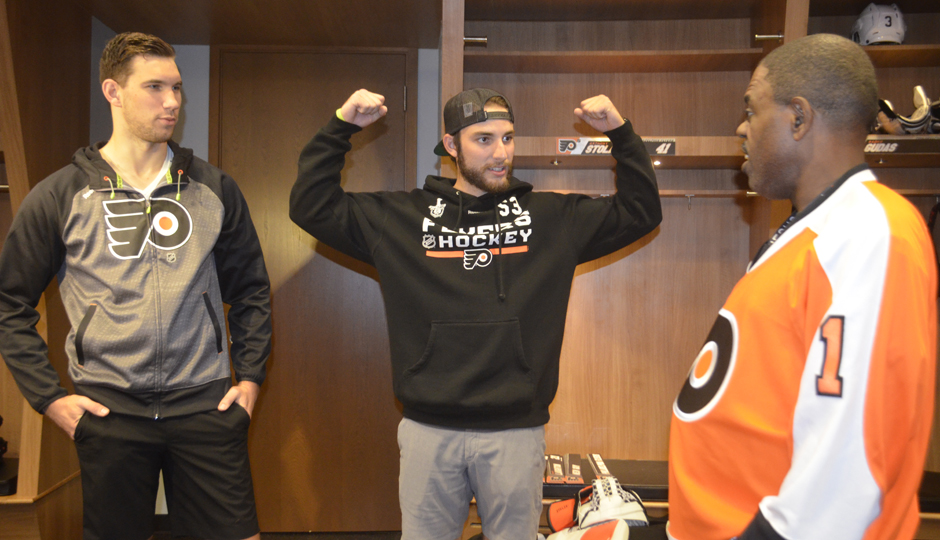 I was so distraught the first time I saw the video of those awful kids sucker punching Mark Smith, an intellectually disabled Cheltenham man. The smiling and carefree 38-year-old was completely blindsided by the youths’ act of cowardice on Memorial Day, and their betrayal of his innocence truly broke my heart.

My immediate thoughts after viewing the footage of course centered on Smith himself. Was he hurt? Is he getting the type of help he needs? What I really felt was that somebody ought to do something nice to help boost Smith’s spirits after going through such a traumatic event.

“The video was something I had watched and I just wanted to do something for the guy,” Zack Hill, the Flyers’ senior director of communications, tells Philly Mag.

So Hill reached out to defenseman Shayne Gostisbehere, who jumped at the opportunity to host Smith at Flyers Skate Zone in Voorhees, N.J. Goaltender Anthony Stolarz was also there to show his support.

The Flyers gave Smith his own personalized jersey and took him on a tour of the team’s practice facility on Wednesday, including a behind-the-scenes look at their locker room. Hill says Smith is a big professional wrestling fan, and he loved when Gostisbehere and Stolarz took him to the part of Skate Zone where matches are held.

Great day getting to meet and hang with Mark Smith, such an amazing and strong person. pic.twitter.com/9JxqC32Me7

Smith was also gifted a gym bag full of Flyers goodies and gear – which he said he plans to share with kids from his neighborhood.

Police say two of the juveniles involved in the brutal viral attack have been charged with criminal conspiracy, simple assault and reckless endangerment of another person. Two other boys who watched the assault won’t face criminal charges.