Forget Trump and Macron — We All Suck at Handshakes

Just admit it — you're as bad as the president at this daily trial of masculinity. 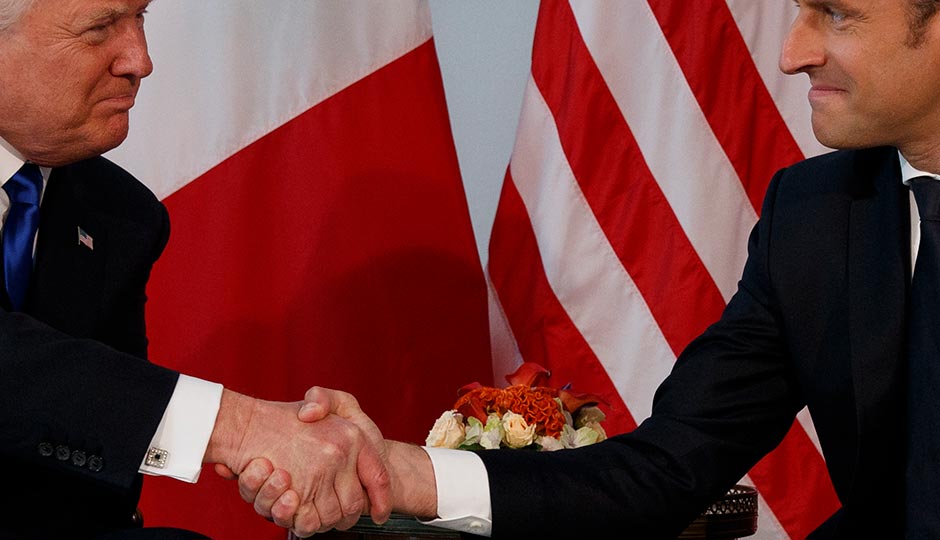 President Donald Trump shakes hands with French President Emmanuel Macron during a meeting at the U.S. Embassy in Brussels on May 25th. Photo by Evan Vucci/AP

If you’re honest with yourself, you know this: You suck at handshakes. I totally do. And so does Donald Trump. I sympathize.

Trump had a few, very type-A handshakes with French president Emmanuel Macron this week that caught the world’s attention for their comic vigor. And this wasn’t our president’s first handshake drama: He famously avoided shaking hands with Angela Merkel at a White House meeting in March, and had a bizarre yank-and-move interaction with Canadian prime minster Justin Trudeau in February.

Look, I’m a guy, and to a guy, handshakes are one of the few expressions of masculinity we have left in what has become an increasingly emasculating society for us. When I shake hands with another guy, it’s a little like a stare-down. Sure, it’s always friendly and professional, but when you strip away all the niceties, a handshake is the chance for one guy to assess whether he could potentially kick the other guy’s ass if he absolutely had to. For me, the answer is always … never. But at least I get a moment to fantasize about it. Guys like to fantasize about kicking other guys’ asses. At least I do.

So, like Trump, I’m totally about the firm handshake. I get revolted when a guy gives me the limp hand, like an old fish. I get this a lot from British guys, for some reason. My wife is British, and she agrees, so don’t try and argue. I was taught the art of the masculine handshake by very masculine men when I younger and in the … ahem … Boy Scouts. (Now, now — stop that.) Older, more experienced men in their 20s showed me back then that men give firm handshakes and look each other in the eye when doing so. I was told that a handshake reveals a lot about a man – his inner strength, his vigor, his toughness. I never forgot this lesson and apply it to this day.

Donald Trump is all about this. He, like me, is from the business world, and he likely received the same advice. “Your handshake demonstrates your power,” I can imagine the younger Trump’s father saying to him. “Make it firm, robust, and substantial. Always look the other guy in the eye. Don’t let him think for a minute that he’s got the upper hand in this relationship.” Right? All guys, at some point growing up, are taught this. We’ve gone well beyond the days of duels, jousts, and affairs of honor. The handshake, ESPN, and Batman are all that men have left.

Handshakes are even more awkward with women. Women are smarter than men — they don’t buy into this testosterone baloney that I’ve just been writing about. To them a handshake is just a handshake.

When I meet a woman for the first time in any environment I, of course, shake hands — but it just doesn’t feel right. Whatever happened to those days when men bowed and kissed a woman’s hand in greeting? Imagine if I did that the next time I was introduced to a senior manager at Microsoft who happened to be female? I’d be up on charges within 30 seconds. Yet secretly I bet many women — even in 2017 — would enjoy a man courteously bowing and kissing their hand, if only because it’s a throwback to and era of gallantry, honor, and respect. I bet I’m right. But no, I’m not going to try it. I want to keep all my teeth.

If you’re a woman that I’ve met a few times and have become friendly I might — just might — give you a quick hug in greeting instead of a handshake. Does that sound creepy? It’s not intended to be — it just seems more natural. OK, it’s probably creepy. I don’t know. But I do that. So now you can stay clear.

Handshake etiquette is tough. I don’t get it. Neither does Trump. And neither, I’m guessing, do you.