Eyewitnesses claim that the man jumped a curb in Kensington, hit a kid, tossed four bags of heroin out of the SUV, and then tried to get away. But police aren't so sure about all that. 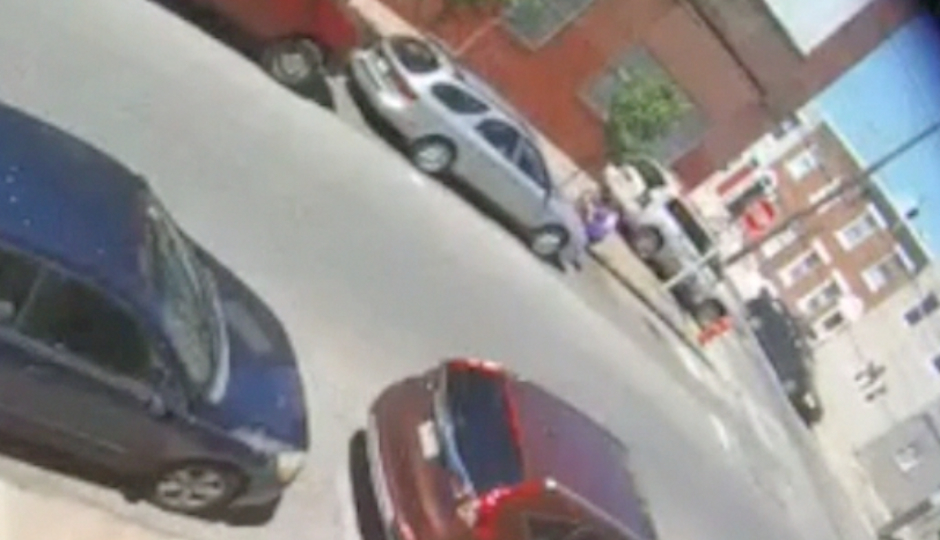 An image from the surveillance video. The light-colored SUV can be seen on the sidewalk, just seconds after allegedly striking a child.

Tuesday was almost a tragic day for a woman and her young son in Kensington. A light-colored SUV jumped a curb and hit the child, neighbors say, and someone inside the car allegedly tossed four bags of heroin out the vehicle just after it happened. And now the neighbors want to know why no one has been arrested.

The scary incident occurred around 11:20 a.m. The surveillance video below tells part of the story.

A few seconds into the recording, you’ll hear a loud noise. That’s the SUV barreling onto the sidewalk along Huntingdon Street between Gaul and Cedar streets. Though it is not seen in the video, the SUV hits a car, knocks over a tree and strikes a child, according to witnesses. You can hear his mother scream repeatedly.

The SUV stops just to the left of the video frame momentarily, while the child and his mom move into the frame and into the street, out of harm’s way. Then, the SUV continues down the sidewalk to the corner. 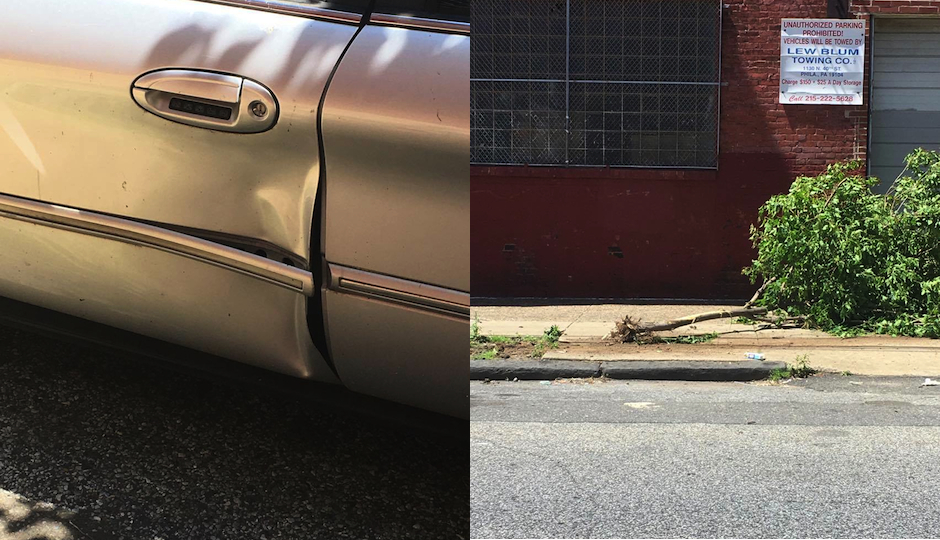 Neighbors say the SUV took this tree out by the roots and also caused damage to another car on the block.

“What is going on?” asks Kelly Macias, who lives on the block and came to her front door when she heard the loud noise. (The surveillance video was taken from Macias’ property.)

“He just rammed right into my son,” the woman appears to reply. The audio is not completely clear, but Macias confirms this is what she said.

The SUV goes to the end of the block and into the street, where it stops in the middle of the roadway.

While a bystander ran up to the boy to see if he is OK and Macias called 911, the SUV took off, according to eyewitnesses. The video ends just as the SUV begins moving again, and according to Macias, there is no footage after that for about a minute due to a technical glitch.

Neighbors claim that as the SUV began proceeding down Cedar Street, the driver tossed something from the car and the passenger jumped out to see if the boy was OK. The SUV made a quick right onto Harold Street, a small alley that runs parallel to Huntingdon, behind Macias’ house. The SUV stopped on Harold Street with two blown-out tires, say witnesses.

A group of neighbors say they followed the SUV, and the driver came back to Huntingdon Street, leaving the SUV on Harold. One of the witnesses went looking for the object allegedly tossed from the car and came back with four unused bags of heroin.

A cop car and an ambulance showed up quickly, and the boy was taken away in the ambulance. Witnesses say he was conscious and did not appear to be seriously injured but that the EMTs were concerned about possibly internal injuries because the SUV struck the boy’s abdomen.

As for the four bags of heroin, two witnesses we spoke with say that the man who found the drugs tried to give them to the first police officer who responded to the scene but that the cop refused to take them.

“The cop wanted nothing to do with it,” claims Macias. “He just told the guy to get rid of it. He didn’t want to any paperwork, I guess.”

Philly Mag was unable to identify the man who found the drugs — neighbors say they didn’t recognize him — but eyewitnesses say that he told them that he was running late for work, so he passed the heroin on to Al Schiele, who lives on the block.

“We told the cop that the driver had drugs,” says Schiele. “But he just didn’t care. I said, ‘Do you want to take these so you can lock him up?’ And he just shook it off. He said that he didn’t find them, so it doesn’t even count. It’s hearsay, because he didn’t go into the guy’s car and find them. He just walked away and told me to put it in my pocket.”

Because what’s a little more heroin in Kensington, right?

Frustrated neighbors called in for a police supervisor, who came to the scene. “We got mad,” says Schiele. “And they sent us a commander who took the baggies.”

Schiele and Macias both say that about 40 minutes transpired between the first cop showing up and the drugs finally being confiscated by a supervisor.

In the end, a moving violation was issued to the driver of the SUV, but no arrests were made. The SUV was impounded through the city’s Live Stop program, either because the car was unregistered or the driver was unlicensed — a police spokesperson wasn’t able to confirm which.

Police also weren’t able to tell us the condition of the child or what hospital he had been taken to, because the paperwork was unclear. And while the heroin was seized (well, eventually), it doesn’t amount to much legally speaking due to chain of custody and other issues.

All that’s well and good, but neighbors still can’t understand why no one was taken to the police station. After all, if I drove my car up onto a sidewalk, hit a kid, and then drove away, I damn well would expect to at least go in for some questioning.

“This was just an accident,” explains Captain Sekou Kinebrew of the Philadelphia Police Department’s public affairs unit. “Someone struck a child, but that doesn’t mean a crime was committed.”

But what about the allegation that the driver tried to flee the scene? Doesn’t that make this a hit-and-run?

Not necessarily, according to Kinebrew. He says that the driver, who did not appear to be intoxicated in any way, told police on the scene that he only drove away because neighbors began threatening him.

“He ran out of fear,” says Kinebrew. “People’s emotions get up. If I’m that person and people are coming after me aggressively, I’d leave too.”

But the witnesses we spoke with say that is absolutely untrue, and if indeed the SUV drove away at the moment that it appears to in the video, then the footage would seem to back up the neighbors’ side of the story.

“There were only three of us out there when this happened,” says Macias. “People didn’t really start coming out until a few minutes later. Was the mom angry? Sure she was. She was yelling, ‘You hit my son!’ and you can also hear her saying, ‘Stop! Stop the car!'”

But Macias and Schiele both insist that no one harmed or threatened to harm the driver or the passenger at any time.

“Never in a million years would I have imagined that the police would handle it this way,” observes Schiele. “It all boils down to one thing: laziness.”

We did ask Kinebrew why on earth a cop wouldn’t take drugs that someone was trying to turn in.

“If that did happen, we will retrain the officer,” Kinebrew told us, adding that the department is currently working to identify the cop in question. “But that’s why we have supervisors. A supervisor was called in and the drugs were, in fact, confiscated.”